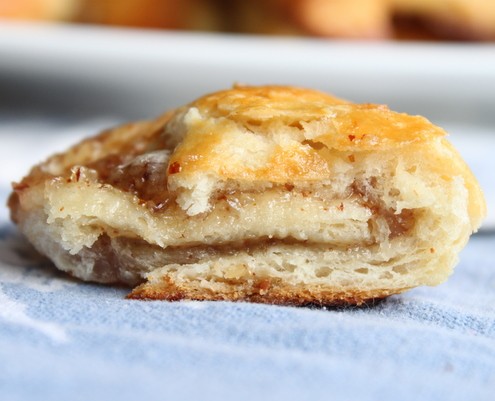 Making croissants is a time consuming process. Making these almond crescents from Kelsey Hilts is much quicker, and still utterly delicious.
By Kelsey Hilts

These flaky, buttery pastries in the shape of a crescent are essentially croissants. Crescent-shaped breads date back to the Middle Ages and there are many variations around the world but the modern-day croissant finds its origin in 19th-century Paris.

Croissants (also known as crescents)are traditionally made with a yeast dough that is layered and rolled with butter (a process called laminating).  This recipe which comes from a family friend simplifies the process, having you cut the butter into the flour and then minimally mix it with the yeast batter to keep the dough light and flaky.  The dough can be refrigerated for up to four days which allows you to make the dough ahead of time and then bake croissants to order.

I like to make an assortment of flavors, leaving some plain and filling the rest with sweet and savory ingredients such as jam, Nutella and ham & cheese.  But these almond crescents oozing with melt-in-your-mouth almond filling are my favorite.

1. Dissolve the yeast in the warm water.  Add the evaporated milk, salt, sugar and 1 egg and mix until combined.  Add 1 cup (99g) flour and beat to form a smooth batter.  Blend in the cooled, melted butter and set the batter aside.

3. Cover the bowl with plastic wrap and refrigerate the dough for four hours or up to four days.  Then, knead the dough on a lightly-floured surface for 6 turns.  Divide the dough into four parts.  While you shape one part, return the rest of the covered dough to the refrigerator.

4. Working with one-fourth of the dough at a time, roll the dough into a circle with a 17-inch (43cm) diameter.  Cut the circle into eight pie-shaped wedges.  Spread almond filling on the wedges.  Then, starting with the outside edge, loosely roll each wedge toward the inner point.  Shape the rolls into a crescent and place them point-down on an ungreased cookie sheet, leaving 1 1/2 inches (4cm) of space between each croissant. 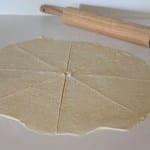 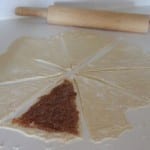 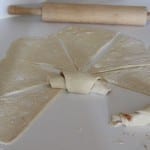 Lightly cover the croissants with a towel and let them rise at room temperature for two hours or until the dough has doubled.

Mix 1 egg and 1 Tbsp (14ml) water in a small bowl.  When the croissants have finished rising, brush the top of each croissant with the egg-water mixture.  Bake them at 325 degrees for 20-25 minutes or until they are light golden in color. 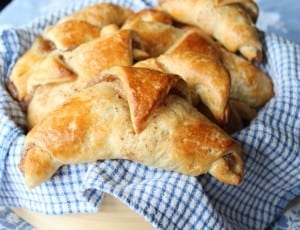