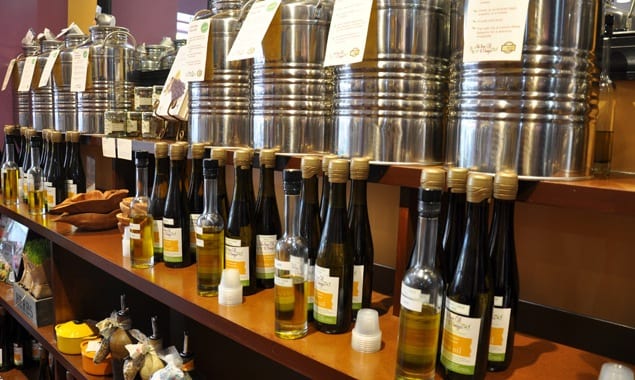 Olive oil has deep cultural significance as well as major health benefits, but the alleged fraud in the olive oil industry has belittled both. A new crop of local specialty shops has emerged to change that.
By Lauren Clason 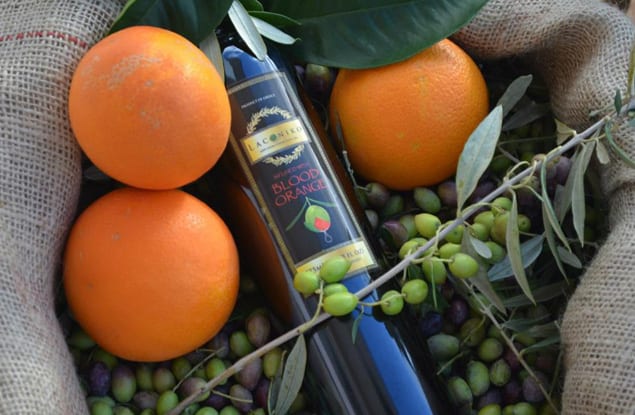 A long time ago, in ancient Greece, there was a city. The ruler of this city, King Cecrops, was well-respected among the gods and his people, but his city lacked a personal patron deity, one whom his people could turn to in times of trouble, who would devote personal attention to them and show them favor.One day, King Cecrops decided to correct this, and so appealed to the gods.

Both Athena, the goddess of wisdom, and Poseidon, the god of the sea, favored King Cecrops and his city, and quickly answered the king’s call. Their heated argument over who was better suited for the title nearly sent them into battle, but then Athena, in her infinite wisdom, decided a contest would be much more effective and far less bloody. Athena and Poseidon agreed to each present the city with a gift, and King Cecrops would be the judge.

Atop the city’s acropolis, with the king and the people standing by, Poseidon raised his mighty trident and struck the earth, sending a jet stream of water shooting into the air. The people were awed, and happily approached the newly-formed spring to drink. But, to their dismay, the water was salty and therefore useless.

Athena’s gift was much less spectacular, but much more important. Kneeling down, she planted an olive tree in the earth. A simple gesture, the olive tree provided the people with a number of things: food, wood, and what the olive is most famous for still today, oil. 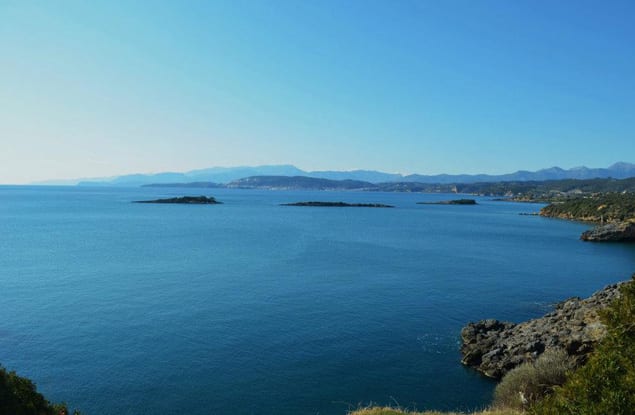 The olive was revered throughout ancient history, evident through constant mention in legends, fables and histories. Both the twin gods Artemis and Apollo, as well as Rome founders Romulus and Remus, were born under olive trees. Odysseus’ boat and axe were fashioned from the wood of the olive tree, as was the stick he put through Cyclops’ eye.

Olive oil was an everyday utility. Ancient Greeks used olive oil on their bodies after baths, and the frescoes in ancient Egyptian tombs depict vases of olive oil for the deceased to carry with him in the afterlife. The olive tree is also a symbol: of strength, of victory, of peace. In ancient Greece, olive branches were awarded to the victors in athletic competitions. After the Great Flood, God sent Noah an apology note: a dove clutching an olive branch in its beak.

Needless to say, Athena won that contest with Poseidon, and the city of Athens was christened.

Fast forward several thousand years to present-day Laconia, Greece, on the Gulf of Laconia, roughly 150 miles southwest of Athens. Diamantis Pierrakos works with his father and several other men in the sandy groves of his family’s olive tree farm, the warm ocean breeze stirring his hair. It’s in the upper 70s, and the salty smell of the ocean permeates the grove. Spring has arrived, and the koroneiki olive trees have started to blossom. The tiny fruit will develop throughout the summer, and Diamantis and his brother, Dino, along with their father and the rest of their family, will harvest it come November to bottle and sell under their Laconiko brand name. The farm has been in the family for four generations, and Diamantis, though his parents pushed him and Dino away from the farming industry, knows no other way to live.

“I feel a connection to our land and to our olive trees,” he said. “…Olive oil to the Greek people is our lifestyle. If we don’t have olive oil on the table, we don’t have dinner.” 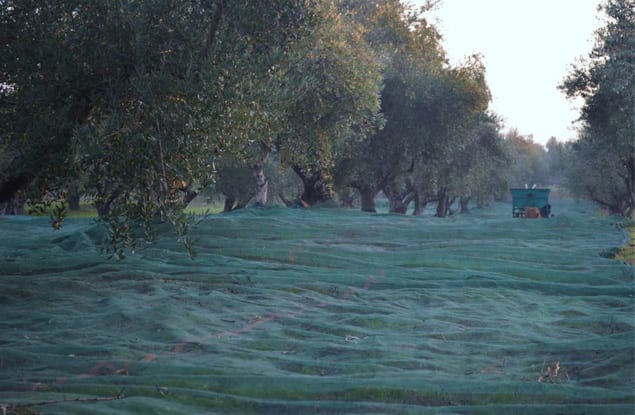 While not given the same reverence it enjoyed years ago, olive oil is still a staple in the Mediterranean, and it’s gaining ground in the United States. The California Olive Oil Council estimates a 1.1 million gallon increase in production this year over last year, and olive oil imports have steadily increased over the past couple decades. In 2013, the U.S. imported 298,000 tons of olive oil, up from 226,000 tons ten years ago. Similarly, the U.S. consumed 294,000 tons of olive oil last year, versus 216,000 ten years ago. Diamantis and Dino went to school for business and marketing in Virginia, and now split their time between farming in Greece and managing retail in the states. Their 50-acre grove started out at 250 acres originally, but the land was continually divided up between family members as the generations passed. Now his family owns around 5,000 Koroneiki olive, kalamata olive and citrus trees, which they tend and harvest themselves. The olive oil which they produce from the koroneiki trees they also process themselves at a local olive mill the same day they’re picked. There the olive is stripped of leaves and twigs, then filtered and squeezed to get the extra virgin olive oil they bottle and sell. 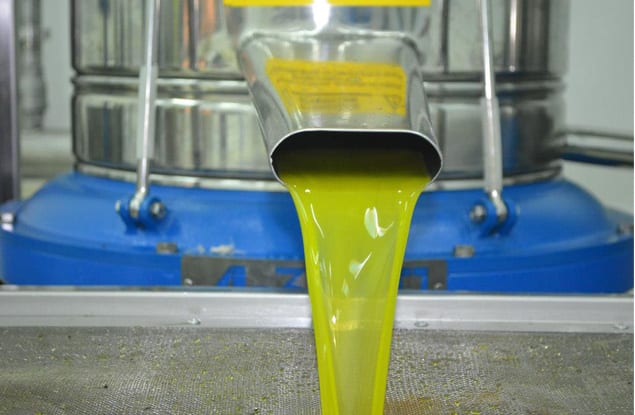 What, exactly, is “extra virgin” olive oil? It’s pure olive oil, free of contaminants and unadulterated by vegetable, canola or other types of oil. It also has to meet a set of technical standards set forth by the International Olive Council, a regulatory body founded in Spain in 1959. But olive oil fraud is a problem acknowledged by many in the food industry, and many of the olive oils in U.S. grocery stores fall far below industry standards. The problem is so bad, Diamantis said, that olive oil is the number one food fraud in the United States. (The second is honey, he said, but that is a story for another day.)

The U.S. Department of Agriculture has established guidelines for the production of olive oil, but compliance is completely voluntary, as is participation in their Quality Monitoring Program, which ensures standards are met through lab testing of products and unannounced visits to the company’s facilities. According to their website, only three companies participate in the food and vegetable branch of the Quality Monitoring Program, and only one of those is an olive oil producer: Pompeian, Inc, a Baltimore-based olive oil company.

The New York Times recently ran a graphic detailing the business of olive oil fraud, citing a study from the University of California, Davis, that determined as much as 69 percent of bottles labeled extra virgin olive oil did not stand up against an expert taste test.

The questions and accusations about the olive oil industry are hotly contested, however, so how do you know when the label speaks the truth? The best way is to find a local shop with a knowledgeable and passionate owner who makes a point of meeting the producers of the oil she puts her stamp of approval on.

Meet Cary Kelly, the owner of Ah Love Oil and Vinegar in Arlington, Virginia. An eloquent and personable gray-haired woman with striking blue-gray eyes, Cary opened her olive oil shop several years ago after deciding she needed a change from her business in nonprofit consulting. She has always been an avid cook, and her post-graduate trip to Europe in 1979 transformed her from the traditional American butter consumer to the Mediterranean olive oil consumer instead.

She returned to the states with a souvenir bag full of olive oil and passion, but it wasn’t until her friend took her into one of the first boutique oil and vinegar tasting shops four years ago in Pinehurst Village, North Carolina, that the light bulb went off.

“I thought, oh my gosh, a store full of olive oil and really good balsamic vinegar, and you get to taste it?” she said. “The experiential nature of that shopping really captivated me.” 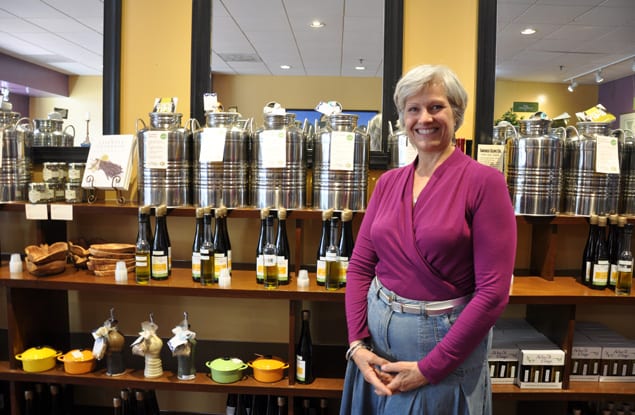 Ringing in Autumn with Italian Red Sauce and Red Wine

Oil and vinegar specialty shops have been springing up all across the United States the past several years, from Sedona, Arizona to the Jersey Shore, incorporating other items like spices, sea salts and skincare. Besides being small and locally-owned, consumers are drawn to stores like Cary’s for the personal attention, the expertise, and of course, the product.

“I’m a small business that buys from small businesses, and the advantage is that everything is fresh,” Cary said.  “Thora and Ed, who own the Teeny Tiny Spice Company, don’t have a warehouse big enough to hold two years’ worth of spices. They grind it right before they send it to me, and that’s true of most of our producers. They operate on a small scale, I operate on a small scale, so everything moves quickly enough that it is still really fresh for the consumer.”

That Pinehurst store is part of an exclusive single-supplier network out of California, Cary said, but she decided to go it alone, which allows her to control her own product and meet the individual olive farmers. “It’s important to me to meet the person who made it. I want to know the hands that were in the food.”

Those hands belong to Diamantis, who found her on the internet while beginning to market the Laconiko brand in the United States. His business ethos is identical to Cary’s (“We make it a point to meet every single one of the owners and to make sure they have the same passion we do.”), so the two clicked. Laconiko represents 95 percent of the infused oils in Cary’s shop, like blood orange, lemon, basil, rosemary. That’s because, Cary said, Laconiko uses their same standard oils for their infused options, whereas other producers often use a lesser quality.

Laconiko olive oil can now be found in nine states as well as DC, and the Pierrakos recently claimed a gold medal at the 2014 Los Angeles International Olive Oil Competition, as well as a silver medal at the 2014 New York International Olive Oil Competition. Cary’s Arlington store is actually her second; the first is in the Mosaic District of Fairfax, Virginia. 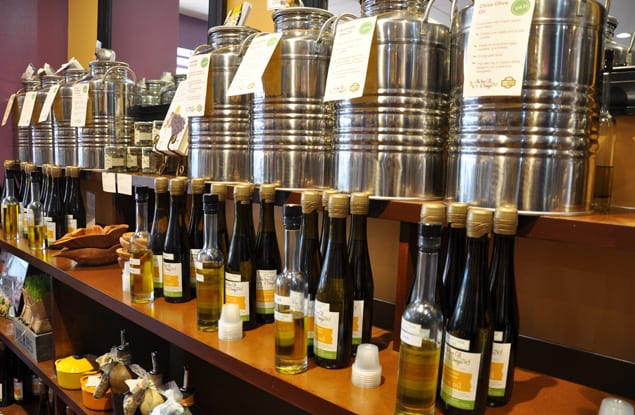 The artisanal food movement marks a shift in the consumer trend from buying from mass-producing conglomerates who load their foods full of preservatives to a more familiar and accessible producer or shopkeeper, whose products are made from natural ingredients and have a shorter shelf life. Local stores like Cary’s reestablish the people factor and also act as consultants, giving their customers advice and introducing them to new products they would likely skip over otherwise.

The specialty food industry grew by 22 percent in sales over the past two years, according to the Specialty Food Association in New York. While their businesses are growing thanks to the burgeoning market, Cary is quick to acknowledge that it sounds pretentious to many unfamiliar with the olive oil industry.

“Why does it matter? Why should we as a consumer care whether it’s extra virgin, which I think is a good question,” Cary said. “The answer to that is one, the taste is incomparable. Part of the definition of extra virgin is freshness. All of the characteristics I outlined deteriorate with time, because olive oil is essentially just fruit juice. It’s just squeezed out of the olive, that’s it. It has no preservatives or anything to extend its shelf life. And the health benefits are so amazing. It’s one of nature’s greatest miracles.”

Then, of course, there’s the history. The story of Athena may not be as powerful to present-day Americans as it was to ancient Greeks, but the background of the product, where it came from, how it was made, and who made it, is just as interesting.

“Our role is to inspire their culinary imagination,” she said. “Customers love the stories.”

Eating Your Way Through Loutraki, Greece