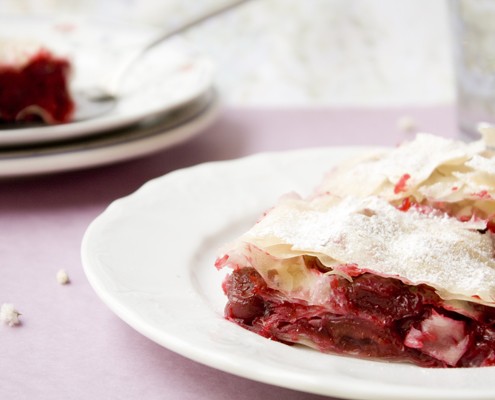 Here at Honest Cooking we’re all about honest and straightforward food, and Tamara Novacoviç’s strudel is a perfect example of just that.
Text And Photo By Tamara Novacoviç

Strudel is a type of layered phyllo pastry with sweet filling inside. It is a traditional pastry in the whole area formerly belonging to the Austro-Hungarian empire. In Croatia we like our strudel very much and make it often. In Croatian it is called strudla or savijaca. Don’t mistake this for walnut or poppy seed strudel (roll), which is made with a different type of yeast bread-like dough. There are two delicious components that constitute this traditional sweet treat and that I would like to write about: phyllo dough and the filling.

Although I’m giving you the recipe which uses store bought dough, I would like to mention that home made strudel dough is a labor of love, a paper-thin creation that provides an elegant, multilayered crispness. The art of making this dough goes a long way back into the history of traditional households. The dough needs to be very elastic and is worked vigorously, rested, and then rolled out and stretched by hand very thinly. Purists say it should be so thin that a newspaper can be read through it-I actually saw a woman making such thin dough once. First thing you need is an old country, reliable recipe and patience. In traditional households, women made this strudel all the time. Sometimes several women worked on the dough: the ladies placed white tablecloths on tables and dusted the cloths with flour. First, the dough was kneaded until the air pockets were real small (if they’re large, the dough will tear). A piece of dough was placed on top and the gentle stretching began. When the dough reached the end of the tables, they had to let it dry out a little or else the filling would poke holes in it. I watched this dough being made once and even tried making it, but gave up (yes, after only one attempt).  I honestly believe once you master it (a few trial and error experiences are inevitable), it is not such a difficult mission, but I somehow gave up and developed a habit of making this strudel with store bought dough. Such is the dough in this recipe. I once read that brushing hot, baked strudel with warm milk makes the store bought dough juicier, a bit softer and more homemade-like. Click this link if you’d like to see the real traditional way of making phyllo dough.

The second thing I would like to mention is the filling. Most common fillings are grated apples with cinnamon and raisins or cottage cheese with sour cream and raisins. However, sour cherries are also often used and they are my absolute favorite and number one. I make this strudel with both fresh and frozen ones. This was one of the first sweets I learned to make.  I got the recipe from my mom and have been using it ever since. It uses vanilla pudding powder for the filling, it absorbs cherry juice and gives it a beautiful flavor. Usually, bread crumbs are used, but we definitely like it better with vanilla pudding.

The art of strudel and a sour cherry version