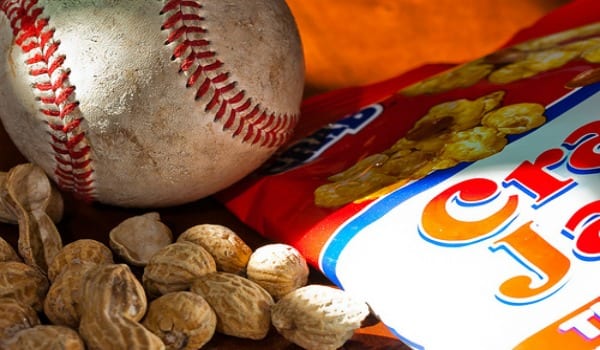 “Take me out to the ball game; take me out to the crowd. Buy me some peanuts and Cracker Jacks…” That famous seventh inning tune is the staple of ballpark snacks, and let’s not forget the hot dog. America’s pastime has always been the main event, but the food at the park comes in a very close second.
By Mallory Davis

While hot dogs, peanuts, and Cracker Jack are not the only culinary options at ball parks anymore, they are still the main edible attractions. Baseball stadiums across America now showcase some of the finest cuisine the country has to offer. From Garlic Fries at AT&T Park in San Francisco, Grilled Mahi Tacos in Miami, and Spaghetti Stuffed Meatballs in Milwaukee; ballpark foods have definitely added variety to their menus. But without the original game time snacks, these innovations would have never happened. Here’s how the tried and true favorites came to be. 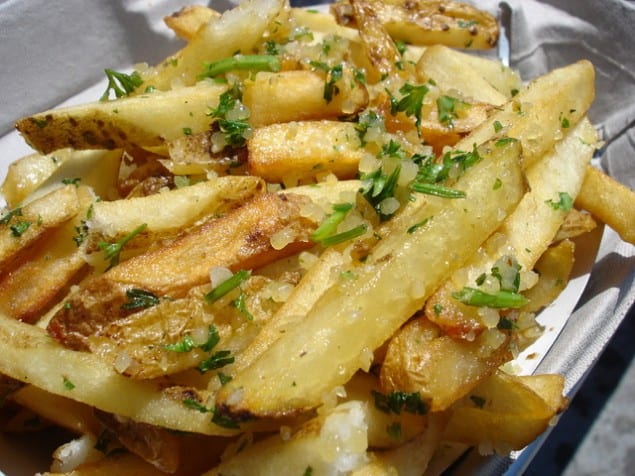 I recently went to a San Francisco Giants night game and boy, oh boy did I have a large selection of cuisines to choose from. There was something for everyone; gluten free, vegan, and other diets. But it all led back to the classic hot dog. As soon as I stepped into the park, walked around, and eventually sat down in my seat, all I could smell were fresh, savory hot dogs. That’s also all I smelled throughout the entire nine innings of the game (except for some garlic fries and the occasional churro).

“Hot Dogs, Get Your Hot Dogs, Here!”
Let’s be honest, no baseball game is complete without a vendor shouting, “Hot Dogs! Get your hot dogs here!“ There is a good reason for that because as it turns out the hot dog was invented specifically for the game of baseball. That’s one story at least; there are many variations as to the hot dogs invention. The sausage has been around as far back as 9th century B.C., but the ballpark hot dog as we know it today, has been around since approximately 1893. German immigrant, Chris von der Ahe, was the owner of the major league team, St. Louis Browns as well as other bars and an amusement park. He realized people liked that the dog was easy to eat, convenient, and inexpensive. This is the year the hot dog was officially introduced as traditional standard fare at ballparks across the United States. 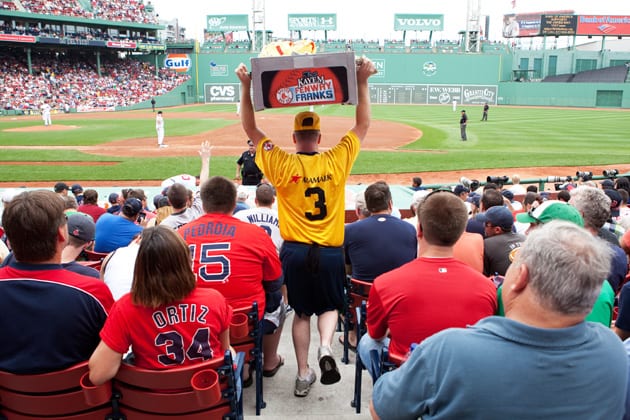 Another story that involves how hot dogs got their official name took place in 1901 at the New York Polo Grounds. This is where Tad Dorgan, a cartoonist for New York Journal, wrote “Hot dog!” in an article on baseball, in order to describe the vendor cries of “Get your dachshund sausages while they’re red hot!” Harry M. Stevens, an American sports concessionaire was the vendor of the “dachshund sausages” Tad Dorgan was describing in his article. Stevens said Dorgan didn’t know how to spell dachshund so that led to the easier phrase of “hot dog.” 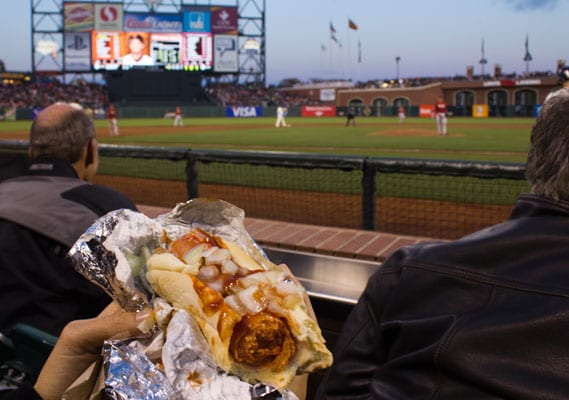 “Buy Me Some Peanuts…”
After the Giants game I attended and before the seagulls swooped down to grab all of the leftover snacks left behind by fans, were peanut shells. And they were everywhere, including inside the dugouts of both teams. Peanuts may not have been specifically developed for ballgames, like the hot dog, but they were chosen for a reason to become one of the most loved and traditional snacks of America’s past time. There is also only one story as to how this beloved snack came to be. Peanuts can be traced back to when the Spanish conquistadors were exploring the New World of South America. The peanut trend was adapted and then spread to Asia and Africa in the 1700s and finally made it to the United States in the 1800s. A few farms started growing the popular snack mainly for oil, animal feed stock, and food for the poor. During the Civil War, soldiers on both sides needed an easy and inexpensive snack to get them through the tough days. This is when it was recognized that the peanut was the perfect solution and from then on the peanut gained the respect it deserved. When the war ended the love for peanuts continued and demand increased quickly. This led to vendors selling fresh roasted peanuts on street corners and finally, at baseball games.
Today, the crack of a fresh peanut shell represents summertime and fond memories. Some say, if you find a peanut with only one nut instead of two, it’s actually good luck for your team on the field. 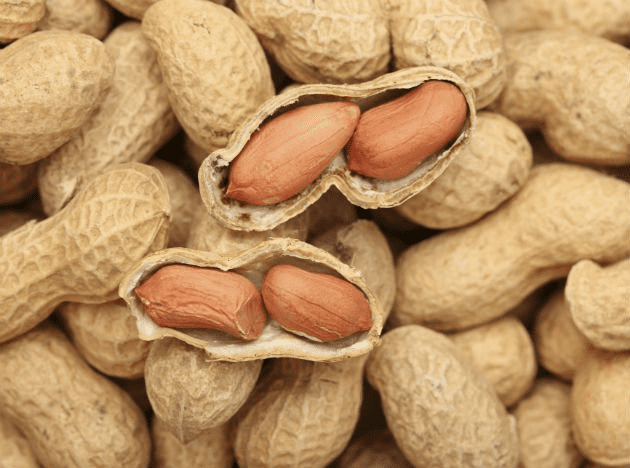 Perfect Peanuts
-Americans eat more than 600 million pounds of peanuts each year, according to the National Peanut Board.
–Baseball Hall of Fame’s, Jim “Catfish” Hunter and Gaylord Perry are peanut farmers from North Carolina (Hunter from Hertford and Perry from Williamston).
-The Guinness Book of World Records reports that on April 3, 1973, Chris Ambrose, Clerkenwell, London, ate 100 peanuts single handedly in 59.2 seconds!

“…And Cracker Jacks…”
Cracker Jacks may have a simple history unlike the flavors each bag delivers to those who consume them at baseball games. It all started in 1893 when brothers, Louis and Frederick Rueckheim became bored of plain, old popcorn and wanted to give it a new and exiting twist. They experimented and discovered molasses and peanuts were the perfect new ingredients. That same year, they introduced their new take on popcorn at the Chicago’s World Fair and the rest is history. The public agreed the brothers’ new recipe was quite a winner indeed. Another convenient, cheap, and delicious snack to eat at baseball games. A few years after the introduction, the brothers concocted a recipe to keep the new ingredients from sticking to one another and it is a secret recipe to this day! Although, sources tell me the successful secret ingredient is oil…
Later, in 1908, “Take Me Out To The Ball game” was introduced along with its famous lyric about the popular snack. The song gave free advertising to Cracker Jack and from then on, it because one of the three most traditional fare at ballparks. Today, all 30 major league parks offer the sweet snack. 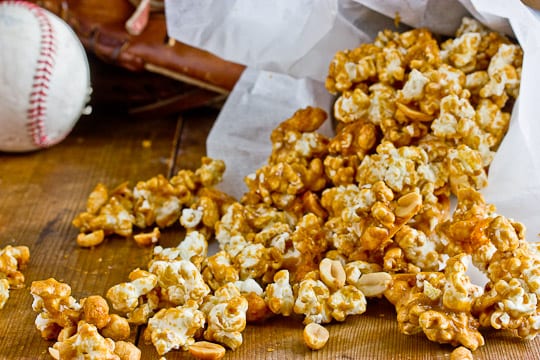 Sugary Sweets
-In 2009, Boston’s Fenway Park sold roughly 1,000 bags of Cracker Jack per game.
-The first Cracker Jack box with a “toy surprise” inside appeared in 1912. Since then, more than 23 billion trinkets, cards and other prizes have been given out.
-A satisfied taster pronounced the new and improved snack “crackerjack,” using a slang term of the era that roughly translates to “awesome.”

Back to the Basics
There may be Kansas City-style ribs at Citi Field, chorizo bratwurst at Miller Park, sushi at Safeco Field, and an eggplant parmigiana sandwich at Yankee Stadium; but they don’t put up even half of the stats that the old fashioned hot dogs, peanuts, and Cracker Jacks do. It is predicted Americans will eat 21 million hot dogs throughout the entire baseball season as well as consume 600 million pounds of peanuts. Those kind of statistics come with respect and a lot of time.
At the game I attended I chatted with other fans around me in our seating area. I began to talking to many of them about what they preferred to eat at a ballgame. It was not surprising that they all demanded hot dogs as their main course, washed down with a beer. Simple as that. And later in a game when snack cravings often come along, they mentioned the best food would be something crunchy, like a good ole’ bag of peanuts (or Garlic Fries!) Baseball games are about watching the game, socializing, and eating. What drives people to get up often during games is to grab another beer or check out what other food items the park offers. Personally, I dislike getting up during games because I don’t want to miss any action; but turns out, the one time I did get up during this specific game was to get another drink and a hot dog (without the bun!)

Mango and Pineapple Chutney with Chipotle Aioli on Hot Dogs