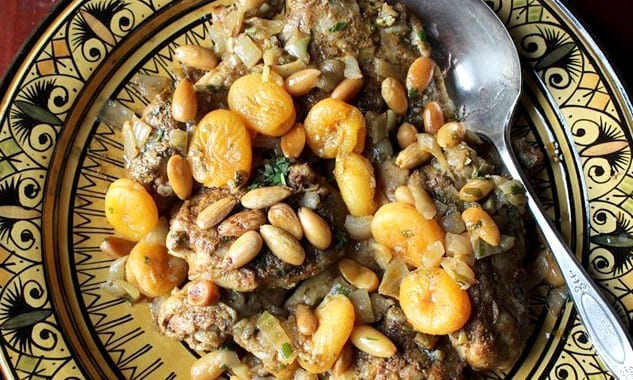 When I travel to another country, I often take a cooking class there because I find that an in depth exploration of a country’s food is one of the best ways to learn about its culture. Last spring in Morocco I took a class at La Maison Arabe in Marrakech. Classes at this esteemed school are taught by dadas, traditional Moroccan female chefs who themselves learned the centuries-old recipes from their mothers and grandmothers. 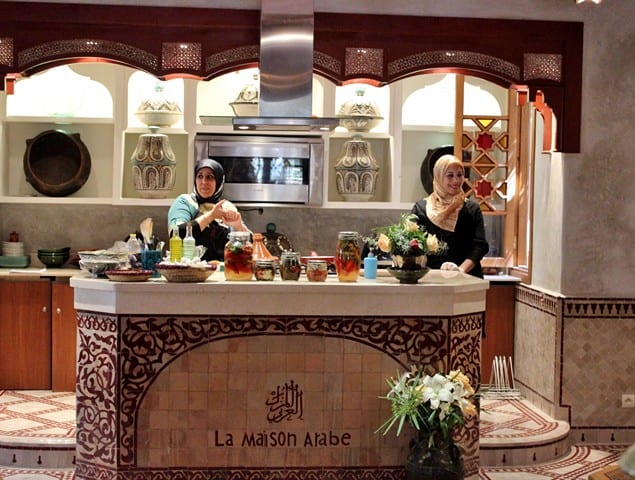 Aside from couscous, tagine is arguably Morocco’s most classic dish, and in this class I learned the secrets behind making one.  Originating with the Berbers, Morocco’s first inhabitants, tagine is a stew that’s slow-cooked in a uniquely shaped clay vessel, also called a tagine. The conical shape of the tagine promotes heat circulation and even braising of the stew’s ingredients. 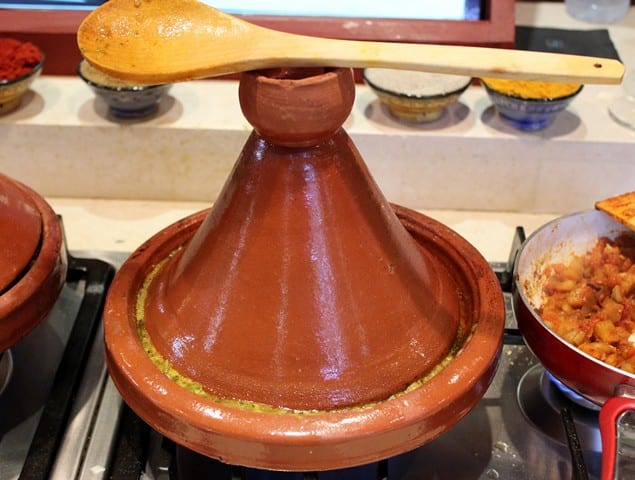 One of the main reasons for a tagine’s distinctive flavor is the combination of spices used in the marinade. Spices are a serious business in Morocco, and the country’s ubiquitous spice shops offer a thorough and colorful education to the curious traveler who ventures into one. 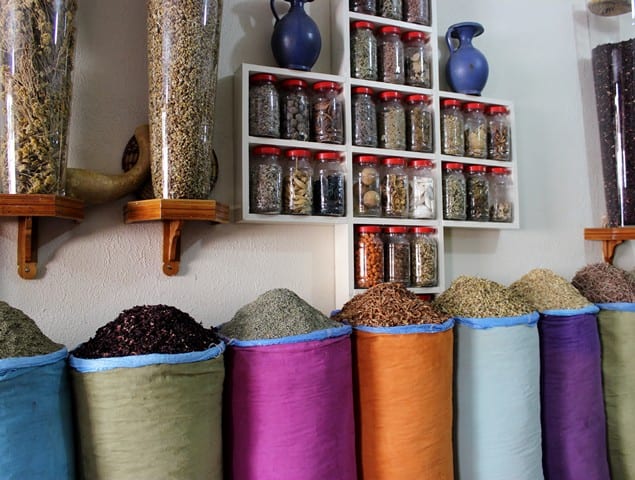 The spice blend known as Ras el Hanout (which translates to “head of the shop”) is a mix of up to 35 spices, herbs, and roots representing the best that a particular spice shop has to offer. Each mix is slightly different depending on the shop, but they can generally be divided into red which is spicy, or the more common brown which is sweet, meaning mild. Predominant spices in Ras el Hanout, and in much of Moroccan cuisine, include ginger, turmeric, sweet paprika, cinnamon, cardamom, and cumin. Moroccan cumin, more fragrant than any I’ve ever smelled before, is often the base note of Ras el Hanout and of many Moroccan dishes, imparting them with an incomparable warmth and depth. One of our instructors informed us that Ras el Hanout is sometimes called the “lazy wife spice” because a cook can simply rely on a few teaspoons of it instead of measuring out specific amounts of individual spices. Lazy or not, this is a handy detail to know. 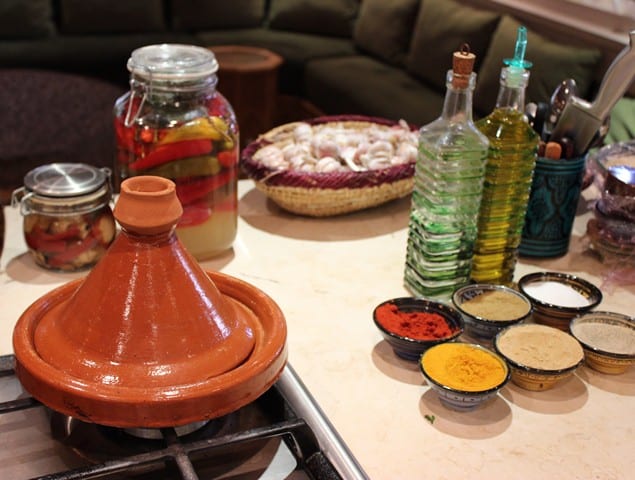 In addition to the complex use of spices, Moroccan cuisine is also known for its blending of sweet and savory elements in a dish. This combination is most evident in the addition of dried fruit such as figs, dates, prunes, or apricots to a meat dish. The result is a subtle sweetness that, combined with the warm spices, contrasts with the savory elements of garlic, onion, cilantro, and parsley to create a truly delectable eating experience. When a tagine includes dried fruit, the fruit is cooked separately, usually caramelized with honey or sugar, and then is added to the meat shortly before serving. This keeps the fruit’s shape intact and contributes to the beauty of the dish. 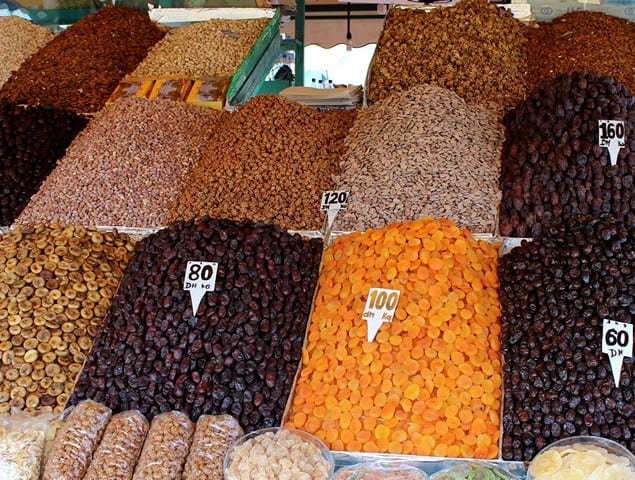 Another beauty of tagines is their simplicity. The Berbers created a practical dish that could slow cook over the coals and then be served communally in the same earthenware pot in which it was prepared. While the traditional way to cook a tagine is over charcoal, you can cook it on a grill or on the stove top, the method we used in the class. If you’re using a clay vessel and cooking it on a burner, you’ll need to use a heat diffuser and gradually bring the heat to the desired temperature. You can also cook a tagine in an oven heated to 350 degrees Fahrenheit, using a Dutch oven or casserole dish sealed with aluminum foil. 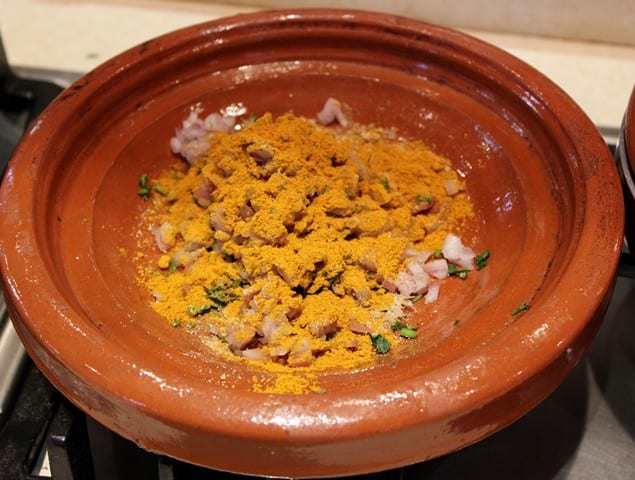 At Moroccan restaurants in the United States and Europe, it’s not uncommon for tagines to be served with couscous; in Morocco, however, this is not the norm. Couscous is a separate dish prepared in its own unique way along with meat and vegetables in a special steamer called a couscoussier. Tagines are instead accompanied by crusty bread perfect for soaking up the aromatic sauce. 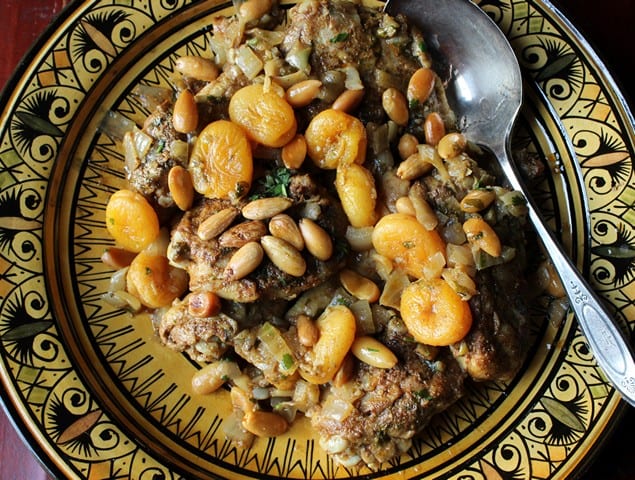 And that is exactly what we did at the end of our class at La Maison Arabe. After preparing our tagine, we all moved to the garden. Surrounded by herbs and olive trees and sipping some lovely Moroccan wine,  we savored our meal–and our visit to this beautiful country. 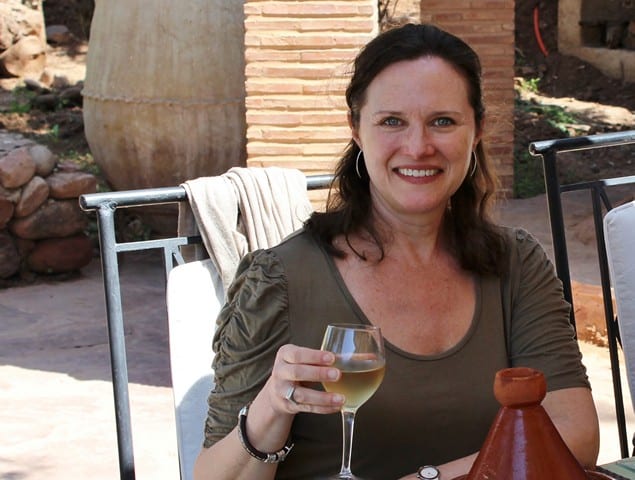 Chicken Tagine with Apricots and Almonds