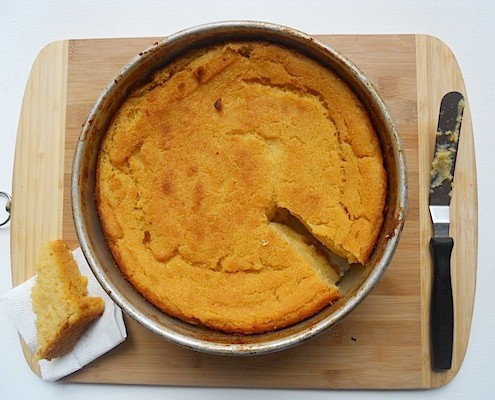 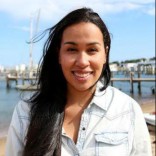 Marnely Rodriguez-Murray is the author of the food blog Cooking…

Better known as The Best Cornbread You’ll Ever Have, Arepa is a staple in the Dominican Republic.
By Marnely Rodriguez

Better known as The Best Cornbread You’ll Ever Have, Arepa is a staple in the Dominican Republic.We’ll call it “cornbread” for lack of a better word, since Arepa’s texture is difficult to explain: bread pudding-like cornmeal cake or even congeled sweet corn pudding, you’ll need to make this to really experience a true Arepa. Not to be confused with Mexican and South American arepas, which are flat, savory discs that are usually filled with meats, cheeses or eggs. Dominican Arepa is a sweet dessert that will perfectly accompany that cafecito.

Naturally gluten-free, Dominican Arepa can also be made with coconut milk. This was usually done in the town of San Pedro de Macoris, where coconut is a staple to this day. The northern Cibao region is known for its “smoked” Arepa, cooked over a wood-fire and naturally smoked. This addition creates for depth of flavor, contrasting with the sweetness of the corn.

The old folklore saying, “Como la Arepa, fuego por arriba y fuego por abajo”, meaning “Like the Arepa, fire on top and fire on the bottom”, tells of the way Arepa was made (and still is!) in the rural towns of the island. Traditionally, it is prepared in a cast iron pot with lid set in hot coals and covered on top with even more coals. This allowed for even distribution of heat. Nowadays, we have ovens that take care of that so the recipe below is baked in an oven, although you can try the traditional method if you have coals and a wood-fire at your disposal. 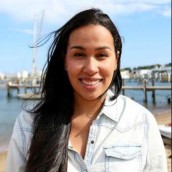 Marnely Rodriguez-Murray is the author of the food blog Cooking with Books. A graduate of The Culinary Institute of America, she has worked as an Overnight Bread Baker in Colorado, a Chocolate Maker in Virginia as well as a Pastry Cook on the whimsical island of Martha’s Vineyard, just to name a few. She currently resides on Martha's Vineyard with her chef-husband, where they are both on an endless search for Caribbean flavors, new culinary trends and gastronomic inspiration.