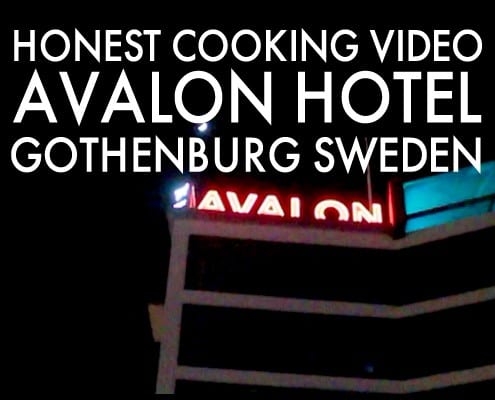 Dining Down Under: Rosewater, Cardamon and Pistachio Lassi

The Avalon Hotel in Gothenburg is the city’s first member of the Design Hotels network. Kalle Bergman decided to check out both their design and their food.
By Kalle Bergman

The Avalon Hotel is almost ideally situated in the center of Gothenburg. Opened in 2007, it was Gothenburgs first member of the Design Hotels Group. The general design can perhaps best be described as eclectic. A combination of art deco, 60’s design classics, contemporary items and fun art pieces. It’s colorful, happy and a rather nice exception from the normally strict Scandinavian hotel design tradition. Honest Cooking stayed in a superior room, and the room itself was a delightful surprise. The feature of moving most of the bathroom out into the bedroom is fun and daring, but perhaps best suited for guest who know each other well. It becomes pretty intimate. The jacuzzi bathtub is a perfect way to unwind after a day of sightseeing or shopping, and I think its great that you can watch tv or just look out over the city while you relax with a glass of wine in the tub. Other positives on the room were in the small details, like hangers in the right place, electrical outlet next to the mirror and good wardrobes. Those are some of the clever little things that make a hotel stay more comfortable, but they are often missed – especially on so called cool design hotels where function often takes the back seat. Thank you Avalon Hotel for not letting that happen.

The coolest feature at the Avalon is of course the rooftop swimmingpool that hangs onto the top of the hotel for dear life. During our visit, the weather wasn’t exactly perfect for sunbathing, but we can imagine it being absolutely stunning on a warm summer day.

So what about the food? Well, the Avalon Restaurant on the entrance level triples as hotel bar, breakfast room and gourmet restaurant. And where the breakfast is good, the restaurant is actually rather splendid. The cooking is competent and with a fun streak to it. The food is clearly New Swedish, but with solid techniques and not too much of experimenting going on. New Zealand Chef Jason Alderton seems to have decoded the secrets of Swedish cuisine, without becoming a slave to it. His presentations are beautiful, and considering the price level, the Avalon Restaurant has to be one of the best deals in town. The flavors are big, bold and matched beautifully by the wines offered by Daniel XX the competent Sommelier. The wine list is heavy on classic French names, but it is slowly being updated with some fun New World alternatives.

The only minor downside is that the 4 and 5 course menus are a little too big in our opinion – but there’s of course the possibility of not always finishing every single plate. Something yours truly have a problem with.

In the end, Avalon Hotel stands out as one of the most interesting hotels on the Swedish west coast, and the restaurant surprised us with some seriously competent cooking and instinctive understanding of flavors. We’ll definitely be back for seconds.