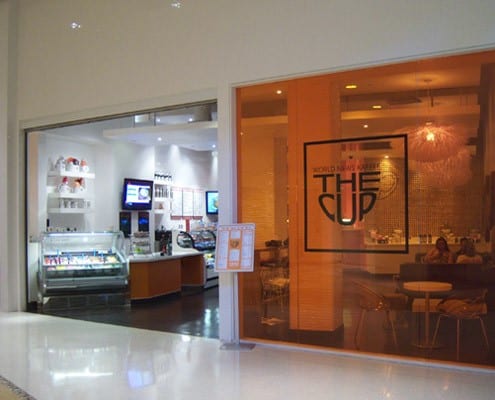 Bill Walsh falls upon a fair oasis of coffee on the Strip.
By Bill Walsh

My final coffee stop in Sin City was a place that was also located in the Crystals, a shop located very discreetly in the back first floor called the Cup. Rumored to me by one source to have decent espresso, it took me a walk or two around the Crystals to actually find it but only around the corner and down the stairs from my earlier coffee stop.

A cute-looking venue with a huge orange window and tons of white, the place has a nice array of art and furniture, perfect for the tourist looking for a break from the crowds. Asking the barista of the coffee, they informed me it was “their own” (which in trying to clarify, I wasn’t able to decipher whether it was a “secret supplier” situation or they roast their own, though my guess is the former). I ordered a doubleshot off their Victoria Arduino machine of their espresso blend and a their signature blend a la regular drip.

The espresso, pulled short/medium and with a flat brown crema, was a tad burnt in the front, with notes of dark cocoa, deep sassafras and lapsang souchong; an overall decent pair of shots though the extraction could have been better. The drip proved good as well, with a smooth, light body and notes of honey, hyacinth, multigrain, wheat grass and brazil nut as well as a tinge of slight staleness. The tea is Stash.

While I wasn’t as floored as I had hoped to be, the Cup still provided a fair coffee and espresso, especially compared to the many other coffee stands doling out over-roasted swill nearby. Thus, if you’re in the Crystals looking for a cafe that has a nice environment and decent coffee, try the Cup.