This dish references the sweet and cinnamon notes of your typical kugel, but adds leeks and swiss chard for a savory spin that is appropriate at any meal.
By Carly DeFilippo 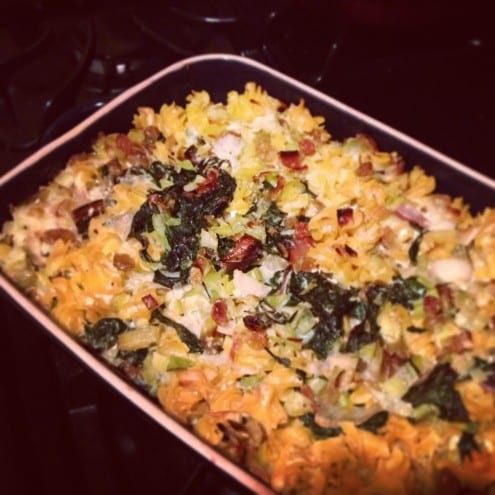 The first time I ate leeks was in Paris, and I instantly fell in love with this elegant green legume. The first few times I cooked with leeks, I used the whole vegetable (and it tasted fine to me!), but as time went on I learned to search for the long, slender white stems that make for the best leeks (and started discarding the rougher dark green tops).

My favorite way to eat leeks is still in a savory tart. I tenderize mounds of the chopped veg in a little butter, and pile so many leeks atop the crust that there’s barely room to add the egg and dairy binding agents. But for this, I wanted to think outside the box. So my humble offering is a spin on another of my favorite foods: noodle kugel. This mildly sweet noodle dish plays on the flavors and textures of your typical kugel, but adds a savory element that renders it suitable for almost any meal.

Print
Prep Time
15 mins
Cook Time
35 mins
Total Time
50 mins
This dish references the sweet and cinnamon notes of your typical kugel, but adds leeks and swiss chard for a savory spin that is appropriate at any meal.
Author: Carly DeFilippo
Recipe Type: Entree, Side
Serves: 6-8
Ingredients
Instructions
Notes
For a gluten-free recipe, use spiral quinoa pasta (as I did) instead of egg noodles.
2.2.6