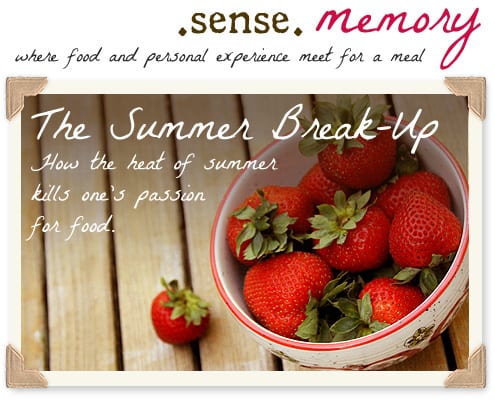 Denise Sakaki talks about the heat of summer and how it wreaks havoc on her appetite.
By Denise Sakaki

Things I hate: The milk carton that’s put back into the fridge with less than a coffee’s worth of a splash. Seriously. Stop, already. Telemarketers! Grr. Hunting for a parking space you know you’ll never get during the Christmas rush at the mall. Press-on nails. Seriously, they just look so fake, so really, why bother? Rain on your wedding day, and a free ride after you’ve already paid. No, that was an Alanis Morissette song lyric. And it wasn’t something she hated, merely an ironic observation.  But more than anything in this very moment, I truly hate the sweltering heat of summer and what it does to one’s appetite, given the need to write a column about the emotional pleasure of food and why it’s so wonderful. Because right now? Food is awful.

As you know, I live in the Pacific Northwest, the land of evergreen-everything, the place where you learn to smile and fake-laugh when you hear a joke about the constant rainfall for the one billionteenth time. It’s a region populated with sun-starved, but affable mole-like inhabitants that are frankly, unfit for the days where the blazing orb in the sky wants to burn us to a crisp. But every summer, the stalwart Seattleites slather on the SPF 1000+, put on their Big Girl Pants (or shorteralls) and accept the seasonal Devil’s Bargain that for a land bereft of central air conditioning, we will have frolicsome long afternoons in parks or on lakes, and endure at least a couple of weeks out of the year where you literally want to take your skin off, sit in your bones, and eat ice for every meal. But hey, it’s summer! And we love it anyways, like a bad boyfriend.

Not that summertime eating isn’t glorious – we’ve been enjoying outdoor grilling, hanging out on our patio, friends’ patios and total strangers’ patios because the summer season is conducive to communal dining the way no other season can manage. The sun makes people happy. We get invited to backyard barbecues to share food with people we barely know. You don’t invite random crowds over for a crown roast of lamb. Well, some people might, but I’m keeping them lamb chops all to myself. It’s effortless to just throw out a casual invitation to a group of friends and acquaintances that you’re firing up the grill Sunday afternoon with brewskis and bratwurst, and suddenly a party unfolds like some epicurean flower, watered with session beer. That’s the best part of summer dining, one that nourishes the communal spirit as well as the hungry belly in desperate need of a food baby.

But not right now. Not today. I am in full breakup mode with food, as I write this piece sitting outside, with an extension-corded fan blowing air so that the laptop won’t overheat and die. My appetite, even the mere thought of eating, has shriveled up like some mournful, dusty raisin that fell into the back corner of your kitchen pantry two years ago. Even the most tantalizing of crosshatch-seared, juicy burgers can’t convince me to nosh happily, much less stand over a hot grill, sweating like participants in a butter eating contest. At least, that’s how I felt when I was standing over a grill the day before on this multi-day heatwave. I stupidly volunteered to be on grill duty, cooking up some hotdogs. My face and entire frontal half bathed in sweat, my only wish was that when I passed out from the grill’s heat, I would fall backwards instead of forwards, so as to avoid searing my face and disturbing the toasty wieners. The resulting hot dogs were lovely, but grill-induced heat exhaustion pretty much sapped any desire to feast heartily, instead leaving me a tragic heap of a wilted belle-a la-Southernesse, knocking back way too many juleps on an empty stomach.

I’m not the only one crazy from the heat – I see other people sharing their hot day foods and curious cravings on sweltering days. One friend goes full-gangstah by saying he craves spicy hot pot on days like this – if you can’t beat the heat, fully embrace your sweaty self to the point where your pores open up and you become a human wiffle ball. I went out to dinner on one of the hot nights (Hey, let’s make someone else slave over a hot stove!), and even with a restaurant menu of endless possibilities, I simply said: give me anything that’s cold. A plate of deviled eggs topped with smoked salmon, a raw tuna crudo, and some marinated fresh mozzarella with greens was a grand summer feast that actually excited my appetite, and I highly recommend items such as these for keeping your relationship with food during hot summer days happy and divorce-free.

Today my appetite is utterly stymied, and it’s a sad state of affairs when you’re no longer excited, maybe even slightly repulsed by the notion of eating food. Bring out the gun, Old Yeller’s time is done. But a love of food is just that, a love story. It’s a complex relationship possessing its daily ups and downs, and one that so often leaves me in the melodramatic crosshairs of whether or not I should have eaten that whole apple fritter or not. Ahh… sweet, sweet regret. I did a lingering stare into the cool depths of the refrigerator – mostly to drink in that marvelous cold air – and my gaze fell upon a bowl of glorious, jewel-red strawberries. I suddenly felt the twinge of familiar longing for that first refreshing bite into a sun-ripened, fridge-cooled berry. Eaten outside, even on one of the hottest days of summer, a bowl of strawberries just might be the thing to reignite the spark between myself and food. Me and food, in the hot summer sun – let’s hope these two crazy kids can make it work.