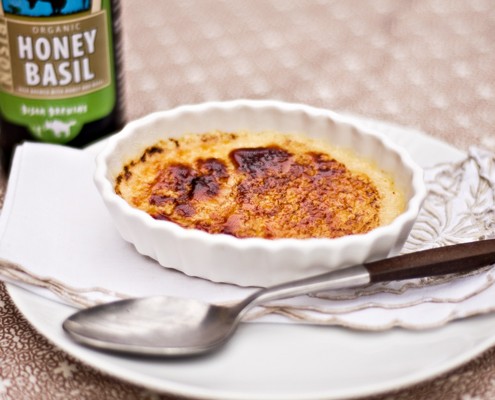 As a nod to the German October Fest, here’s a fun beer take on the classic dessert.
By Jackie Dodd

Oktoberfest kicked off this past Saturday, in Munich Germany. For over 200 years, this festival has dedicated over two weeks each year to celebrate German culture, locally brewed German beer and the pride that comes with it.

This year Oktoberfest will run from September 17th until October 3rd and feature, as always, only beer brewed within the Munich city limits. What is seen today as a Beer Holiday began in 1810 as a parade to commemorate the royal wedding of Prince Ludwig and Therese of Saxe-Hildburghausen, has become a well attended annual event that is replicated all over the globe.

For more information about this years festivities, you can visit: http://www.oktoberfest.de/en

As a nod to this annual celebration of local beer, this recipe for Beer Crème Brulee was created using a German style beer brewed in the USA.

Print
Prep Time
25 mins
Cook Time
70 mins
Total Time
1 hour 35 mins
As a nod to the German October Fest, here's a lovely beer take on the classic dessert.
Author: Jackie Dodd
Recipe Type: Dessert
Ingredients
Instructions
Notes
Cooking tip: Don’t brulee the sugar until you are ready to serve. After about an hour of sitting, the sugar will start to liquefy again.
2.1.7