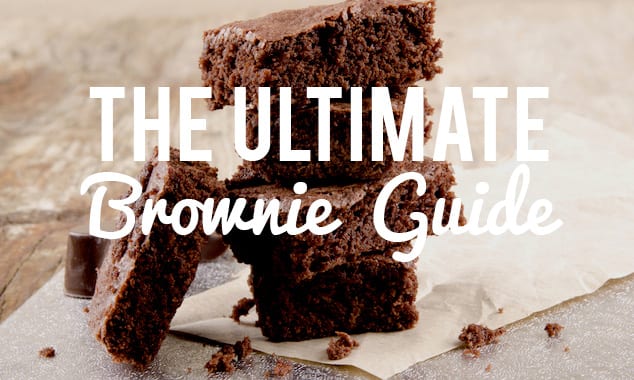 The Ultimate Dinner Party with BoConcept

Brownies come in many forms but they deservedly require their own category in the world of desserts. They aren’t quite cakes, cookies, or fudge. Yet much like their dessert counterparts, brownies are often described as being cakey, chewy, or fudgy. So what makes for the perfect brownie? Well, it’s all a matter of personal preference. Although with thousands of brownie recipes to choose from (the earliest published recipes date back to the early 1900s!), it can be hard to find your exact version of the perfect brownie.

In search of my perfect combination, I went on a quest to discover which brownie ingredients and techniques produce which results. In a crazy whirlwind of brownie baking, I made seven batches of brownies in a scientifically-inspired kitchen experiment.

I used an adapted version of the well-known Baker’s One Bowl Brownie recipe as my control and tested the effects of cake flour, cocoa powder, brown sugar, oil and cocoa powder, an extra egg yolk, and whipped eggs and sugar. I used the same ingredients, utensils, and bakeware, when applicable, and maintained a 350°F oven and a 20 minute baking time for each batch to ensure accurate testing. Take a look at the results, I hope they help you discover the tricks to making your version of the perfect brownie! 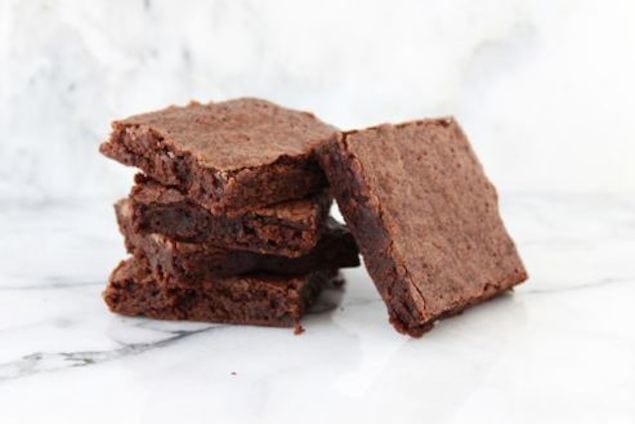 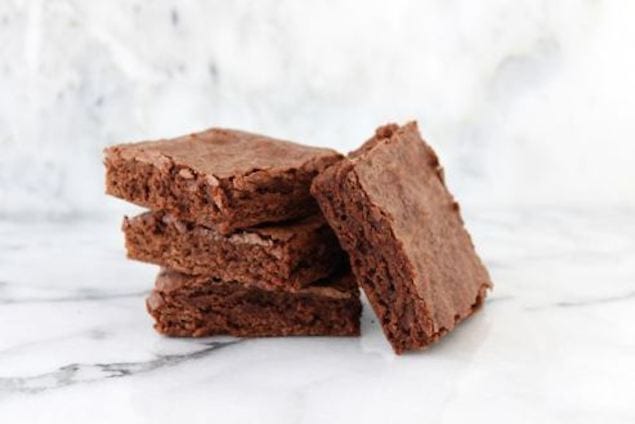 For this test I substituted the 1/2 cup (2.25 ounces) of all-purpose flour called for in the recipe with 1/2 cup of sifted Swans Down brand cake flour, which weighs 1.75 ounces after sifting. Everything else in the recipe was left as is. The brownies were lighter and softer, as you might expect. They were also less rich and dense.

If you’re wondering what cake flour is, it is a very fine-textured flour with a low protein content, usually about 8 percent. All-purpose flour has a protein content of around 10-12 percent, depending on the brand. The lower protein content in cake flour usually gives baked goods very tender and fine textured results, which is why it’s perfect in cake recipes. 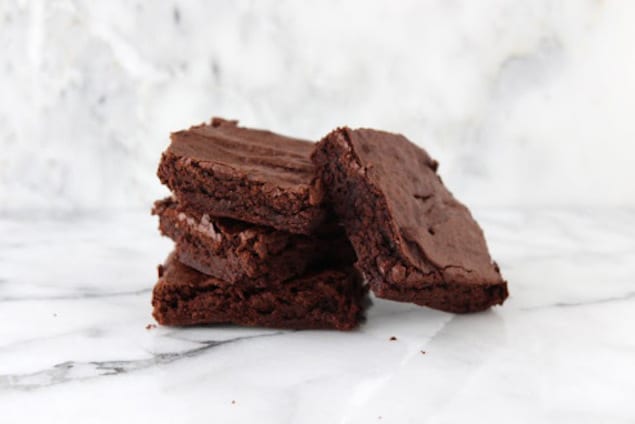 I removed the 2 ounces of melted chocolate in the recipe and replaced it with 3/4 cup of natural unsweetened cocoa powder, keeping everything else the same. The resulting brownies were nice and chewy with that distinct cocoa flavor, but they were also much more dry and crumbly.

The melted chocolate certainly provides moisture and without it, the brownies were parched. My go-to cocoa brownie recipe uses a whopping ten tablespoons of butter, as opposed to the control recipe’s six tablespoons. Cocoa brownies are quick, easy, and chewy, but they require more butter to maintain a moist, fudgy bite. 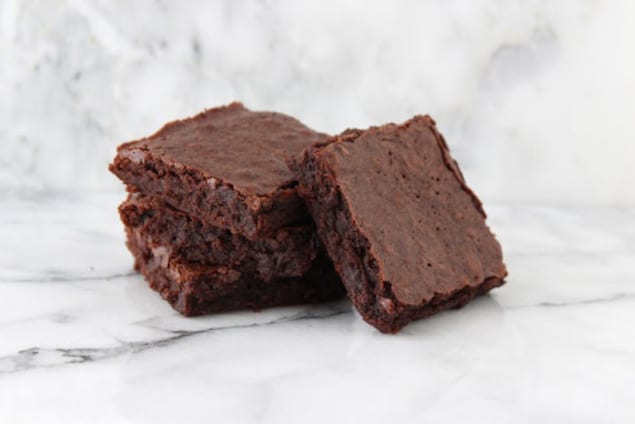 They were also slightly thicker and darker in color than the control recipe. The one thing they were lacking as compared to the control brownies (and later the whipped egg and sugar brownies) was that crinkly, tissue-thin crust that is so characteristic of brownies. The brown sugar adds too much moisture to allow the tops the dry out enough to produce that crust. 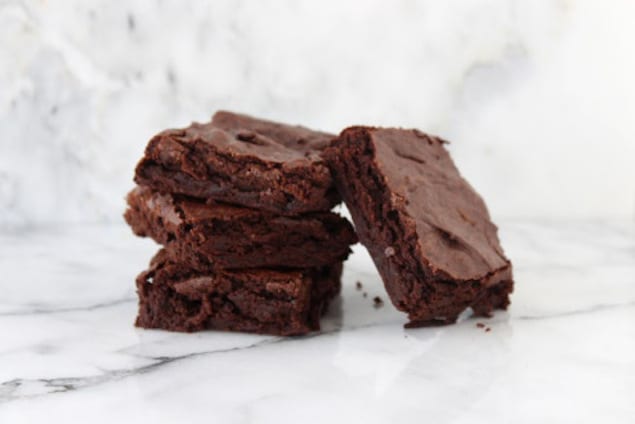 The idea behind this particular brownie test was to recreate the elements behind boxed mix brownies. Many of us grew up eating brownies made from a box and there’s definitely something appealing about their chewy texture and cocoa flavor. In an attempt to replicate those boxed brownie characteristics, I replaced the 6 tablespoons of butter with a 1/3 cup of vegetable oil and replaced the 2 ounces of unsweetened chocolate with 3/4 cup natural unsweetened cocoa powder.

The results were very similar to box mix brownies in flavor, texture, and appearance. They were soft yet chewy with a light cocoa flavor that lacked the chocolate intensity of a more rich or fudgy brownie. They were also lacking moisture and were almost crumbly. My assessment of making brownies using both cocoa and oil is that they definitely require more moisture either by adding fat, such as a touch more oil or an extra egg yolk, or water. 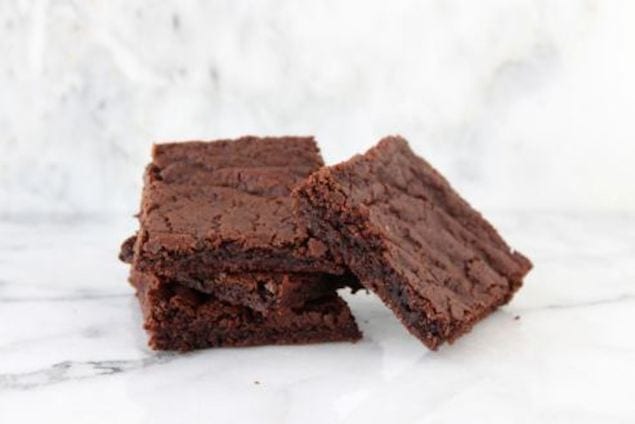 In the notes for the Baker’s One Bowl Brownie recipe it directs bakers to use an additional egg to make for more fudgy brownies. Knowing that fatty egg yolks add richness while the lean egg whites tend to produce a more cake-like texture in baking, I wanted to see just how fudgy an extra egg yolk would make these brownies. In addition to the two large eggs called for in the recipe, I added an additional egg yolk, keeping everything else the same.

The egg yolk brownies were supremely dense, moist, dark, and ultra chewy. Like the brown sugar brownies, these egg yolk brownies had way too much moisture to produce that crinkly, tissue-thin crust. They were also on the thin side. If you want to add richness to your brownies and make them more fudgy and chewy, adding an extra egg yolk is a great call. 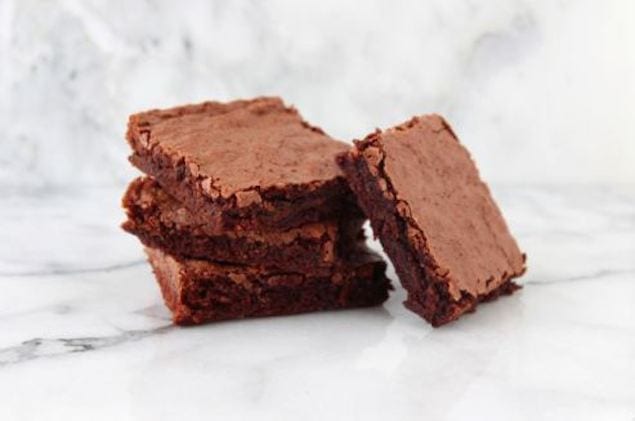 Finally, for my last round of brownie testing, I decided to experiment with the more unique technique of beating the eggs and sugar for 3 to 5 minutes with an electric mixer until they were pale, thick, and fluffy. After insuring the sugar was well dissolved into the eggs, I added the cooled melted butter and chocolate mixture and vanilla then proceeded with folding in the salt and flour.

The results were interesting. These brownies were rich, fudgy, and chewy, but had a lightness about them that none of the other brownies had. Plus they had a beautiful crinkly tissue-thin crust on the top that I loved. I must admit that while I enjoyed certain characteristics of all the other brownies in this kitchen experiment, these whipped egg and sugar brownies were my favorite. 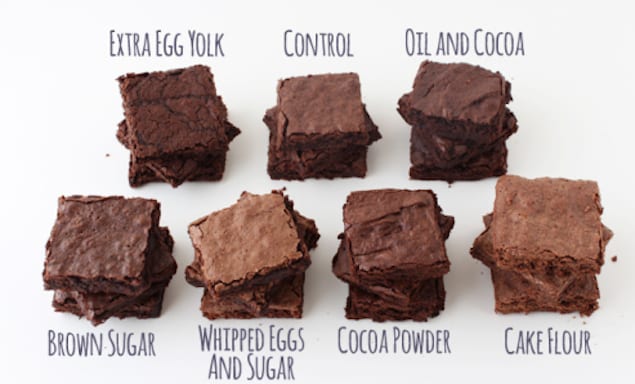