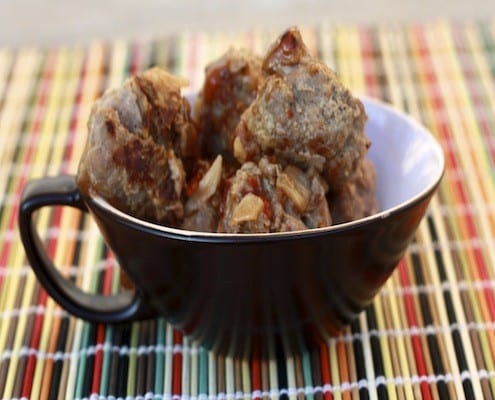 When I was first getting acquainted with this whole cooking thing a few years ago, I stuck to the basics. If I didn’t recognize a name in the ingredient list, I immediately passed over the recipe. If there was any way to simplify the recipe, I took advantage of it. My horizons have significantly broadened since then, so much so that I now get excited about cooking with new ingredients or trying a challenging recipe.

Chipotle chiles in adobo sauce are one of those previously ignored ingredients that I now use frequently. My first time purchasing them, I was confused…they came in a medium-sized can but my recipe only called for one. Huh?! After throwing away a can or two of them, I finally decided to start freezing the leftovers. I highly recommend this solution–just stick your extras in a small tupperware or freezer-safe container. When a recipe calls for them, I either thaw the container and pull out what I need, or I chop off a frozen chunk and let them thaw before using (alternately, you could freeze smaller amounts in an ice cube tray).

The chiles were the highlight of this meatball recipe. They were the perfect spicy complement to the honey in the sauce. Made with ground turkey, I was worried these meatballs would be dry and flavorless. They were neither, thanks to the seasoning in them and the sauce. If you prefer lots of sauce, I’d double the recipe for a heavier coating.

Print
Prep Time
20 mins
Cook Time
20 mins
Total Time
40 mins
Lean Turkey Meatballs tossed in a Honey Chipotle Sauce
Author: Natalie McLaury
Recipe Type: appetizer, main dish
Ingredients
Instructions
Notes
From Everyday Food Jan/Feb 2012
2.1.7
We ate these with sauteed spinach and a rice dish that I’ll soon share, but you could also top a salad with them or eat them on slider buns. They’d also be a fun party food–just stick a toothpick in them!

The Miami Taste of Brickell Food and Wine Festival