This baked pancake recipe is perfect for when you want something sweet for breakfast but don’t want to have to keep an eye on a stovetop flapjacks.
By Taylor Kadlec 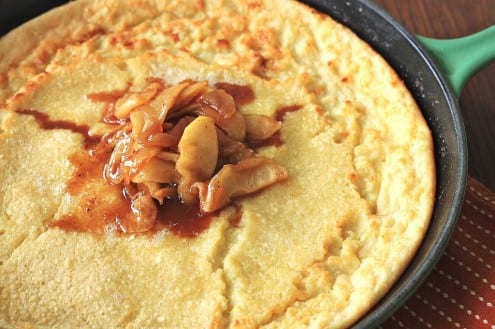 Like many countries, the food and eating habits of the Finnish have changed greatly in the past hundred years but staple foods remain to be dairy products, potatoes, and bread, supplemented by root vegetables, peas, beans, smoked meat and fish. However, the use of these main staples varies greatly between the eastern and western parts of the country, as the western side of Finland tends to eat much more meat and fish while eastern Finland cuisine is based more on vegetables.

Regardless of what part of Finland one lives in, some traditional Finnish foods are porridge with berries, rye bread, meat stews made with beef, pork, or reindeer, fish pie or soup, pulla, which is a sweet bread, and an interesting popular dessert called Leipajuusto, which is a cheese that is fried and served with cloudberry jam. One of the most interesting facts that I learned is that Finland has the highest per capita consumption of coffee in the world. Sounds like my kind of place!

To complete my research and immersion into Finnish cuisine, I decided to make a Finnish pancake, or Pannukakku as it is authentically named. A Finnish pancake is oven-baked in a skillet (or baking dish if you don’t have an oven-proof skillet) and is the perfect Sunday morning breakfast when you don’t want to stand over the stove flipping pancakes. The process is as simple as melting butter in the skillet, whipping up the batter, and then tossing the skillet in the oven.

The batter for pannukakku is thin, but once it gets 30-40 minutes in the oven it bakes up beautifully into a cross between a custard and a pancake. Marc and I both loved Finland’s version of pancakes. I loved how custard-like the pancake was and the caramelized apples were a wonderful topping. Other topping options could be powdered sugar, berries, maple syrup, jam, or whipped cream.

Print
Prep Time
15 mins
Cook Time
40 mins
Total Time
55 mins
This baked pancake recipe is perfect for when you want something sweet for breakfast but don't want to have to keep an eye on a stovetop flapjacks.
Author: Taylor Kadlec
Recipe Type: Breakfast
Serves: 4-6
Ingredients
for the finnish pancake:
for the apples:
Instructions
To make the pancake:
To make the caramelized apples:
3.2.1230
Previous Article