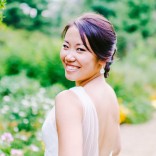 I am an attorney, a lover of reality television (esp…

Heat Up the Holidays with Korean-Inspired Fare

Eggplant slices are dipped in egg and Parmesan then pan fried. Stack the eggplant with spoonfuls of sauce and mozzarella and broil until it is hot.

I can still remember the first time my mom made me eat eggplant. It was cooked Chinese-style – cut into slices, sautéed until soft with ginger, a ton of garlic and soy sauce. It looked…super gross. Mushy, gray-ish-purple chunks in goopy looking sauce? Seven year old Tina was not on board with that. Of course, seven year old Tina didn’t have a whole lot of say in the matter, because my mom wouldn’t let me leave the table until I had cleared everything in my bowl. As I recall, she cleared the table around me, sat down with a pile of work, and patiently waited me out. This type of duress-induced eggplant eating definitely did nothing to endear me to the vegetable.

It wasn’t until high school, when I went back to China for the first time that I finally acquired a taste for eggplant. Honestly, I only ate it at first because it was the only dish that didn’t have a billion peppers in it. But then I realized that eggplant was actually super delicious, especially with garlic and ginger and that previously gag-inducing goopy sauce. It was a revelation!

Now that I love to eat eggplant, eggplant parm is one of my favorite foods.

For my recipe twist, I decided to skip the bread crumbs and lightly batter my eggplant slices in a thin coating of egg and Parmesan, then pan fry them rather than go the tradition oven route. To put the dish together, I stacked the cooked eggplant slices, with generous spoonfuls of sauce and shredded mozzarella between the layers, and lightly broiled the completed stacks until the cheese was hot and melty. The resulting dish was simultaneously hearty and filling, but light and healthy; and the earthy flavor of the eggplant melded wonderfully with the savory goodness of the red sauce. Definitely one of the best versions of eggplant parmesan we’ve ever had, and one that we’re going to keep in our recipe arsenal forever! 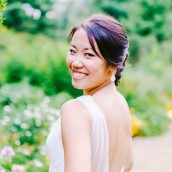 I am an attorney, a lover of reality television (esp if food is involved), a stress-eater, a voracious reader, and a shameless sci-fi/fantasy nerd. I love to eat, I love to cook, and I love to make other people eat what I cook.