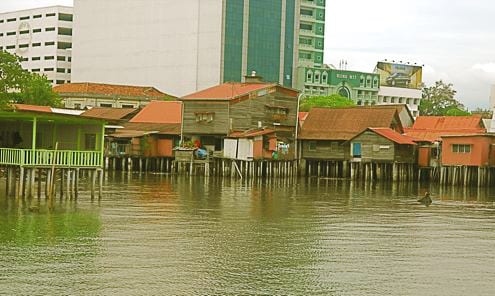 Boulevardier – A Neo-bistro in Dallas

While some versions contain coconut milk, the Penang laksa with “assam,” or tamarind, gives this noodle dish delightfully sour, rather than sweet undertones.
By Marissa Sertich

The smell of sambal, the ever-present fish paste, hit my nose, making my eyes water.  A whiff of durian, an infamous, foul-smelling fruit, followed.  I scanned the hawker center, or traditional pavilion-style food court, to avoid a closer encounter with the stuff and spotted one of the giant, knobbed fruits protruding from a bulging plastic bag carried by an elderly Malaysian woman.  I strategically chose two seats between a table of toothless men on their third round of beer and a young mother coaxing a child to eat another spoonful of broth.

Only an hour flight from Singapore, my boyfriend and I had arrived in Penang, Malaysia.  Straddling the Strait of Malacca, Penang is an island located on the northwest coast of Malaysia and is famous for its street food and beach community (Although, swimming burkas are widespread, the area thrives on tourism and women visitors can also comfortably wear a bikini).  It seemed like an ideal spot for two food-centric, beach bums like ourselves.  Although, I’d never had a burning desire to visit Malaysia – it’s not exactly Bali or Bangkok, or one of those tourist spots over-romanticized by Westerners – I had my heart set on a bowl of Penang assam laksa.  We headed strait to the popular and convenient Gurney Drive Hawker Centre, known for its variety of Penang hawker food.  Located along the northern eastern coast of the island, the hawker center is only a few miles from popular beach resorts and hotels and is a quick, drive from the Penang Botanical Garden.

Laksa is a popular spicy noodle soup throughout Malaysia, Singapore and Indonesia that I’d fallen in love with and wanted to sink my spoon into every variety possible.  While some versions contain coconut milk, the Penang laksa with “assam,” or tamarind, gives the dish delightfully sour, rather than sweet undertones.  Coming in seventh on the CNN “World’s Fifty Most Delicious Foods,” list in 2011, it is a fish-based broth made from mackerel, poached with tamarind, chilies and lemongrass, served over thick rice noodles.

My boyfriend went to order the soup from a nearby stall, while I flagged down the nearest “Tiger Girl.”  Each hawker center has women designated to sell the various brands of beer.  Tiger girls wear blue and yellow and only sell Tiger Beer, Heineken girls wear green and white, and the Carlsberg ladies sport bosomy black and gold numbers).  I raised two fingers, simply saying “two Tiger” – an action that is universally understood throughout all of Southeast Asia.

My boyfriend returned with a bowl of the soup and a giant plate of fried dumplings.  We couldn’t go a day without dumplings in some form.  They were consistently amazing, and had become a go-to accompaniment when trying out a new foods.  If the stingray, or chicken feet, fish head, or whatever, ended up being “a good thing to try,” rather than something we actually wanted to eat, dumplings always saved the day.  These had a vegetable filling with a perfectly crisp and greasy exterior.  In total, a giant bowl of laksa and dozen dumplings cost sixteen ringgit, or about five American dollars.  While food is generally inexpensive, be wary of beer prices, which vary depending on your location (and the time of day) and can end up costing almost twice as much as the food. 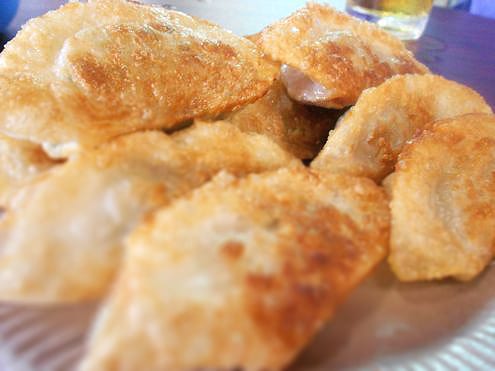 I lowered my face toward the laksa.  It was savory, tangy, but not overly fishy and I breathed in until I felt the steam warm my lungs.   Using chopsticks to lift the slippery noodles and bringing the bowl halfway to my mouth, I slurped my first taste.  The sour tamarind caused a sensational burst of saliva from the back of my throat, as the end of a rice noodle whipped my nose on its way in.  The flavors were dramatic and layered with spicy, sour richness.  Having never had anything like it, I took mouthful after mouthful in wonder, sharing only when my boyfriend reaching for the spoon.

As I drained the last bit of soup onto my spoon and into my mouth, I knew that this was one of those foods – I’d daydream about Penang laksa from a cold New York apartment, or try to find its equivalent at some Malaysian restaurant only to be disappointed.  I may even make it at home, but the ingredients would be wrong and the flavor wouldn’t be the same.  That one, singular food moment had been created by the colorful smells of the hawker center, a blur of cold Tiger beer and sweaty backs from walking in the heat.   It was an experience that can’t be re-created, but can be logged into a beautiful library of travel memories from Southeast Asia.