All the mix-in’s for these almond butter blondies make their name quite the mouthful. We bet you wish you had a mouthful of these right now. 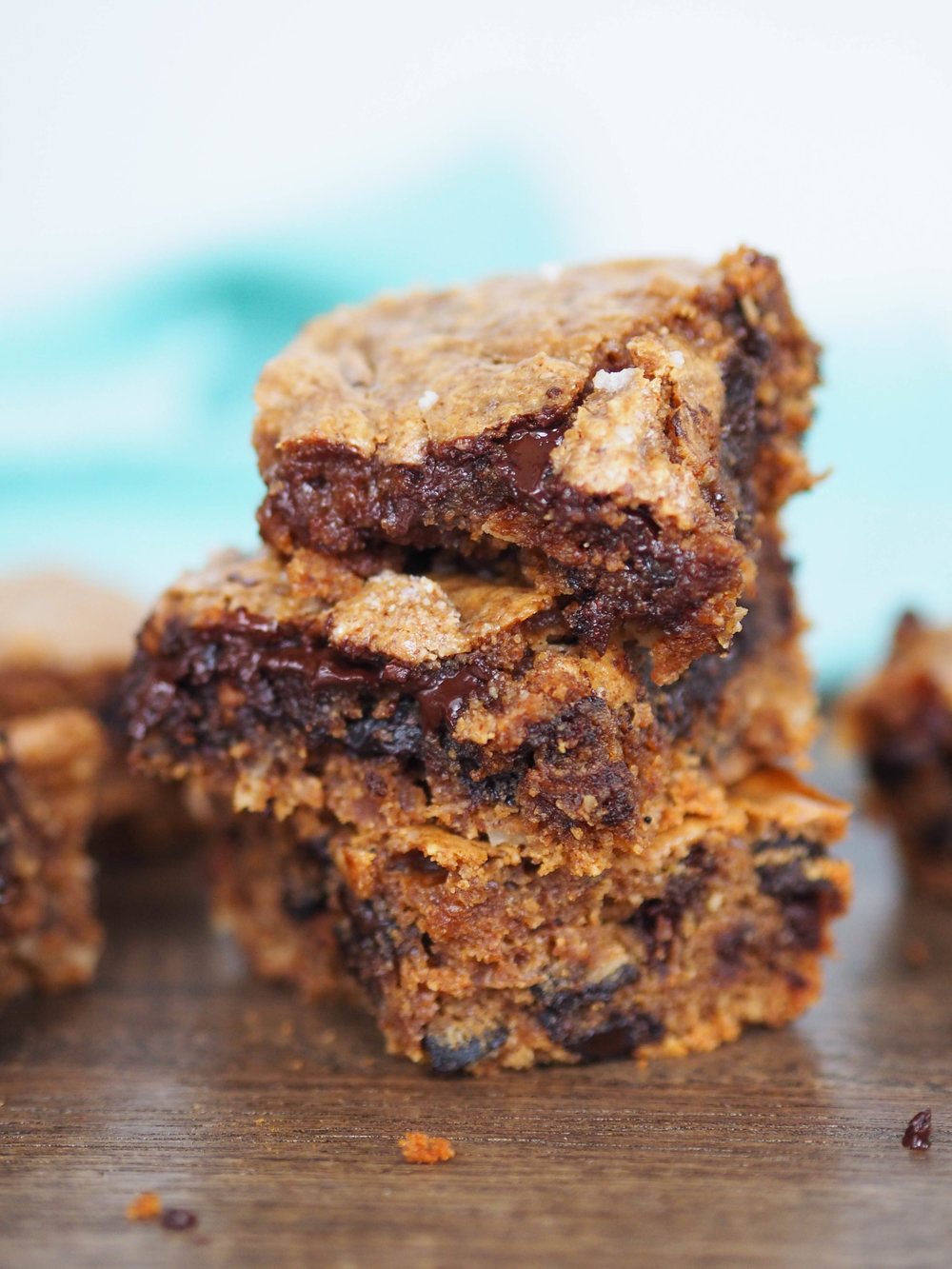 My house was recently inundated by sweets.

First, I whipped up these blondies for the blog. Then I was doing some recipe development for the national peanut board, making a couple batches of yummy chocolate peanut butter cookies for FNCE. And then the hubs went on a business trip to Asheville and brought me back a box of my favorite French Broad Chocolates because he is literally the best.

I’m more of a savory kinda person (cheese > chocolate), so we don’t usually have many sweets in the house. It’s not a deprivation thing, I just rather go out and get cookies from a bakery or enjoy an impromptu weekday ice cream date if I want something sweet.

Back when I was struggling with my relationship with food, I used to always have a “healthy” homemade sweet in the house. It was around the time pinterest was coming out and clean eating was becoming popular, so I had no shortage of gluten free/clean eating/sugar free/insert your diet sweets that were new and exciting to make. Like, the idea that you could make chocolate with cocoa powder and coconut oil blew my mind. Making cookies without sugar was new level.

I would cook something new each week because I was afraid my sweet tooth would hit and I wouldn’t be prepared with something sufficiently “clean.” I felt like I had to eat a “healthy” sweet every day to stave off my sweet tooth, but I always ate a ton because that’s what happens anytime you’re deprived of something. In my mind, it was a “healthy” sweet so I was never concerned about it. 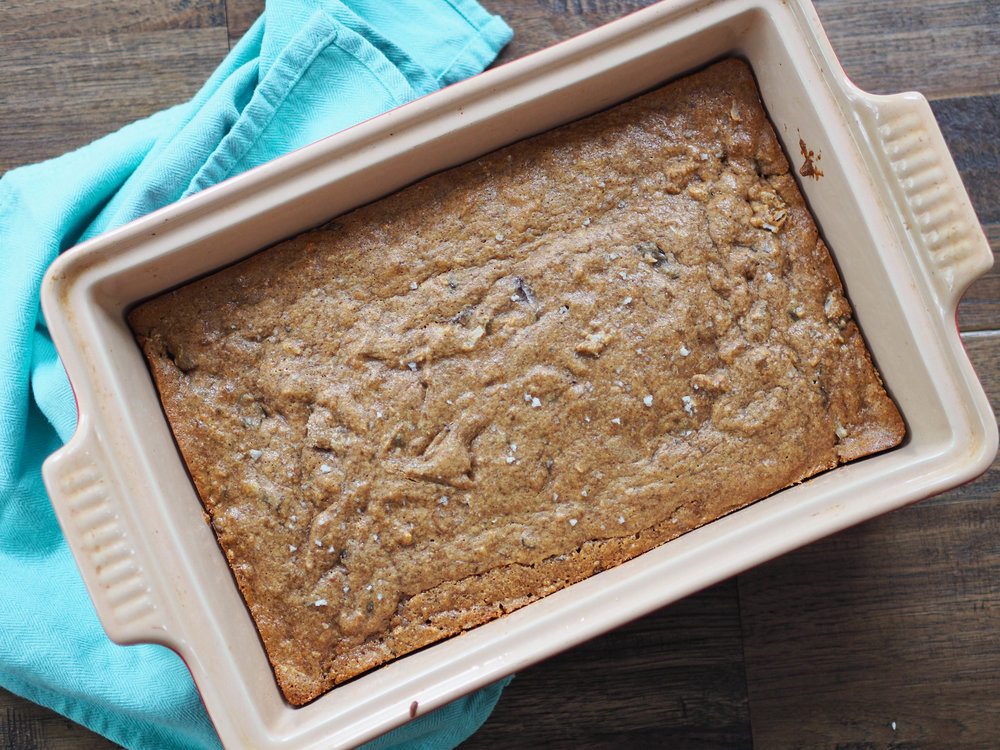 There’s something funny that happens in the brain as soon as a food is labeled “healthy.” Studies show most people eat a larger quantity of “healthy” foods, not paying attention to fullness or the pleasure point where eating more is no longer pleasurable. I had a new client tell me last week that she makes “healthy” brownies specifically so she can eat more of them. I think that’s a perfect example.

Studies have also shown that labeling food as healthy changes our perception of how satisfying that food is. There was one study done with milkshakes where both groups were fed the same one, but one group got a “healthy” milkshake and the other got a “decadent” milkshake. Even though they were the same, the group with the “healthy” milkshake ranked it as being less tasty, yet still ate more. That’s a problem, because if you’re not satisfying a craving by eating something pleasurable, that craving is never really satisfied. When I hear someone say something like “that diet ice cream tastes exactly like regular” I’m always suspicious.

Through my intuitive eating practice, I’ve discovered that I’m not much of a sweet person, unless it’s something really special and unique. I get a lot more satisfaction enjoying a dessert out of the house than some random raw concoction that’s supposed to taste like cookie dough.

I like to use nut butter over flour to make blondies and brownies because they turn out extra-fudgy and moist, just how I like them. Boo cakey blondies. Yay fall apart, melt in your mouth tender blondies with a crackly crust. 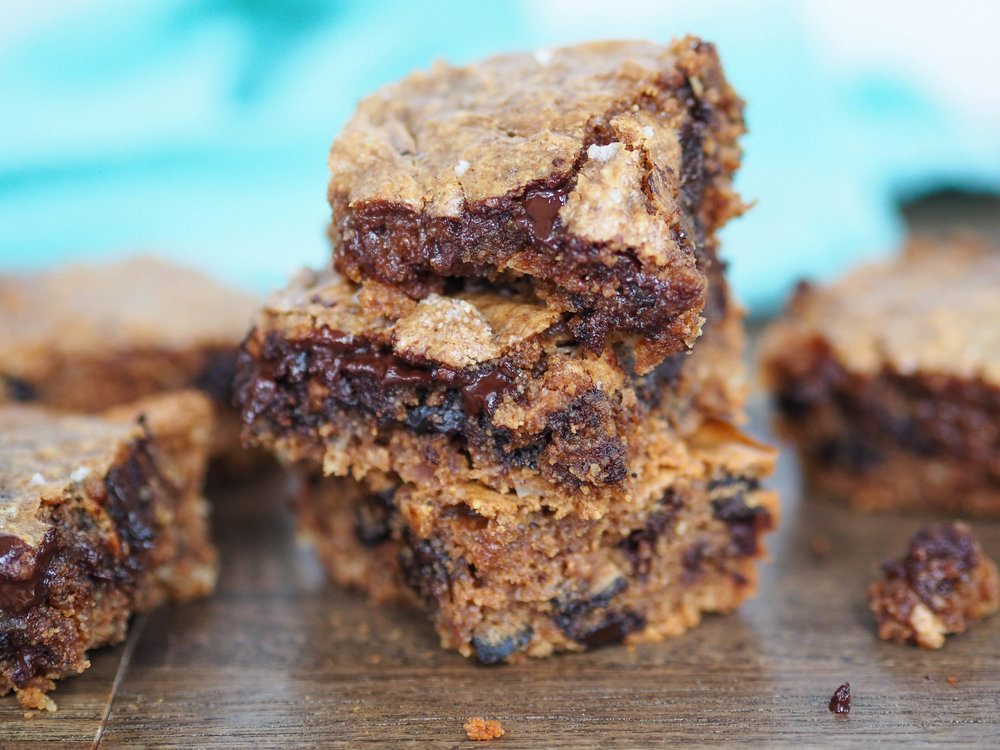 Print
All the mix-in's for these almond butter blondies make their name quite the mouthful. We bet you wish you had a mouthful of these right now.
Author: Rachael Hartley
Recipe Type: Dessert, Baking
Ingredients
Instructions
3.2.2885

8 Bologna Recipes to Remind Us Why We Love It