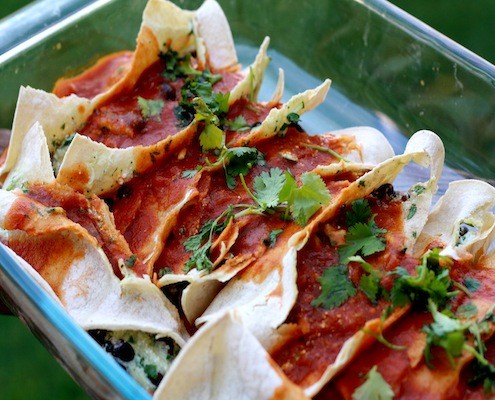 The first time I flipped through the January 2011 issue of Everyday Food, I don’t remember this recipe jumping out at me. Most of the time I rip recipes out of magazines and recycle the rest of the issue (…unless it’s a Cooking Light magazine. I like to keep a big stack of them on hand!). For whatever reason, I hadn’t tossed this copy of Everyday Food and when I saw the recipe for Bean and Cheese enchiladas, I was intrigued.

Enchilada recipes don’t typically have cottage cheese, at least not as its only form of cheese, so I was curious to see how these fared. I’m no stranger to odd enchilada combinations, having made a Black Bean and Sweet Potato variety as well as a Kale and Bean with Pumpkin Sauce variety before (and the even more unique Peanut Butter Banana French Toast Enchiladas!).

Rather than follow the recipe exactly, I bulked it up with some vegetables, adding some chopped spinach and grated zucchini to the filling. The verdict on these? Definitely another winning enchilada recipe to add to the files! The vegetables were hardly noticeable, but I felt good knowing they were in there. The bean and cheese filling was light and creamy and the sauce had just the right amount of kick. I thought it was odd that the sauce was added after baking the enchiladas, but it did prevent any soggy tortillas! My only complaint was that I had the hardest time rolling my corn tortillas, even after I warmed them in the microwave. I might have overfilled them a bit, leading to too much pressure…hence all the cracked tortillas you see in the picture [and the fact that I failed to read the part in the directions about spraying each with cooking spray]. Thankfully only presentation, not taste, was affected. Next time I might try to layer the tortillas and filling like I do in the Stacked Roasted Vegetable Enchilada casserole. If you choose to go this route, just increase the baking time and remove from oven when warmed through!