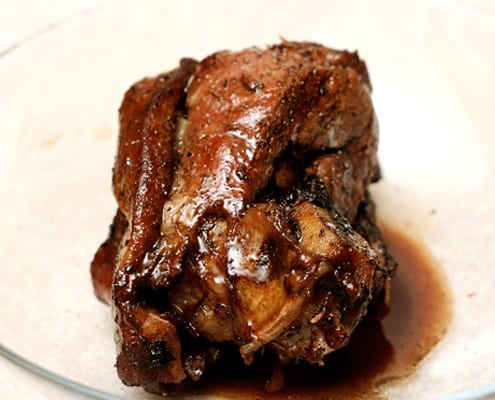 If “man’s cooking” in the summer season is all about the barbecue grill, then surely its winter variant is braising. Noah Charney tells us all about it!
By Noah Charney

If “man’s cooking” in the summer season is all about the barbecue grill, then surely its winter variant is braising. Really just a fancy word for stewing, cooking meat long and slow in a liquid. Braising is my preferred cooking method when the days grow short, icicles cluster outside my window, and strong winds sweep off the frozen marsh near my home. Traditionally a winter cooking technique, braising ticks a number of warming boxes. It heats the house vicariously, through the long, slow, and steady dissemination of oven heat. Wonderful smells accompany the cooking process, which could not be any easier. The food that comes out of the process is richly layered in flavor and texture, and can be transformed easily into multiple dishes. From a man’s perspective, there is as little to clean as possible (all the action takes place in one pot), there is as little fussy cooking as possible (I’ve nothing against fussy cooking, but when time is short, this is a great shortcut), and the results will wow the relatives who come over for the holidays. When it’s too darn cold to man the grill, get your braising on.

I learned about braising from a wonderful book by former New Yorker fiction editor, Bill Buford. The book is his best-selling memoir about quitting the New Yorker for a year of foodie adventures, when Buford first interned himself to be a “kitchen slave” in Mario Batali’s Babo, and then did the same in Italy, first learning to make pasta and then interning with a butcher, both in Tuscany. Part of the appeal of Buford’s behind-the-scenes book is how he strips the mystique from the cooking process. Without illustrations or proper “recipes” per se, he simply writes out how to cook things. Odd how this variant on a cookbook should feel less intimidating, but the ability to summarize how to cook stuff in about two sentences pushed me past a psychological block. I cook, but not as elaborately as I feel I should. All of a sudden, Buford opened the door to the world’s easiest, and most satisfying, cooking method.

At its most basic, here’s what you do. Get any cut of meat, and cheap, tough cuts are fine, because you’ll cook the daylights out of them anyway. They are usually the most flavorful, but require long cooking to make them soft enough to eat without bionic dentures. Beef, veal and lamb all work, as do duck and chicken legs (which cook far more quickly). I’m a fan of beef or veal shank. Where I live, in Slovenia, you can get young beef, which is somewhere between beef and veal, and that’s a good choice, too. A cut with a bone, and even with gristle, can be good, because over the long cooking hours, the cartilage and marrow essentially melts and thickens the sauce.

Preheat your oven to around 180 C. You’ll need a heavy cooking pot that can be closed, like a Dutch oven, a Le Creuset, or what have you. In the pot, brown the meat quickly on all sides—you’re not trying to cook it, just giving it some color and bite to the skin.

Here’s the creative part: pour any liquid you like over your meat, nearly covering it. Only have water? You’re making Irish stew, and it’ll still be good. But the best liquids are combinations of broth (beef, vegetable, chicken, your call), and wine (red or white). Different wines and broths add different flavors — you should experiment. But don’t worry about the price of the wine. Cheap plonk will make just as tasty a dish as the fancy stuff. Cheap Chianti works, and I’ve had good luck with inexpensive Rieslings, Muscatos, and the like, in the white family.

Once the liquid is added to meat, add in anything else you like: salt and pepper are obvious choices, as is garlic (mashed and skinned, but no need to get all fancy chopping it), and bay leaves. Have some carrots, celery, onions, turnips? Throw’em in. Want an Asian variant? Add some soy sauce, tamarind, lemongrass, you name it. Want to give it a Moroccan flavor? Prepare couscous as a side, use lamb, and throw in some cinnamon, cardamom, and raisins. You really can’t mess this up (which should be a relief to non-chefs out there, and means life couldn’t be easier for regular cooks too).

Put the top on your pot, and slide it in the oven. You now have permission to forget about it for the next, say, 3-8 hours. The longer you cook it, the more tender and flavorful it will get. The one caveat: even in a sealed container, unless you use the trick of padding the edges with dough (and who has time for that), the liquid will slowly evaporate. You don’t want it all to evaporate, because the sauce you end up with is the best part. You also don’t want anything to burn, so I’d check, every 90 minutes or so, to make sure the meat remains at least half-way submerged by liquid—if not, top it up.

Basic braising requires no recipe, really. Any meat, any liquid, any spices and any veggies, cooked long and slow. By long, I mean at least 3 hours. By slow, I mean maximum 180 C, but 130 is also fine for longer braises. You’ll know it’s done when the meat is tender enough to fall apart with the touch of a fork.

When you’re ready to eat, there are a number of ways to serve the meal, and you’ll wind up with multiple meals out of one inexpensive recipe. You can remove the meat, cut it into portions, and then serve it with vegetables, couscous, rice, pasta, or potatoes: anything that will act as a sauce conduit. You can also shred the meat, stir it into the remaining liquid, and you’ve got a thick, flavorful pasta sauce. Or, I like to do both. Eat the meat, perhaps with broad beans, one day. Then, the next day, reheat the remaining sauce to serve with mashed potatoes or pasta. If you want to get a little fancy, you can pour some of the liquid from your pot into a small saucepan and reduce it on the stovetop, adding flour or cream if you like, and you’ve got a nearly-instant gravy. The rest is up to you.