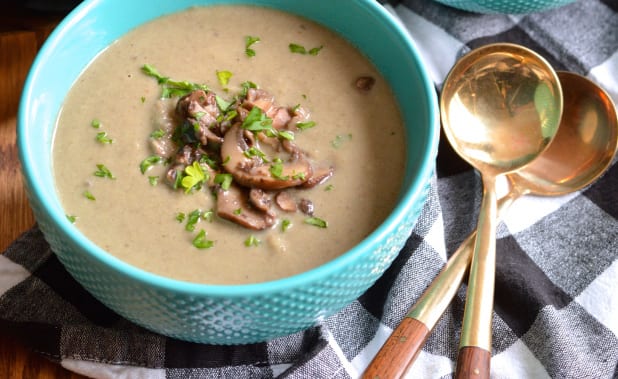 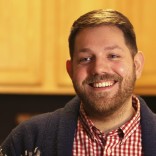 When I was growing up I had two working parents, so a lot of my afternoons were spent at my grandmother’s house out in the country in upstate New York. We always ate really well (too well, probably) at Grandma’s house, and lunch was always a big deal. Soup and sandwiches was a pretty popular lunch time menu, but I hated tomatoes when I was young so mushroom soup (from a can of course) was how I rolled.

I don’t know what kid likes mushrooms but not tomatoes, but what can I say, I was a weird kid I guess.

One of my great grandmother’s favorite lunches in the summer was a thick-sliced fresh tomato sandwich on white bread with a little mayonnaise and a generous sprinkle of salt. I, however, usually opted for velveeta grilled cheese (baked, not fried) with a bowl of cream of mushroom soup.

Mushroom soup has always felt like a perfect comfort food ever since.

I recently dug around for recipes to satisfy my mushroom soup cravings, but I was stopped dead in my tracks by how heavy most of them sounded. I’m sure you know by now that I’m not shy about using real butter and cream, but Jeez Louise! One recipe, from my best-friend-in-my-head Ina Garten, called for a whole stick of butter, a cup of half and half, and a cup of heavy cream!

I knew there had to be a way to make a silky, creamy, rich & hearty cream of mushroom soup without using that much dairy and fat, but was having a hard time figuring it out. Then a friend at work reminded me that I already know the perfect secret ingredient!

Aaaaaaaaawwwwwhhhhh! Look at how that beauty glows! Can you hear the angels singing?

I’ve already used this trick before, when making corn chowder this summer, and I guess I somehow just forgot about it.

Roasting cauliflower in the oven, rather than boiling it with the rest of the soup, keeps it from tasting cabbage-y, and once pureed super smooth, it adds an unbelievably silky texture that you’d truly never guess didn’t come from cream thickened with a roux. I don’t even understand how or why this works so well, but it really does.

I wasn’t intending to make a vegetarian or vegan cream of mushroom soup, just a lighter version, so I went ahead and kept the chicken stock and (some of) the butter. I also intended to add in just a bit of milk or cream at the end, but once the roasted cauliflower was pureed in, I realized I didn’t even need to. With that in mind, I now realize that it would be really easy to make this soup vegan if you want to. Just substitute olive oil or coconut oil for the butter, and vegetable (preferably mushroom) stock for the chicken stock. Since cauliflower is the only thickening agent, this soup also happens to be totally gluten free!

This soup is just what the doctor ordered. It’s so earthy and rich and… mushroomy. Using three varieties of flavorful mushrooms makes sure that every bit packs a serious punch. White wine adds a luxe floral note, fresh thyme compliments the woodsy earthiness of the mushrooms, and fresh parsley finishes the soup with bright green herbal flavor. While this recipe is healthier than most, I would never call it a “diet” or “light” recipe because it tastes way too good to be “health food”, and because it does still call for a good bit of butter and olive oil.

Thanks to the pureed roasted cauliflower, this soup feels every bit as rich and satisfying as you could hope. Some of the mushrooms are pureed too, but I like to reserve a few so you get some meaty bites of them every so often. You can use an immersion blender or a standing blender to puree the soup, but I will say that a standing blender seems to get the soup just a bit more smooth and silky. I used an immersion blender though, because it works almost as well and just seems safer, easier, and less messy.

5.0 from 7 reviews
Cauliflower-Cream of Mushroom Soup 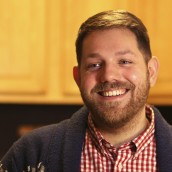