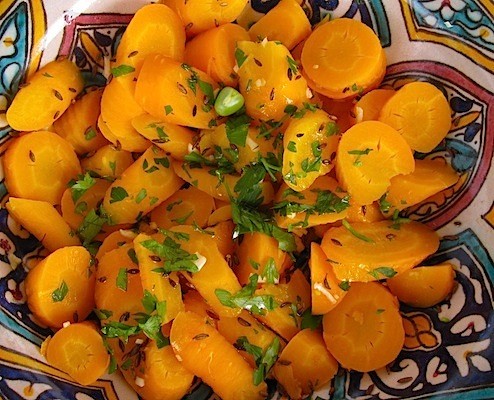 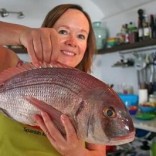 Anne Manson with one of the few Andalucian recipes that are influenced by the Moorish period.
By Anne Manson

From my terrace, you can look across to the North coast of Morocco. It always fills me with excitement when I think that that here I am in one continent, looking towards another continent, which is so close but yet so far away in terms of culture and cuisine.

It’s surprising really that there isn’t more of an influence on the cuisine here in southern Andalucia, given that the Moors lived here in Vejer for 600 years.  In 711, they invaded the south of Spain and called their land Al- Andaluz. They brought with them fruit trees of Pomegranates, Lemons, Oranges, Figs, Peaches & Apricots as well as Almonds, Saffron, Aubergines, Honey, Spices, Rice and so much more. When they were expelled by Ferdinand and Isabella in 1492, almost all traces of their cuisine went with them.

Just a few dishes with cumin seeds remain on the menu here, the most popular being a tapa of Carrots with Cumin & Garlic. I  LOVE this dish, not just because of the fantastic flavours but also because of its versatility. We  make it in class to serve  with BBQ’d Moroccan Chicken. It’s also fantastic with fish, pork and roast lamb too. Even just alongside a humble roast chicken. You can include it as part of a salad table, a beach picnic or even serve it with cocktail picks as it traditionally is, a tapa. The wonderful intense carrot flavour comes from boiling the carrots in their skins and then peeled when cool.  Don’t forget to toast your cumin seeds (dry fry in a pan) to bring out their flavour. Always serve this dish at room temperature and never straight out of the fridge. The spiciness comes from the garlic. 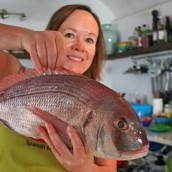 Annie Manson runs cooking classes and gourmet holidays at Annie B’s Spanish Kitchen in the wonderful Pueblo Blanco, Vejer de la Frontera, in the South of Spain. She is passionate about Spain, its cuisine and all the wonderful ingredients her enchanting area of Andalucia has to offer. Her recipes will focus on being fast, using fresh ingredients and always a splash of Sherry or Sherry vinegar. Sometimes both! Prior to life in Vejer, Annie ran a successful catering company in London, Annie B’s London.