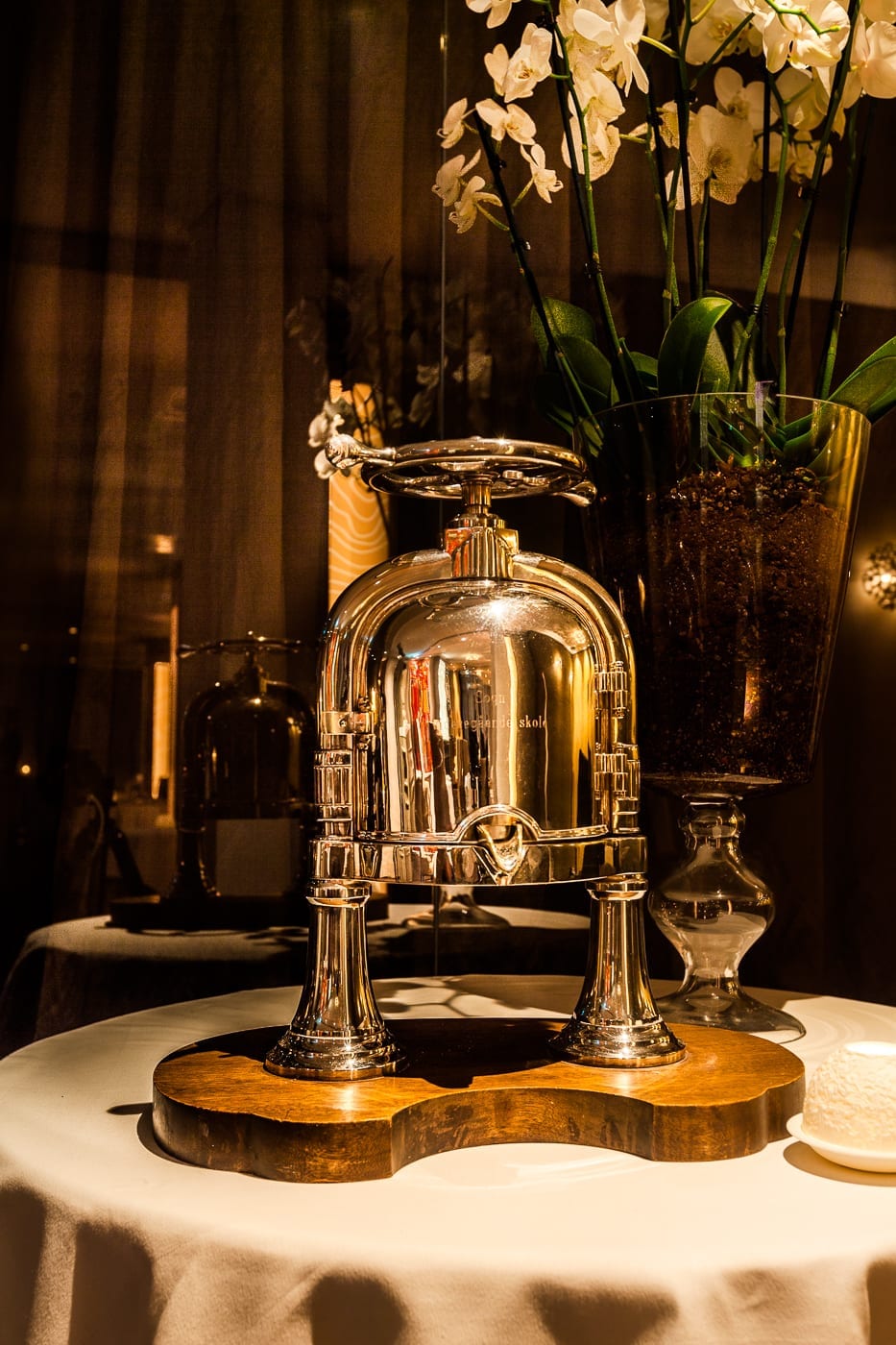 While French cuisine can be found in almost every metropolitan city of the world, only a few handfuls of restaurants dare to take on the torturous looking yet intriguing Canard à la Presse. Here’s a closer look at this rare French preparation technique. 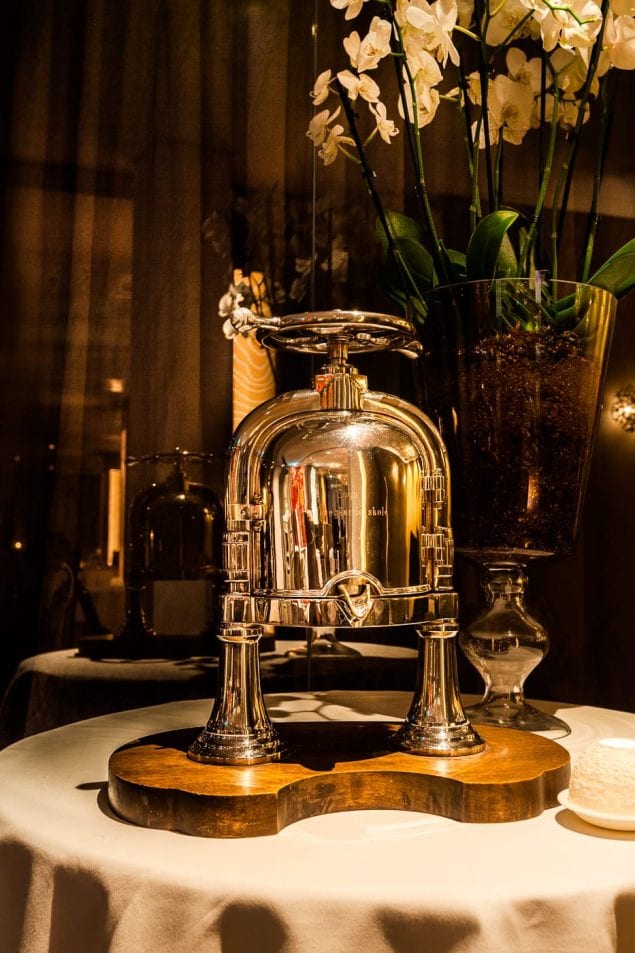 “This is fucking ridiculous. Wow”.

Not being known as someone who is left speechless, this is what an astonished Action Bronson managed to utter after trying the French delicacy at the upscale New York City restaurant Daniel’s (view extended video at the end of this article). And looking closer into the noble machinery and exquisite timing it takes to master this technique, one can easily understand why.

French cuisine tradition isn’t exactly known for being gentle or humane. Traditional dishes like foie gras or ortolan (where you literally engorge, blind and drown a tiny bird in cognac before consuming it by covering your head in a napkin to hide the shame) have shown the cruel nature of French cuisine, and although the duck press doesn’t reach that level of ferociousness, it still might not be for the faint of heart.

Press play and get a quick first look at the preparation of Canard à la Presse – from kitchen to table serving. Video by Stian Broch/stianbroch.com.

The method of preparation dates back to early 19th century Paris, when it was invented by Monsieur Machenet, and quickly thereafter gained popularity with top chefs of the city. The contraption itself is something worthy of innovative thinkers like Leonardo Da Vinci, and is a masterpiece on it’s own and is easiest explained as looking like a huge French press used for coffee, only made of shining metal and standing on solid (often duck-looking) feet.

Using your imagination the whole device can resemble a large mechanical duck, giving the overall experience an ironic twist. The classic dish that was invented with the use of this machine is canard à la rouennaise, translated into the not-so appetising duck in blood sauce, for the renowned Paris dinery La Tour d’ Argent, that still serves a rendition of this classic dish to this day.

As the name hints the main ingredient is a duck and the pre-preparation is a science itself. Although the technique differs slightly depending on where in the world it is served, it starts off with a duck that still has the heart, lungs and liver intact. This last one is removed and reserved for a different purpose, while the duck is lightly torched before being roasted, leaving the skin crispy and the inside relatively rare. Not so grisly or out of the ordinary so far, but this is just the beginning.

The show continues in the dining room on a table beside the guests, in clear view of diners. Here the breasts and legs are removed and taken to the kitchen to be prepared, while the spectacle in the dining room continues: when the rest of the duck carcass is cut in half. This is the part of the show where it takes a sadistic twist.

The whole carcass is placed inside the gleaming silver press including the internal organs. The lid is shut and then your server starts turning the big wheel which pushes a plate down, squashing the duck like an orange juicer. With every further turn of the wheel bones are crushed and organs liquefied, and more frothy pink duck juice pours out from the bottom.

This liquid is poured directly into a pan, where it is most often thickened with the chopped duck liver and flavoured with cognac, Armagnac or red wine and reduced until it reaches a perfect thickness. What happens next differs slightly in each restaurant, but commonly by now the duck breasts have been prepared, and are returned from the kitchen to be paired with the sauce and the lucky diner is served this French delicacy that truly uses the entire duck. Gruesome preparation perhaps, but kudos on the sustainable waste reduction.

Duck presses are not easy to come by anymore and restaurants that offer this, often require it to be ordered in advance. Are you craving to sink your teeth into this lavish feast? Here are some restaurants that use the duck press to perfection.

It’s impossible to say Canard à la Presse, without mentioning La Tour d’Argent in Paris. The place where the technique originally stems from. La Tour d’Argent is far more than just a restaurant – it is a Parisian institution dating all the way back to 1582 and was rumoured to be frequented by Henri the 4th. A tradition started in the late 1800s, when the restaurant was owned by Frédéric Delair. He started presenting a numbered certificate to each person who ordered the house specialty, which you might have guessed, is the Canard à la presse. In 1996 La Tour d’Argent was awarded 3 stars in Guide Michelin, it now holds a 1 star recognition, but is also acknowledged as one of the most important restaurants in French cuisine history.

Marchal is the resident luxury restaurant of the equally luxurious d’Angleterre hotel, and as you can hear by the name, French cuisine is in focus. The lavish Marchal opened in 1755 and their duck press is thought to be almost a century old, the tradition of serving the dish also dates way back. It was however discontinued in 2010, when the hotel and restaurant went through a comprehensive renovation. According to the tale, the press was lost and the memory of it started to fade, until new head chef Andreas Bagh arrived. He heard whispers and rumours of a “working duck press” to be found somewhere on the premises. His curiosity led him to start looking, finally finding it in the attic, the French delicacy made a triumphant return to the menu in 2016.

You probably wouldn’t connect Oslo with high-end French cuisine, but since opening in 2017, critics and foodies alike have praised À L’aise, and head chef Ulrik Jepsen, for truly bringing a high level of international cuisine back to the city. Reviews have been near perfect, with critics acknowledging the restaurant as Oslo’s best contender for a coveted Michelin star. Ulrik Jepsen masters the art of French cuisine and their version of the duck press is no exception. Here the ducks are matured for 3-4 weeks before undergoing the press. The impressive cherry on top at À L’aise? Their duck press is made of real silver, adding that extra wow-factor for the spectators.

Like La Tour d’Argent, Operakallaren also has a great history, Dating back all the way to 1787 when it was situated in the cellar under King Gustav the 3rd opera house, where it get’s it’s name that directly translates into “the opera basement”. Now the property houses four restaurants, a cocktail bar and an astonishing wine cellar, with a kitchen led by Stefano Catenacci, who was responsible for catering the wedding of Her Royal Highness Crown Princess Victoria in 2010. Pressed duck has been a long tradition at this establishment and to make the delicacy more attainable for curious minds, Operakällaren offers a special 5-course menu every Wednesday, where French duck directly from the press is one of the tasty treats you can indulge in. Operakallaren really combines the best of luxurious French gastro-history with a modern metropolitan twist.

Ottos’ is described as a “classic French restaurant with creative twists” and is the preferred eatery for Londoners to quench their appetite for the French delicacy. Otto’s has only been open for seven years, but already garnered a reputation as one of the best French restaurants in the country, with an impressive wine list and food made from the freshest seasonal produce available. At Otto’s there is no compromising with the quality, which is superior, and although the décor doesn’t exactly invoke the feelings of genuine classic fine French dining, the atmosphere is extremely homey and inviting and makes your dining experience even more comfortable. It’s the best of both worlds.

World renowned star chef Daniel Boulud’s eponymously named restaurant, Daniel, has since 1993 brought an exquisite taste of classic European cuisine to the Big Apple. Daniel Boulud is no stranger to world cuisine. He has 13 restaurants all over the world, and has garnered several accolades, such as James Beards Awards for “Outstanding Chef” and “Outstanding Restaurateur”. His flagship restaurant is located in the former Mayfair Hotel, on a side street to the prestigious Park Avenue. Adored by foodies and critics alike, especially the duck press served here has been a focus point among publications including Food Network, The New Yorker, New York post and for YouTube-series Munchies, when the infamous Action Bronson stopped by. See that video right at the end of this article.

We will round out our list with a reinvention of the pressed duck courtesy of none other than Gordon Ramsay. Le Pressoir d’Argent, or The Silver Press, is the adequately named restaurant of Ramsay’s Bordeaux location that shares its address with the Grand Hotel de Bordeaux. Of course, the canard à la presse is a given at this 2-starred Michelin restaurant, but what is even more interesting is their homard à la presse – or lobster press in layman’s terms. Their in-house device is very rare, made from solid silver, and is one of only five worldwide. This true collectors item is used daily to crush the shell and carcass of the blue lobster, in order to extract the juices. It’s a time-honoured ritual and a visual performance for the many patrons of the restaurant.

View what Action Bronson had to say about his encounter with Daniel’s pressed duck. 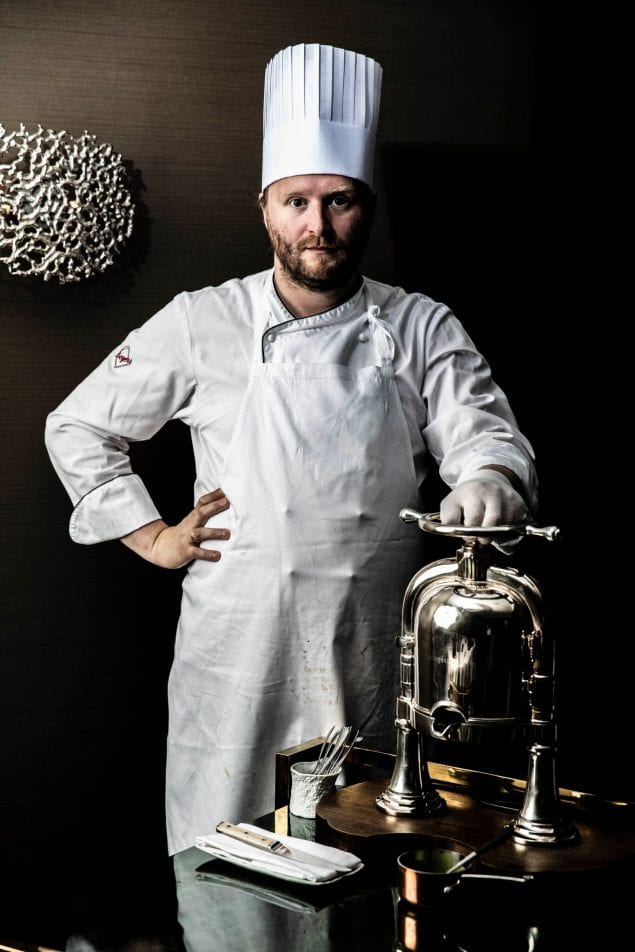 Still hungry for more information about Canard à la Presse? We asked Ulrik Jepsen from Restaurant À L’aise in Oslo to help us break down how the machinery works step by step. (All photos with the courtesy of Stian Broch/stianbroch.com). 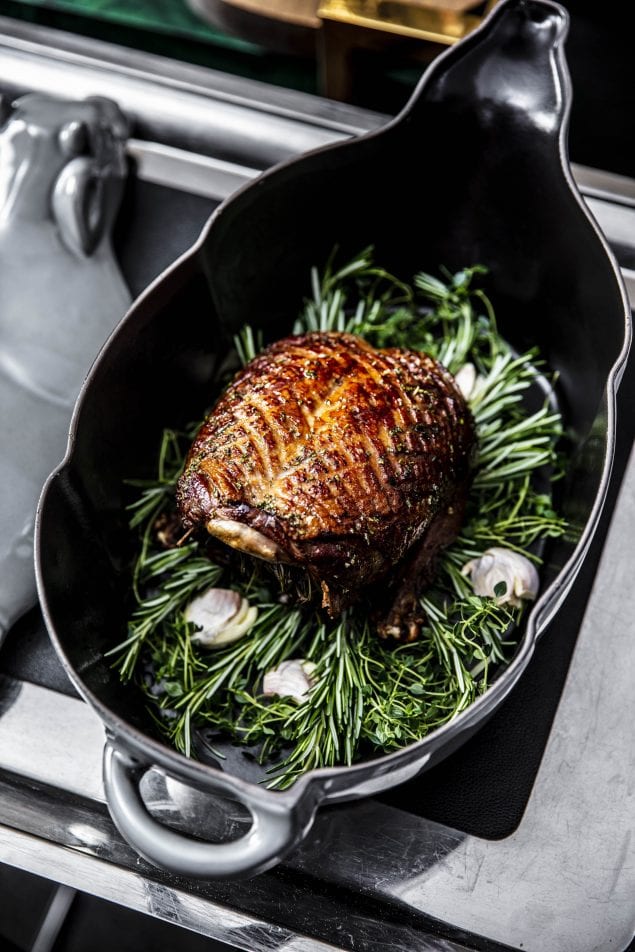 1.  “First we present the whole duck to the table, so they can see the whole fried duck and smell all the wonderful aromatics it is letting out. The duck is seared on the outside while still relatively raw on the inside”. 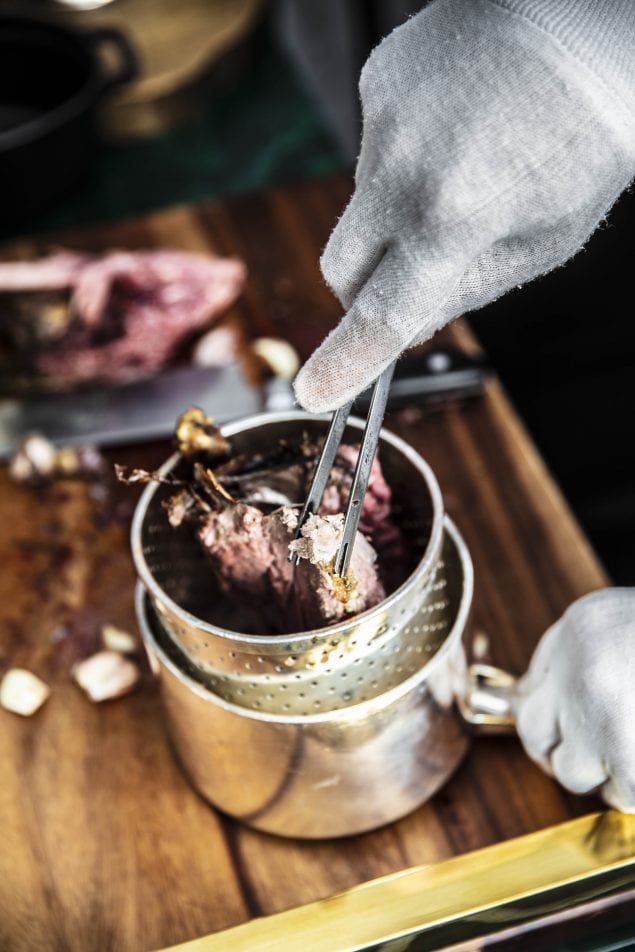 2. “Now we separate the bones from the meat table side. The breasts and thighs are brought back to the kitchen to be prepared there. The carcass and the organs are then put in the press”. 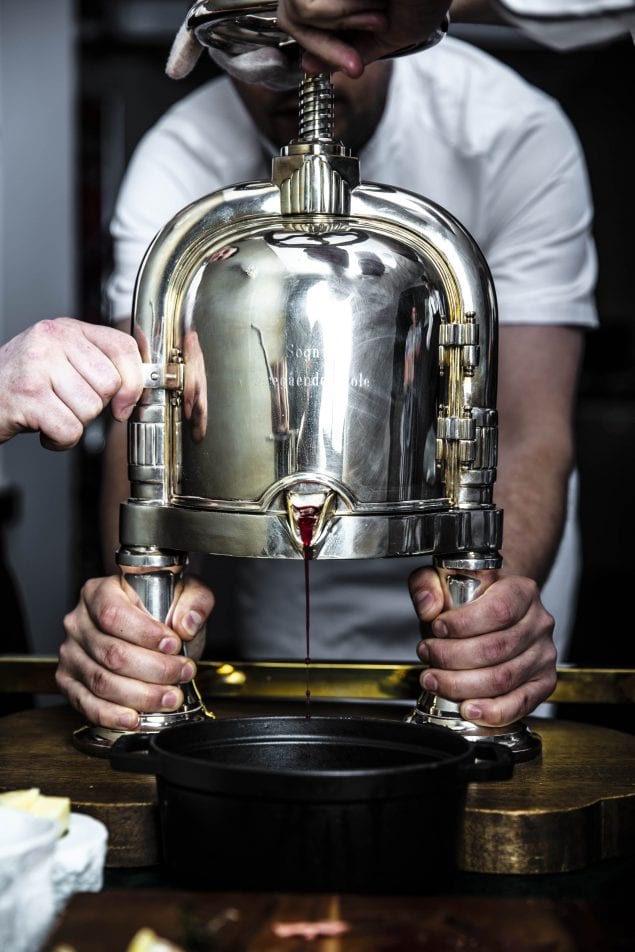 3.  “Now for the actual “hard work”. The wheel is turned, pressing the plate down and crushing the bones and organs. This is really a two-man job, as you need a pair of steady hands to hold the press, while another set of hands turn the wheel. The blood is sieved inside the machine before it comes out, so there aren’t any small pieces of bones or meat with the juice”. 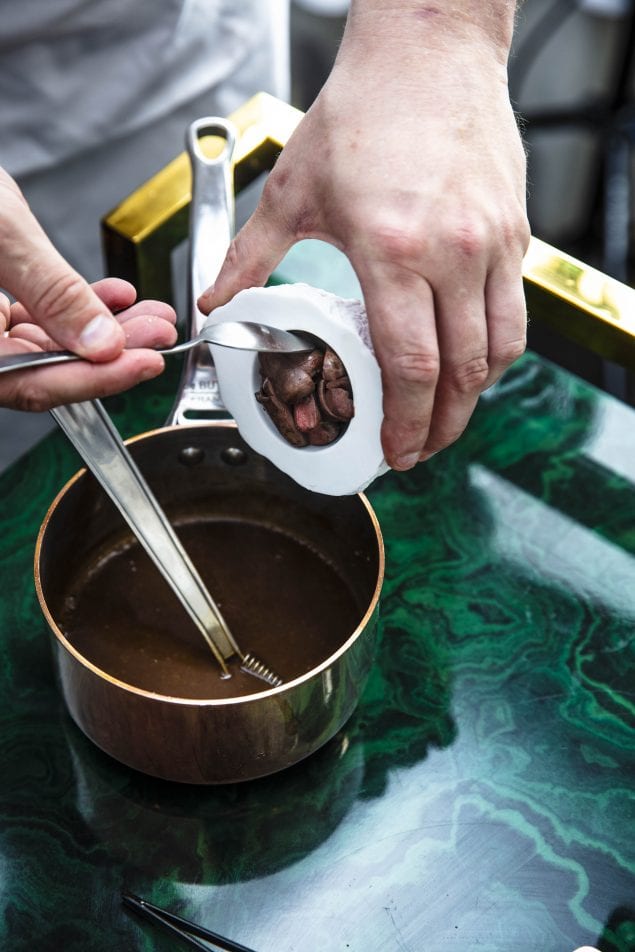 4. “Now we make the sauce – still table side – by adding the blood over low heat, alloying the sauce, which is normally made with red wine or cognac or port wine. This is kind of like making mayonnaise or bearnaise sauce and requires complete focus from the chef so it doesn’t go wrong”. 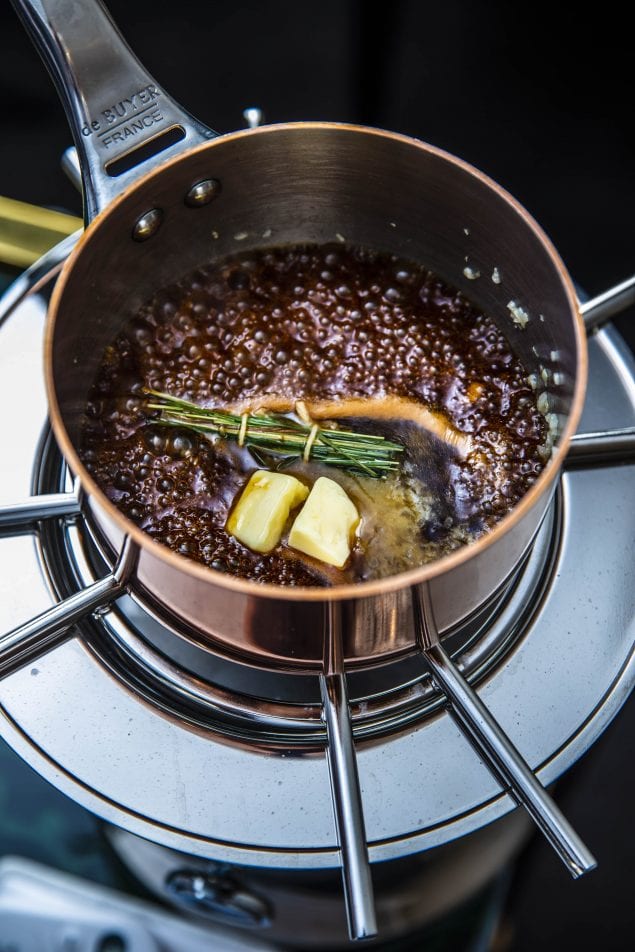 5. “Onion, butter and herbs are added and is sautéed in the saucepan while the sauce is slightly reduce. By this point the scent of the sauce really starts spreading in the air to the delight of patrons”. 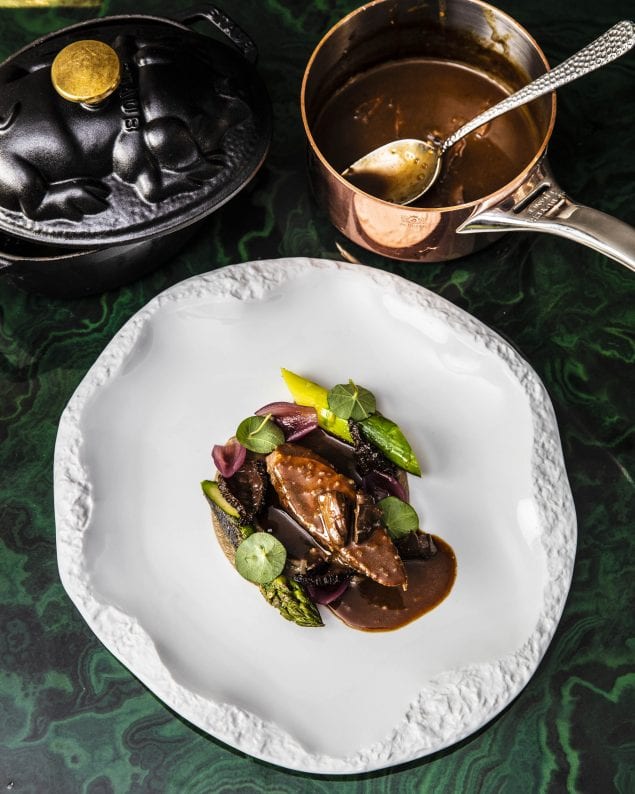 6. “This whole process last around 10 minutes, and the duck breasts have been prepared in the meantime. These are brought out to the table and the dish will be plated in front of the guest. Bon appétit!”.