The ancient Italian folk tale about a vagabond, a poor woman and a lovely Tuscan soup.
By Giulia Scarpaleggia 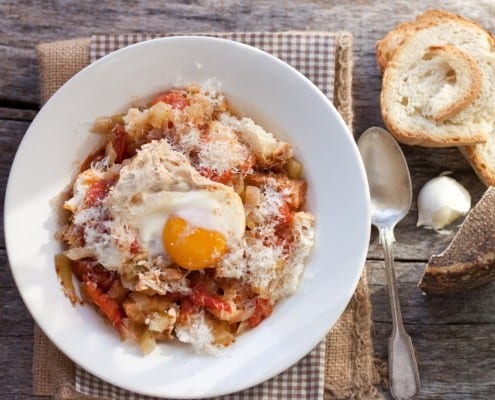 During those old times the vagabonds were still crossing the country, living by their wits to get once in a while a hot meal to give them strength during the long and frozen moonless nights. In those days a witty vagabond was wandering near to the village, spending lonely hours at the edge of the forest and in the beech clearing. In his wanderings the Vagabond met a peasant, a poor widow who lived in poverty in her old hut near the river, and asked for some benevolence and charity, a soup and a warm place for the night.

The poor woman gave reluctantly a shelter to the wanderer, immediately pointing out that there was nothing to eat, since the pantry was empty. The Vagabond said he knew the secret of a magic recipe, the stone soup, so all he needed was just some water and a stone taken from the riverbed. Put a pot of water on the fire, Grandma, I will take care of the soup.

And so the Vagabond walked up and down along the bank of the river until he chose a beautiful gray stone with red veins. He rinsed the stone and brought it to the kitchen where a pot blackened by the years was already simmering over the fire. The Vagabond threw the stone into the pot and sat down to wait, under the unbelieving gaze of the old woman, who was knitting by the fireplace with an air of indifference.

In the silence broken only by the crackling of the fire, the Vagabond said, as to himself:Certainly, if we had a pinch of salt the soup would be even better… And the old woman, crawling to the cupboard, sought out a pinch of salt at the bottom of an old jar.

The Vagabond added: Certainly, if we had a potato, even old, the soup would be even better. The old woman went to the vegetable garden behind the house with a torch and returned with an old and wrinkled potato and a cabbage leaf, burned by the winter frost.

Not satisfied, the Vagabond , stirring the stone soup, said to the old woman: and now, if only we had an old ham bone, the soup would be really good! The old woman remembered the old bone with no meat in her pantry and gave it to the tramp, who added it to the stone soup that, to be honest, was already smelling good. And now, Grandma, the soup is ready! If only we had a morsel of stale bread, the…

I see, I see… interrupted the old woman. She rose again from her straw stool, rummaged in the bottom of the cupboard and found a morsel of dry bread, from which she cut two thin slices to put at the bottom of the two bowl.

The Vagabond poured a generous portion of soup in each bowl, and sat at the table with the old woman for a tasty and warm dinner. At the end, before going to sleep in the barn, he went to pot, picked up the magic stone, washed it, wrapped it in a rag and put it in the cupboard, then said to the old woman: Grandma, whenever you feel like a good stone soup, all you have to do is to simmer a pot of water over the stove and add the magic stone. Goodnight and thank you for your gracious hospitality! 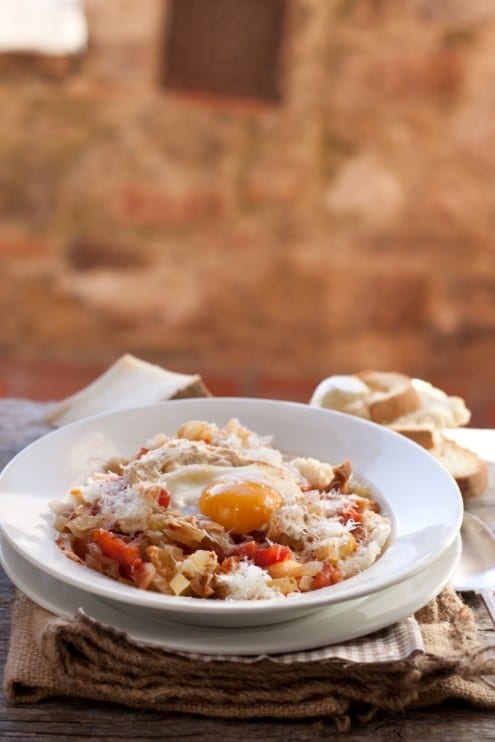 This is well-known folk tale, sometimes the Vagabond is a beggar, sometimes a wily monk, sometimes a soldier… but the long and short of the story is always the same: with just a little you can really do something good, being it considered literally or as a metaphor, perfect of those days of big dreams.

The first time I heard this folk tale, it immediately reminded me of the acquacotta, literally thecooked water, a soup typical of the Maremma, a Tuscan area which was once very poor. It is another good example of peasant cooking along with many other recipes that have as main ingredients stale bread and some seasonal vegetables. It is a nomad dish that followed the people from the mountain Amiata who moved in winter to the plain of Maremma in search of work, bringing with them a few ingredients, among which there were always onions. The basic ingredients of acquacotta are indeed water, bread and onions.

I made a richer version, the kind of soup that at the time of the lean was reserved only for holidays or lucky days. In addition to bread, water and onions, there are the tomatoes, a can of peeled tomatoes that Mum made during the summer, the egg cooked in the soup itself and a good deal of grated pecorino cheese, which is just divine as it melts with the liquid egg yolk. 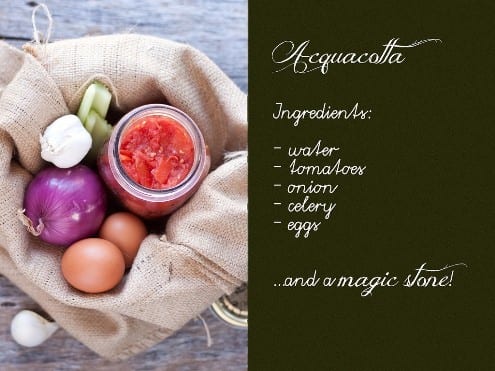 Chicken with Kale and Sweet Potatoes

0
Giulia Scarpaleggia January 26, 2012
No Comments Yet