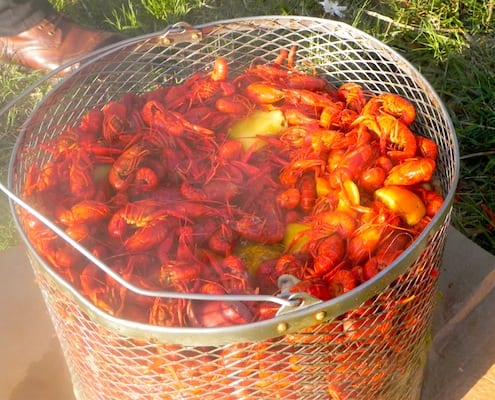 Tito Santana – The Place to Eat a Taco in Beacon, NY

These are the very vivid, very alluring memories I have of my recent experience at an authentic New Orleans crawfish boil. I consider myself extremely lucky to have witnessed this treasured Louisiana tradition in person, and to have reaped the benefits with all five senses. The process is a comforting and celebratory one, with throngs of hungry friends and family (and dogs) crowding around the giant boiling pot in the sunshine, savoring the deep scent of spices and vegetables swimming alongside so many red crawfish. I watched each stage with awe, wondering if I could ever replicate a boil of this scale back in Brooklyn. Not likely. Which is what made this event so magical to behold, down by the bayou, with wonderfully friendly conversation and the shared excitement of the finger-lickin’ feast to come brimming up inside everyone. 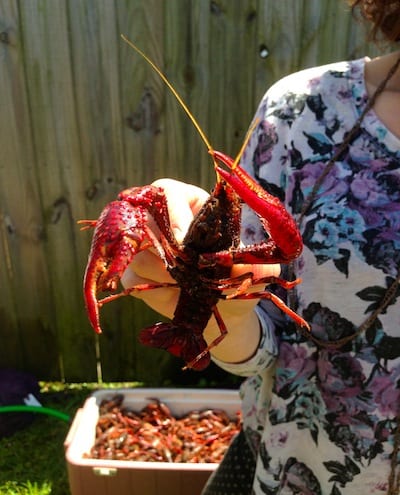 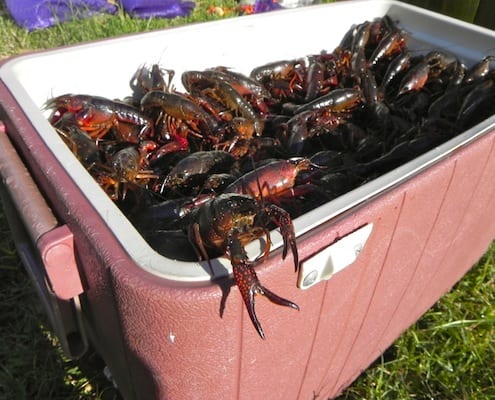 I saw many a crawdad wriggling their way towards escape, using their crustacean brothers as living ladders on the grassy path to freedom, and as my cousin suggested, it’s always kind to let a few succeed, escaping to nearby water to live another day. I was happy to oblige the little critters. But not all could survive, or the feast would be quite forlorn, so once the water was boiling with a rolling ruby mix of spices and a collection of vegetables, it was time for the crawfish to take their place in the massive pot. My gracious host  used three full sacks of crawfish and boiled multiple giant batches, each flavored with a unique mix of accompaniments such as pineapple wedges and citrus or artichokes and Brussels sprouts, with whole heads of garlic and halved onions always in attendance. The vegetables that took longer to cook started in the spice boil first as they needed longer to cook through, to be followed by the crawdaddies, who required only 5 minutes or so to complete their quick cooking.

Once boiled, the crawfish needed a speedy cooling to halt the cooking process, and I was introduced to my host’s ingenious method of freezing multiple two liter soda bottles filled with water and plunging them into the crawfish pot. Others might rinse the crawfish with cold water or fill the pot with ice, but as it was explained to me by the many crawfish connoisseurs present, that would only dilute the hard-earned flavor that’s seeped into the meat. And so the frozen bottles cool the crawfish while they continue to steep in the spicy brew, adding even more flavor for another 20 minutes or so before being drained. What happens next? 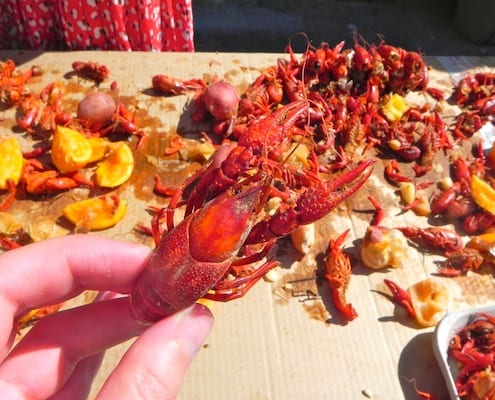 Partygoers descend over the cardboard-covered lawn tables, angling for a good spot as two fellas pour the succulent red bounty across the tabletops in a long, steaming stripe. And then, the feast officially begins. As I soon learned, the best way to eat a crawfish is to twist off the tail and squeeze out that pure piece of meat, the largest bite you’ll be getting from these tiny creatures. But as experienced old-timers will tell you, don’t dare forsake the head or larger claws, as you can pull apart the torso and scoop out the very flavorful fat from the head of the crawfish with your finger, or suck it out if you prefer. One section of the claw will pull apart to reveal another tiny but prime nibble as well, and so I learned that there’s so much more to eating crawfish than just enjoying the tail. The mudbug has many delicious pieces, all of which pair well with the spicy, tender onions and garlic, or those batches spiked with pineapple. I found that the boiled vegetables took on even more spices than the crawfish meat, with Brussels sprouts retaining an intense bit of the boil’s brew as if they were little sponges. With sips of cold beer between twists and bites of crawfish, the table was fully cleared in just a few blinks, aside from the neat stacks of crawdaddy carcasses lining the outside edge: the sign of native crawfish eaters. 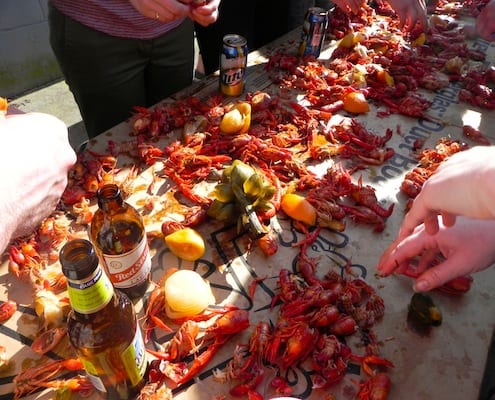 Once the debris was cleared from one batch, another steaming pot was spread across the table, each time met with the same fervent snatching and twisting and sucking from all around the table, until every last little bug was devoured. It was a feast unlike I’d ever seen before, and one particularly rare for a New Yorker. It was purely joyful, viscerally stimulating in its messiness and unbelievably delicious, with the best company I could have asked for. I can only hope I have the pleasure of enjoying it again one day soon, as it is intensely addicting, both for the closeness shared between all the people involved and the unique and personal flavor of a supremely regional specialty. I can’t wait for next time.

Handmade Sweets From Milk and Honey on the Chattanooga, Tennessee North Shore

Tito Santana – The Place to Eat a Taco in Beacon, NY

Crawfish Ragout from Chef Thierry Connault of The Ritz-Carlton NOLA

How to Cook Crawfish – The Perfect Boil

Embark on a Crayfish Adventure in Smögens, Sweden