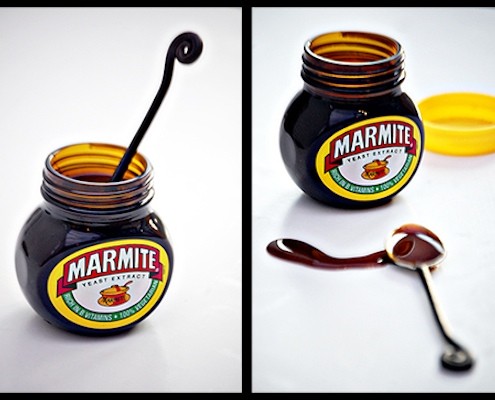 Marmite has divided the world into three camps – lovers, haters and the millions of people worldwide who have never heard of it.
By Ruby Moukli 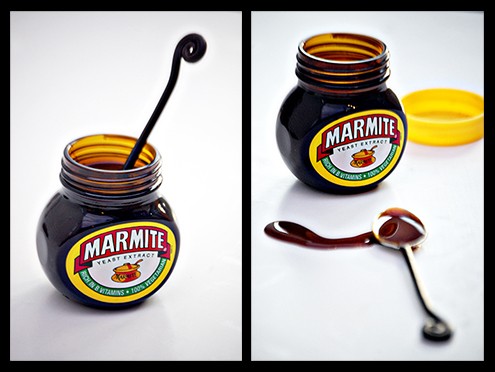 Are you a lover or a hater? Marmite has divided the world into two camps and their latest ad campaign asks you to choose. However, I think they have failed to take into account the millions of people worldwide who have never heard of Marmite, let alone formed an opinion of it.

So what is it? Looking like a thick, savory, molasses, and tasting like a bizarre and extremely concentrated blend of soy sauce and meat drippings, Marmite is a vegan, gluten-free yeast derivative, high in folic acid and sodium. It was originally a by-product of the beer-brewing process and, although originally created by a German, it was first manufactured in Staffordshire, England around the turn of the last century. Since my mother’s family has been in Staffordshire for generations, this means that I probably have quite a bit of Marmite in my veins, despite only tasting it for the first time relatively recently. 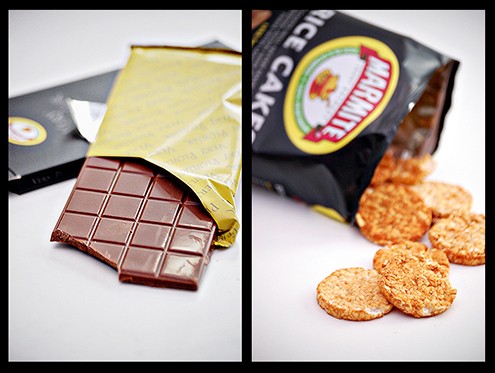 In fact, I managed to live in the UK for seven years before encountering Marmite in any meaningful sense. My son, one morning, asked for Marmite on his toast. I was gobsmacked (as they say here). It seems they give it to the children at nursery – and the children love it! This was a revelation to me, mainly because the other nursery offerings were all relatively bland. Marmite is an extremely strong flavor, hence the ‘love it or hate it’ campaign. Yet, in Britain, Marmite is a popular breakfast spread for kids, and is also often seen as a filler in children’s sandwiches, spread thinly over buttered bread.

The answer to why children love it may lie in the fact that Marmite is essentially pure umami, the ‘new’ fifth taste sensation (the others are salty, sweet, sour and bitter). Umami, meaning delicious taste in Japanese, is rather elusive and hard to define, but you know it when you taste it. Have you ever had one of those Japanese rice crackers, baked in soy sauce and wrapped in dry seaweed? Those are very umami. And they also happen to taste very much like Marmite. In fact, an American friend who was visiting recently, and who doesn’t much care for Far Eastern cuisine, tasted it and went green. Her comment was that Marmite was ‘everything she hated, concentrated in a jar.’ 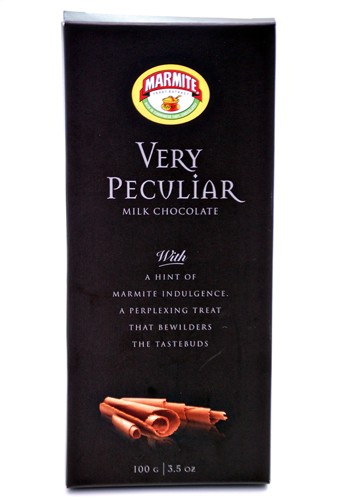 I wonder what she would have made of the chocolate bar? Yes, chocolate. I recently happened upon this and obviously couldn’t resist buying it. My verdict: it wasn’t quite as disgusting as I thought it would be, although it does live up to its name. Very Peculiar indeed. I might have liked it more had it been dark chocolate and not milk, but my daughter loved it. Go figure. 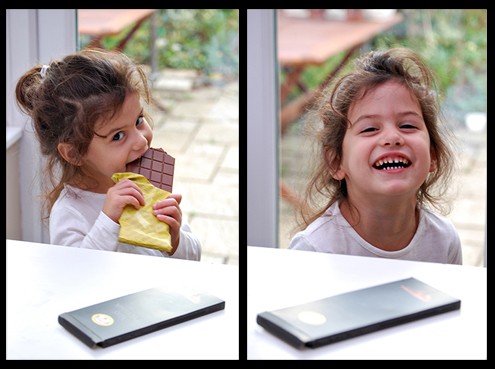 In sum, contrary to the company’s assertions, I can safely say that I am neither a lover nor a hater. I’m surprisingly indifferent to it. A tiny taste on the end of my finger sets my taste buds aquiver, and I have happily munched on the rice cakes. I can also easily imagine using it as an ingredient to deepen the flavor of sauces. But in chocolate, or spread on a sandwich or toast? Not for me, thank you. How about you?

From Bacon with Love: In Defense of the Green Juice