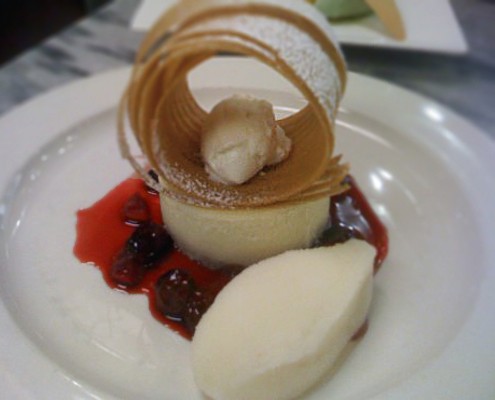 Despite the current trends and gastronomic growth, dessert garnishes remain in the dark ages.
By Marissa Sertich

A great era of food sophistication is upon us – Food and science are working hand-in-hand from Catalonia, Spain to Chicago, Illinois, the modern world is developing a heightened awareness of local food sources, and the term, “slow food,” has become increasingly recognized in the American home.  Despite these movements and our gastronomic growth, dessert garnishes remain in the dark ages.  I am talking about tuile.

The tuile (pronounced “tweel”) is a thin French cookie that is typically molded over a rounded object, like a rolling pin or wine bottle, and curved to resemble a roof tile.   According to the Food Lover’s Companion, it is traditionally made with almond, but it commonly protrudes from desserts as a pale and wilting vanilla cracker.  The gratuitous garnish aims to add flourish and height to a plate, but in reality, it only adds a colorless cookie that appears better designed for sailing than for eating.

The pandemic of rampant fine-dining tuile usage may seem laughably small in comparison to the creative applications of spherification or the topic of sustainably farmed fish, but it is as disheartening to an eager pastry cook as a jumbo bucket of Kentucky’s best is to a local chicken farmer.  While there are exceptions, the tuile is an indicator that the dining establishment thinks little about flavor, doesn’t have time for creativity, or has simply been stuck in a culinary rut since the 1980s.  The sight of a tuile makes the cuisine of Alinea and elBulli sound like unattainable fairytale.

There is nothing inherently wrong with tuile.  The classic French cookie might be appealing atop a Bavarian cream.  It can be delicate and light, crisp and elegant, but more often than not it is used as an outdated solution for adding a false sense of sophistication to a bowl of ice cream.

A superfluous sprig of mint or a vanilla tuile does not automatically qualify for fine dining and can detract from a dessert experience if it does not offer deliciousness and desirability equal to the dessert itself. Even the simple step of making slight variations of a tuile, like adding pistachio or pine nut, can enhance the meal’s integrity.

Fine-dining dessert does not need fancy spheres, dusts, gels or foams, but it does deserve a bit more consideration.  As cooks, chefs and diners we should be on constant mission for better flavor, which means taking time to create garnishes that contribute to the flavor profile of each dish.  Each bite should delight and inspire the palate.  It is restaurant complacency that hinders tastiness and as patrons become more sophisticated, it is only a matter of time until they notice this worn-out garnish and say, “What’s the deal with tuile?”