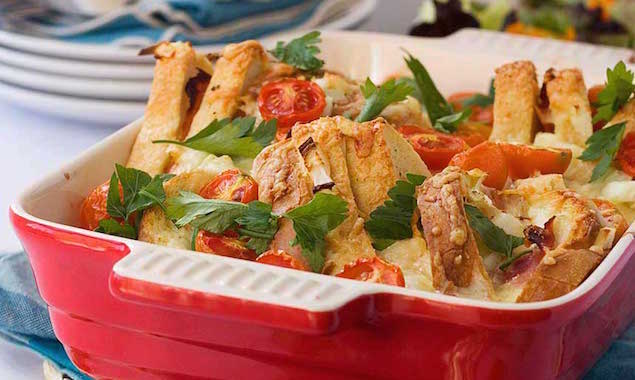 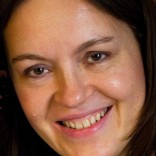 Hi, I'm Helen. I'm originally from the UK but currently…

Easily make the classic French ham and cheese sandwich for a crowd of brunch eaters with this croque monsieur breakfast casserole.
By Helen Buxton 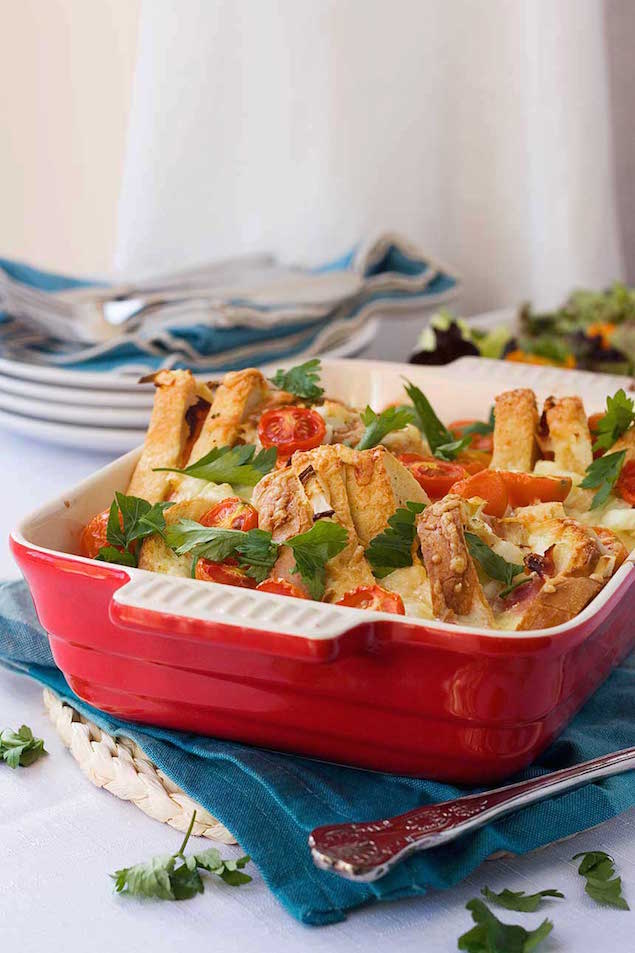 Who has tried a croque monsieur? (roughly translated as a toasted cheese and ham sandwich just in case anyone is wondering!) Piled into a baking dish and drenched in an egg and milk mixture – just like french toast – and baked, they can be transformed into a tasty and attractive weekend brunch dish. 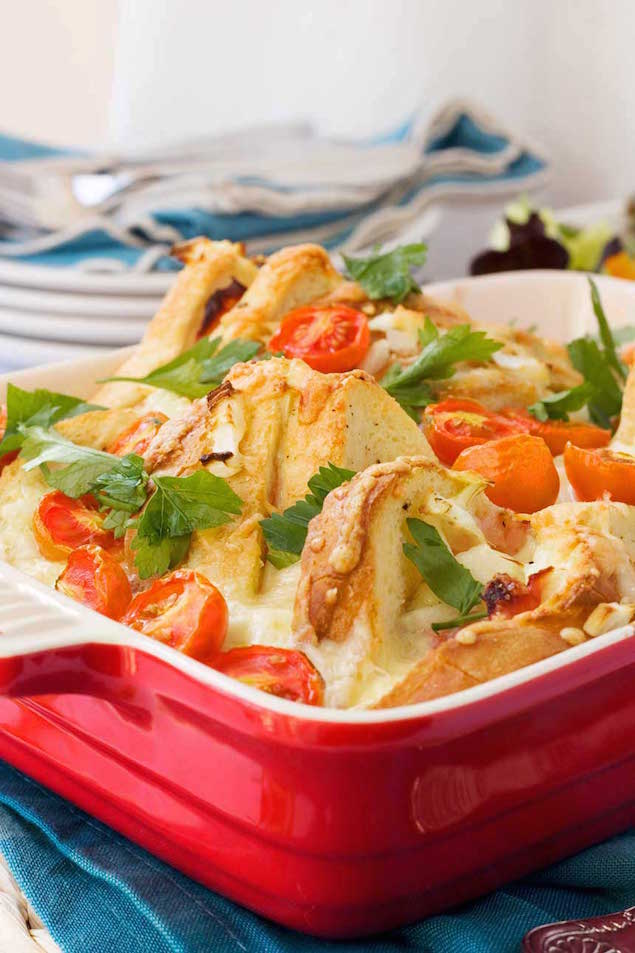 This is one weekend brunch-y dish that can easily be breakfast, lunch, dinner or anything in between. It can also be made ahead and then thrown in the oven whenever you’re ready.

So what on earth is a croque monsieur brunch bake? If you’ve ever tried a British bread and butter pudding, it’s a lot like that – but savoury. If you’re in the US or elsewhere, maybe the best description would be a sort of French toast casserole or ham and cheese strata?

Whatever you prefer to call it, it’s a delicious, comforting little idea that you can pull together in hardly any time at all. Really it’s just like making a pile of ham and cheese sandwiches, soaking them in a mixture of egg and milk, then arranging them prettily in a dish with tomatoes and cheese on top … and baking! How easy is that?

The other big bonus is that you can customize this to your heart’s content. This time I stuck to ham and gruyère cheese (hence calling this a croque monsieur brunch bake!) with a few additions – cherry tomatoes and a bit of onion and mustard – but you could easily make this more ‘breakfast-y’ by adding cooked sausage or bacon.

I’ll leave you with one more little tip. Cook your bake until it’s nice and browned and crispy on top. First time, I under baked and there were a few gloopy bits inside. Not so great. You want to bake until the egg and milk mixture soaked into the bread has solidified to a bread pudding-like consistency. Yum.

Print
Easily make the classic French ham and cheese sandwich for a crown of brunch eaters with this croque monsieur breakfast casserole.
Author: Helen Buxton
Recipe Type: Main, Breakfast
Cuisine: French-Inspired
Serves: 4 servings
Ingredients
Instructions
Notes
You’ll notice that the amounts in the ingredients list are not exact. That’s because exact amounts don’t really matter – apart from the amount of eggs and milk. This is a very customizable recipe!

It can also be made up a few hours ahead (or even the night before). Just assemble, then cover with foil and keep in the fridge until you're ready to bake.
3.2.2885 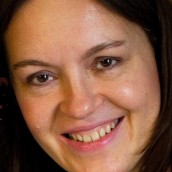 Hi, I'm Helen. I'm originally from the UK but currently live between the UK, Greece and Australia with my husband (it's a long story!) We'll get settled eventually! I love nothing better than to travel the world … and sample the local street food. I absolutely love (attempting to!) put together flavours and fresh ingredients from all over the world – just so long as the recipes are easy peasy to make!