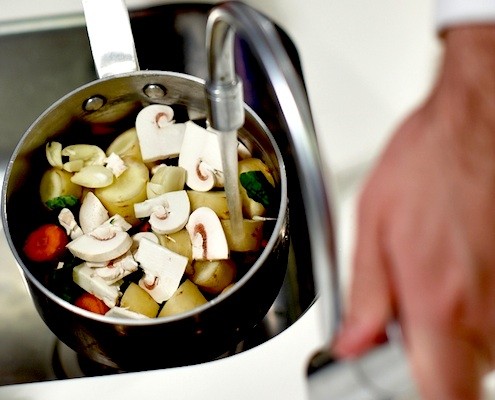 Hate the process of boiling water? Perhaps the Quooker is something for you. Kalle Bergman checks it out.
Text By Kalle Bergman – Photo By Mads Damgaard

During a two-day photo shoot in the HTH test kitchen, and a press-event at CPH Square in Denmark, I had the opportunity to try the Quooker – The Boiling Water Tap. This little thingy looks just like a normal water tap, but with the slightly scary difference that it spews out 212°F (100°C) water straight from the tap in seconds.

The idea behind the product is first and foremost to make your life as a home cook easier. You know that sedating and frustrating task of boiling water? With the Quooker, it’s gone. Forever.

I was told that I shouldn’t be worried about being severely burned even if I held my hand directly underneath the tap – as the water is mixed with bubbles of air and thereby doesn’t harm you as quickly as “solid” water would. Now, I did test it. And yes, it did still hurt. Less than pouring a kettle of hot coffee over yourself, but significantly more than not being burned at all.

How can it be used? The Quooker website states that everything from making a cup of tea to peeling tomatoes and sterilizing baby bottles will be significantly easier with this product, and having tested it I have to agree. Cleaning off a cutting board, boiling vegetables, making instant coffee, and basically anything else that needs hot or boiling water – is all extremely simple with the Quooker. Having overcome the initial intimidating moments, the Quooker quickly becomes something you handle with ease. It helps you keep your kitchen utensils clean and sterile, and the makers of this product also promise that it can actually reduce your costs for heating water. Plus, it is a cool gadget that will definitely give you a good ice breaker for dinner parties where the conversation has run dry.

My question though, is how necessary this thing really is. The investment to get one isn’t unsignificant, and the amount of time you save – even if you spend a lot of your day in the kitchen – isn’t exactly mind-boggling. I mean, boiling water two times a day doesn’t take more than a couple of minutes of your precious time. Yes, it does make your kitchen life a little bit easier, but considering the price tag, there are hundreds of other kitchen gadgets that can also claim the same (just in other areas). So in my mind, it all comes down to your wallet. If you can afford it, and already have all of the other cool gadgets on the market – go get this one as well!

It is not a necessity. But it is a great product.

Getting Your Mango Fix In Bangkok