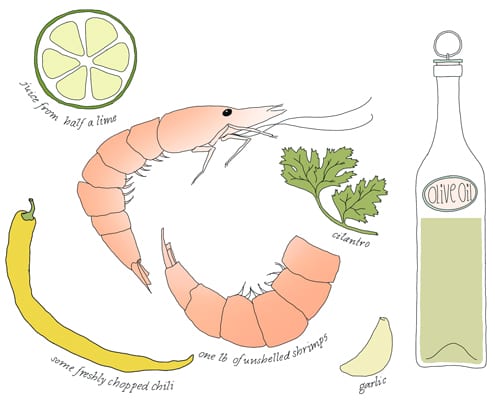 Grilled shrimps spiced with chili, garlic, lime and cilantro are a fantastic start on a successful BBQ evening.
By Johanna Kindvall

Instead of enjoying the Swedish summer by growing vegetables and foraging for berries and mushrooms, I have been stuck with NY’s summer heat. I can’t say it has all been miserable though, it just hasn’t been the same. In Sweden I would have picked wild black cherries instead of gluttonized on local peaches. I would also have picked yellow chanterelles instead of trying to grow my own oyster mushrooms. Its all good as both places have their own unique quality.

I have found it a little hard to be in my kitchen cooking when the city gets too hot and humid. Some nights I end up just eating cold watermelon with feta or something like that. Delicious and simple. Luckily we have had direct access to a really lovely garden so many dinners have been cooked outside on the terrace. Often vegetables such as eggplant, zucchini and field mushrooms (sliced up and simply marinated with herbs, garlic, olive oil and tamari) served together with steak, just barely grilled and thinly sliced.Other specialties are BBQ’d mussels and shrimps (see below). The mussels can be BBQ’d as is and eaten with squeezed lemon. You can also precook them and grill them topped with garlic butter and breadcrumbs.