These latkes have a delicious Greek twist – packed with feta, spinach, and topped with tzatziki.
By Kim Hamill 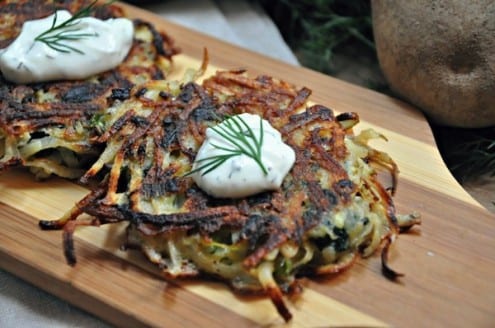 I’m not good about working out. I generally lack the discipline and motivation and, instead, I get a random burst of get-my-butt-to-the-gym inspiration, also known as shoot-my-butt-doesn’t-fit-in-my-pants inspiration. Last week, I was a gym rat. Okay, I went three times but that’s pretty impressive, don’t you think?

Recently, I also tested out a new latke recipe. They have a delicious Greek twist – packed with feta, spinach, and topped with tzatziki. And if you do three workout classes in the same week you make them you can have as many as you want. And, I did.