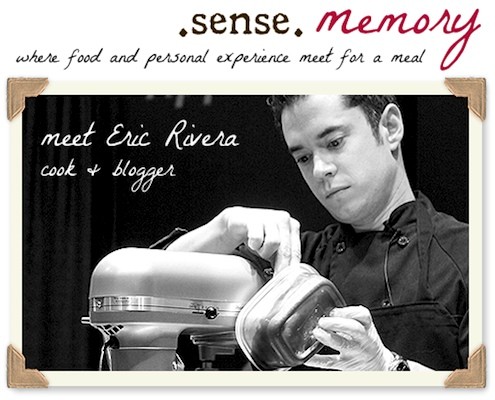 Denise Sakaki meets food blogger and cook Eric Rivera, and talks about his upcoming internship at the best restaurant in the world. Among other things.
By Denise Sakaki

Living life at 40,000 BTUs according to his widely-read blog, EricRiveraCooks.com, Eric Rivera is an epicurean force to be reckoned with, as both a culinary student, well-known blogger and a successful working cook. Born and raised in Washington State with a family from Puerto Rico, Rivera’s cooking style and blog perfectly combine the personalization of food through family and the appreciation for fresh, local ingredients.

Rivera currently works at Blueacre Seafood in downtown Seattle, but with an upcoming internship at the famed Noma restaurant in Copenhagen, Denmark, he is poised for one of his greatest adventures yet. But before he leaves the States, he shared some of his thoughts on the ingredients he’ll miss, the great influences of his life, and oh yes… clear fortune cookies.

Who was the most influential person who defined the way you approach food?
My grandpa. I used to go to Puerto Rico during the summers and visit my grandparents and they always used to make food priority #1. If we were going to go north to San Juan for the day, then my grandpa would make sandwiches, have coffee in a Thermos, and we would still stop halfway through the mountains in order to eat. He always talked about food like it was never going to be there again or we were going to run out. The funny thing is that he would cook and cook and cook and you would never see him eat, sure he would taste things but you would never see him grab a plate and eat. I realize that I do the same thing now.

Another thing he would do is always make food in excess with the hopes that someone would just randomly show up and eat. I think this is a thing that is very typical of Puerto Ricans in general. When my wife, Mindy, and I went to visit Puerto Rico about two years ago to hang out with my parents, we must have been eating 5-6 meals a day. You go visit someone and the first thing they ask is, “Are you hungry?” and they just disappear in the kitchen for a few minutes and out comes a full meal. How do I not weigh 400 pounds? No idea.

How would you like your food to influence people or change their attitudes towards food?
I don’t want my food to influence or change anything. Cooking has been happening for thousands of years and there is nothing new that I can bring to the table. I’ve learned that over the past year with my own cooking and it’s a humbling feeling. The only thing that I can do different is push my plating to a different level. I can’t stand when people say cooking is easy because it’s not. I stress out about what my next meal will be and what ingredients are going to be in it and how I’m going to cook it. These are all nice problems to have! One habit that I want people to not worry about when it comes to food is time. I don’t know where time constraints came from in a kitchen at home. Nothing has to happen in thirty minutes.

In March, you’ll be embarking on an adventure in Europe, interning at Noma in Denmark – what ingredients from home will you miss the most?
I think the best thing about cooking for a living is that it doesn’t matter what part of the world you’re in; if you want to eat something you can make it for yourself. The big problem I have is that I’m not sure if they have Sriracha over there. I might have to smuggle some in my bag. Still haven’t figured out how to make that stuff and it’s so good.

What do you look forward to eating and/or cooking during your internship?
I really want to learn….anything. There is so much to learn from the crew at Noma. I have their cookbook and had a chance to meet Chef Redzepi when he was in Seattle and even from the hour or so I was in his presence and the many times I’ve read the book, I know that anything/everything I see there is going to be amazing and life changing.

Another thing I want to do is forage for items that will end up on the menu. They send their cooks and chefs to locations in the morning to look for food and then they come back to the restaurant and work on the menu. I think that is the coolest idea ever.

What’s the one surprising ingredient you dislike?
Milk. I’ve never liked the stuff and that’s pretty crazy, I know, but I think if you check out my blog you can see I rarely use milk in recipes. I think the last time I drank milk was about 15 years ago. Yes, it’s in butter, I get that, but milk straight-up? No thanks.

What’s your secret indulgence that makes you feel a little guilty for eating?
If it’s something that’s going to mess with my head that bad then I won’t eat it. A couple of weeks ago, Mindy and I were running errands, I was hungry and I said, “Hey, Jack in the Box…let’s just go there.” She knew I was just hungry and didn’t really want that so we went across town to eat at Bakery Nouveau. Duck sandwich [beats] Bacon Jumbo Jack.

If there were a book or reality TV show based on your life, what would it be called?
“Holy S—. is this guy serious!?!: Cooking with Eric Rivera” Still working on the title…but yeah, something like that.

Dinner party of your dreams – who would you want to cook for?
I would like to cook for the people that have inspired me the most in my kitchen by their books and hopefully by working for them all one day: Kevin Davis (Blueacre), David Chang (Momofuku), Heston Blumenthal (Fat Duck), Rene Redzepi (Noma), Brian McCracken and Dana Tough (Spur), Ferran Adria (El Bulli), Michel Bras, Peter Gilmore (Quay), Mindy, and my parents.

The “death row” question – what would be your last meal on earth?
Spam and eggs with a ton of Sriracha.