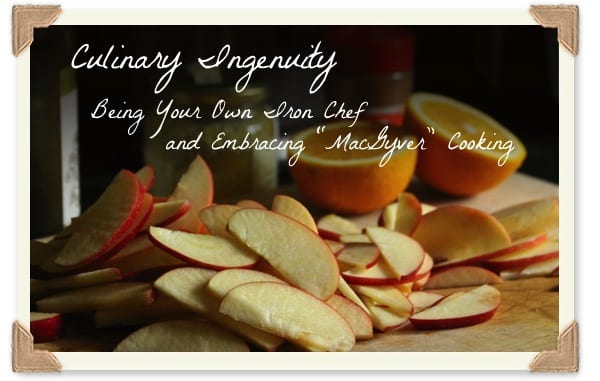 How to Make Pesto in a Flash

Cooking based on what ingredients you have on hand can be a challenge. However, just like on Iron Chef, it can be fun and rewarding to create something new and straying from the traditional recipe plan.
By Denise Sakaki 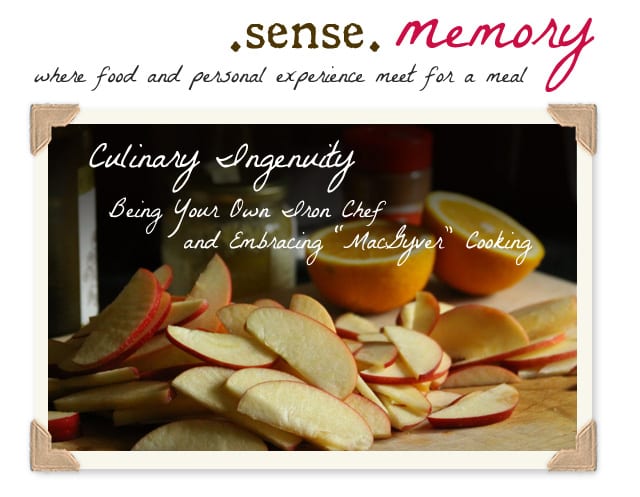 I’m not a big fan of cooking reality television shows with gimmicks, spinning wheels, and inexplicable challenges to make food compelling. But the one game show cooking series I still watch is Iron Chef. I loved watching the original Japanese series, wondering what beautiful, exotic ingredient would surprise the battling chefs, and always being a little sad for the Italian-trained Iron Chef, since the ingredients would almost always benefit traditional Japanese cuisine. Seriously, why did they even have that guy?? I watch the American version of Iron Chef, with its Vegas-like stadium ablaze with spotlights, and roving cameras capturing every glistening drop of pressure-cooked sweat beading on a chef’s brow as they hurriedly prepare gourmet dishes for a panel of pithy judges.

Iron Chef is something I continue to appreciate because, take away the cameras and TV Land fuss, and you’re still left with what matters: a trained chef, ingredients they may not expect, and an incredible zest for culinary ingenuity. The skillset of making-do with what one has so often gets glossed over as chef magic, but it’s something everyone can benefit from. I would never compare the humble dishes from my own kitchen as Iron Chef-worthy; instead, I call it Kitchen MacGyver-ing. I don’t plan meals based on what I want to eat, I cook based on the ingredients on-hand, whether it’s fresh, seasonal items or realizing I’ve clearly over-bought canned goods and Zombie Apocalypse be damned, the pantry needs to get whittled down. I often wonder why more food preparation isn’t focused on stepping away from being a slave to recipes, and in the words of another reality TV show persona, using on-hand ingredients to “make it work.”

One of the best ways of training a mindset towards MacGyver/Iron Chef cooking is having a CSA (Community Supported Agriculture), aka, the delivery of a mix of seasonal produce from local growers, and not always having the luxury of selecting what gets delivered. We’ve used different CSAs, and the range of produce varies based on the farms they work with, but the result is the same — there’s a mysterious box or bag of perishables, and you can almost picture Chairman Kaga flamboyantly revealing the mystery ingredient(s) for your next week of meals. Without a doubt, you’ll be eating more kale than you ever thought your digestive tract could handle, but really, it’s for the best. Aside from not buying produce as often from a market, you learn to anticipate seasonal fruits and vegetables. As for unfamiliar ingredients, the internet, not cookbooks, becomes your best resource. A search engine becomes a culinary oracle, by typing in the base ingredients you have, and seeing how others prepared them. The food blogger culture, combined with massive recipe sites are endless inspiration when you’re faced with a pile of secret ingredients you can’t even identify. Beyond a self-education in preparing new foods, the primary benefit of using a CSA is you’ll ultimately be eating more fruits and vegetables than what you’d typically buy, and while it seems like a lot of produce, it’s the greens your mother always said you should be eating. If nothing else, you’ll adapt your cooking to embrace 100 ways to eat kale and chard.

I talked this style of off-the-cuff cooking with a friend who’s a very accomplished home cook, and always swears by recipes. I’m a terrible recipe-follower, I often go off-script and transform a dish completely by adding a bit of this and a dash of that, often having to fix mistakes as I go along. She said that experimentation is scary, yet she’d like to be more impulsive with new ingredients, which brought up a really good point: it’s not that no one wants to be an Iron Chef in their own home, it’s the fear of ruining a meal. That’s a valid concern – I’ve had many ill-conceived meals that were thrown together and quite nearly thrown out. But maybe that’s the goal, to neutralize the fear of making a bad meal and learning tricks to fix dishes that didn’t turn out as expected. I’ve made “everything” vegetable stews that look like a terrifying swampy mess, but throwing it into a blender with some cream and butter, and you’ve got a velvety soup. Food is enjoyed with the eyes as much as the tastebuds – I’ve learned to keep an ample supply of turmeric, the bright yellow spice powder typically used in Indian and Mediterranean cooking, or scarlet-hued sweet paprika, to add a concentrated shot of color in a lackluster, pale dish. Trying different regional cuisines and playing with spices can help save a failing dish. I’ve added Japanese rice wine vinegar to add brightness to a dull-seasoned Italian stew, and used Italian balsamic vinegar to an Asian stir fry, as a substitute for Chinese aged black vinegar. It’s all minor challenges that would never see the light of day on a cooking reality show, but when you’re experimenting as you go, and create something delicious from random ingredients, it definitely makes you feel a little like an Iron Chef.