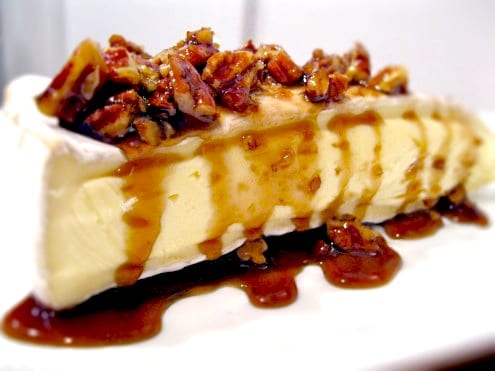 A Folly Cove Rum-inspired brie topped with maple syrup, pecans and brown sugar. A sweet, savory appetizer with a kick.
By Kara and Marni Powers

When trimming the tree, we like to setup a cheese board on our coffee table that people can grab while focusing on the activity at hand. For a festive update on the classic cheese and cracker platter,  we were inspired to add a sweet topping with a twist.  After sampling Ryan & Wood’s Folly Cove Rum up in historic Gloucester, MA, our minds churned with ideas of how we could use this dark, robust flavor in cooking. Like the distillery, we decided to tie in New England influences to create a rum-inspired brie topping by incorporated Vermont maple syrup, brown sugar and mixed nuts.