A specialty from the south of the Netherlands: A sweet yeasted pie base filled with lovely smooth and creamy custard topped with crunchy streusel.
By Ena Scheerstra

This pudding streusel pie is a variety of ‘vlaai’, a specialty of the Dutch province of Limburg. Vlaai goes a long time back: Germanic people baked their bread on a hot stone and poured honey or fruit juice on top to make it more tasty, this was called ‘vlade’. Later on in German history vlaai was baked in monasteries as sacrificial bread. Probably it were merchants that traded both in Limburg and at the other side of the border in Germany that took vlaai from Germany to Limburg, where they started to bake vlaai for special occasions: birthdays, weddings and the twice a year fair (these were combined with a procession and a mass).

For a real vlaai you have to start with the tin. Officially a vlaai should be baked in a smooth, shallow pie tin with a diameter of 28-30 cm. Since I used a scalloped pie tin, my pie officially cannot be named vlaai. However, I think it is useless to buy yet another baking tin, because the scalloped pie tin works fine, the vlaai will not taste any different.
Then the base. There are many recipes out there that use a simple sweet crust, but for a real vlaai you use a sweet yeasted dough base, otherwise it is just a pie and not a vlaai. I guess people use a sweet crust because they are afraid a yeast crust is very difficult to make, but actually I find that it is easier than a sweet crust.

Then the filling Traditionally you can fill a vlaai with rice pudding and leave the top open, fill it with fruit (apricots, plums, cherries) and top with a lattice, or fill with pudding or apples and top with streusel. Nowadays most bakeries have other flavours as well, and there even are bakeries that specialize in vlaai and fill them with about anything you can think of. A ‘Limburgse vlaai’ is always baked completely with filling and topping, a vlaai base baked first and then filled with a mousse or something like that is just called a vlaai.
I like the traditional flavours, so I chose to make a streusel pudding vlaai (in Dutch ‘kruimelvlaai’ or ‘puddingkruimelvlaai’). The combination of the soft, slightly chewy vlaai base, a lovely creamy and smooth pudding filling and crunchy streusel on top is just delicious. Unfortunately, the ones you buy in the shops often have a rubbery pudding filling and soggy crumbs on top. Freshly baked, the crumbs of this vlaai are nice and crisp (bake it a maximum of 1 day in advance). If you look at the picture, my pudding seems very stiff, which makes it easy to cut (no oozing and sticking), but tastes like a very soft pudding that melts in the mouth. So give this delicious pastry a try, or choose on of the other fillings/toppings (see notes of the recipe below).

Generally a vlaai is cut into 12 portions, since it is a large pie you might divide it into 16 portions. Lots of people from Limburg consider this a frugal habit and cut a vlaai in 6-8 portions. On special occasions (birthdays, weddings, parties etc.) they buy or bake different flavours of vlaai and sometimes they eat 2, 3 or even 4 portions per person (I would like this habit in my part of the country!). You can serve a vlaai portion on a plate with a fork, but since a piece is quite sturdy and easy to pick up, it is often eaten without. 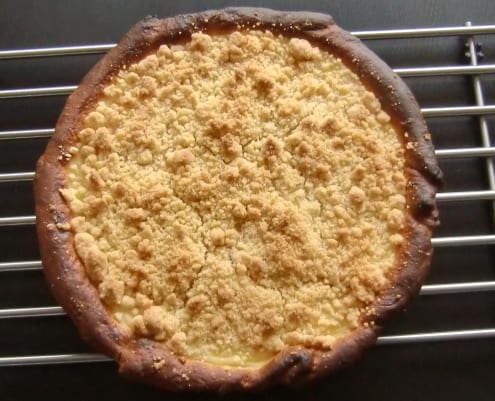 Print
Prep Time
20 mins
Cook Time
45 mins
Total Time
1 hour 5 mins
A sweet yeasted pie base filled with lovely smooth and creamy custard and topped with crunchy streusel.
Author: Ena Scheerstra
Recipe Type: Baking
Cuisine: Dutch
Serves: 6-16
Ingredients
Base
Filling
Streusel
Instructions
Notes
For a vlaai with a lattice top: make 1.5 times the dough recipe. For an apricot vlaai: soak 200 gram dried apricots in cold water for 8 hours. Cook the apricots 15 minutes with 75 ml of the soaking water, 35 gram sugar and 1 tsp grated lemon zest. Leave to cool and drain. Spread over the vlaai base and sprinkle with 15 gram sugar. Cover with a lattice and bake 30 minutes at 225C. For a rice vlaai: bring 750 ml milk to the boil with the zest of half a lemon and a pinch of salt. Add 150 gram pudding rice, stir well and cook for 45 minutes on very low heat, stirring regularly. Remove the lemon zest, add 75 gram sugar and 25 gram butter. Mix in a bowl an egg yolk with a few spoons of the hot rice pudding, then stir it through the rest of the rice pudding. Whip 1 egg white till stiff peaks and fold through the rice pudding. Spoon the rice pudding in the vlaai base and smooth it. Bake at 200 C for 45 minutes; when the top gets to dark, cover it with some aluminum foil. If you want to you can garnish the vlaai with whipped cream and chocolate curls. For a cherry or plum vlaai: spread 350 gram cherries or plums (stones removed!) over de vlaai base. Sprinkle with 50 gram sugar. Cover with a lattice and bake 30 minutes at 225C. For an apple vlaai: spread 350 gram apple cubes over the vlaai base. Sprinkle with 50 gram sugar and some cinnamon. Some people also add some raisins, or use a very thick/dry apple compote. Top with streusel and bake 45 minutes at 200C, covering the top with aluminum foil if it gets too dark.
3.2.1230