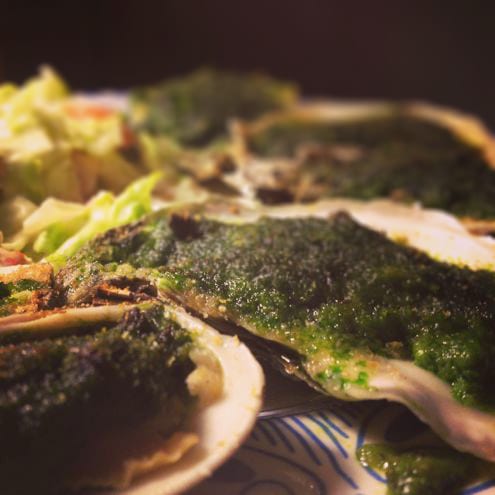 Briny, rich and delicious – According to The Food Lover’s Companion, oysters Rockefeller, or “Huitres en coquille a la Rockefeller,” was first created at Antoine’s restaurant in New Orleans in the late 1890’s. The sauce was so rich that it was named after John D. Rockefeller.
By Marissa Sertich

The original recipe is a mystery and full of culinary lore. The owner of Antoine’s demanded the recipe remain a secret when he was on his deathbed and as a result, today, there are many versions and variations. At the most basic form, they are served on the half-shell and topped with a mixture of chopped or pureed greens. There are many different theories of what the original greens might have been. Some sources say the dish includes celery, parsley, green onion, fennel and watercress, while others report the use of spinach. Typically, the dish is presented on a bed of salt, which keeps the oysters from toppling over.

Print
Prep Time
30 mins
Cook Time
20 mins
Total Time
50 mins
A blast from the past, Oysters Rockefeller is a creation of Jules Alciatore from Antoine's restaurant in New Orleans in the 1890s. It is often dubbed the country's oldest continuously operating family-owned restaurant. Jules is said to have demanded the recipe remain a secret when he was on his deathbed and as a result, today, there are many versions and variations.
Author: Marissa Sertich and Chef Howard Velie, CEC
Recipe Type: Appetizer
Serves: 12
Ingredients
Instructions
2.2.6