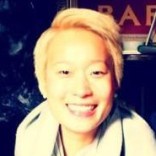 Weekend Reads brings you longform features from Honest Cooking’s first iPad Magazine, which you can download for FREE here 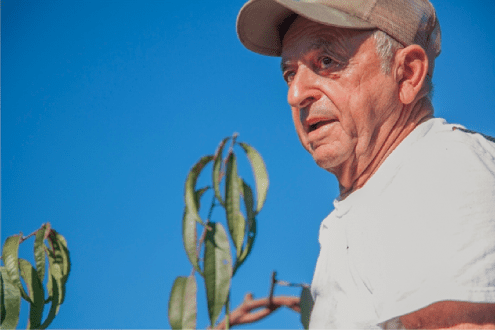 Phil Cosentino sits behind the J&P Fruit stand on Carter Avenue, sandwiched on a sliver of sidewalk adjacent to his orchard. Mr. Cosentino is in his 80s, although you would hardly guess – he’s far too active in the community and on his orchard to be considered geriatric. However his vast knowledge about the city’s past and his fruit proves he’s been around for longer than most.

The 2 acres lined with rows of fruit trees is an anomaly on a typical suburban street and in Santa Clara County as a whole, where since the 1950s virtually every strip of available land has been plucked by developers. Today, a wave of hi-tech businesses stretch from San Francisco sixty miles south through San Jose, eventually ending at the cool coastal redwoods of the Santa Cruz mountains. During my visit on an unusually warm November morning, Mr. Cosentino tells me about his orchard – one of the last active orchards in all of Santa Clara County.

At the turn of the 20th century, the County was a leader in the production of prunes, apricots, pears, cherries, and walnuts. 1 out of 6 individuals depended on the agriculture industry for their livelihood. A 1963 agriculture report calculated a ten-year gross income of 89 million dollars from 125 different crops in the Santa Clara County – an equivalent of 650 million dollars today. The Silicon Valley, known these days as the home to Apple Computers more than apple orchards, was at one time called “The Valley of the Heart’s Delight”.

In the shadows of the fruit stand cast by the bright November sun, Mr. Cosentino reminisces to postwar 1945 when his father, Dominic Cosentino, first brought his family to the Santa Clara Valley. The family settled in the house on Carter Avenue on a 10-acre plot on a sprawling street shared with just three other families. Today, the street is lined with single-story, single-family homes huddled on perfectly divided plots separated by small side yards and tall wooden fences.

Dominic Cosentino hoped to cultivate his 10-acre orchard into a family business. But instead of growing fruit, he opened Cosentino’s Vegetable Haven in 1955 and went into selling it. “He started the grocery because us kids didn’t want to work on the orchard,” says Phil Cosentino, “we were fighting him all the time. We didn’t want to be farmers; it was hard, dirty work. The kids in the modern age, at least what was the modern age at the time…” he pauses and chuckles as he realizes I might be completely unaware of his reference to the 1950’s, “…we didn’t care for it at all”. 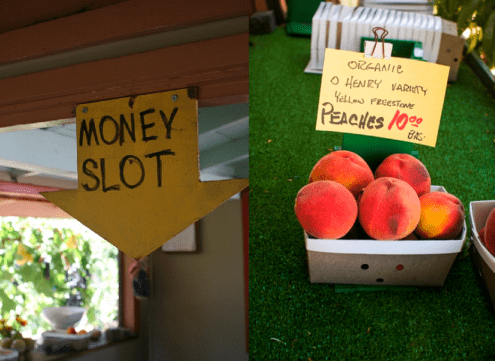 Cosentino’s Vegetable Haven soon became Cosentino Market, followed by the expansion of two more Cosentino Markets in the area. The four Cosentino sons owned and operated all three, with Phil Cosentino overseeing the produce for the stores, “I know quality.” He said to me, as a matter-of-factly.

Phil Cosentino became proprietor of the orchard in 1975, when his three brothers didn’t want any part in keeping up the land. “Each of us had 25%, so I had to buy them out. The land had already been cleared for development, but I decided to keep it going…I would work in the [grocery] stores in the mornings, and come home in the afternoons to work on the orchard”.

In the very beginning, the now 2-acre slice of land overflowing with 100 varieties of fruit was once littered with a mere three crops: apricots, prunes, and wine grapes (4 acres of wine grapes, to be exact). When he first started in the seventies, Mr. Cosentino planted 10 of everything. When a tree would die, he often put something else in its place.

Mr. Cosentino stopped working in the stores in 1995, and went full-time caring for his orchard. These days he works a few hours in the mornings, every day. His season runs from May-September, offering a bounty of berries, apples, figs, plums, prunes, pears, citruses, about 20 different peaches, and more. On his orchard the trees are scattered in rows of 16 to 20. None are labeled, although some have colored ribbons tied around the trunks. I ask him how he knows where everything is. “Oh, well, after I’ve been here all these years…sometimes I forget where a certain tree is, but eventually I find it. I have a pretty good idea where all the different trees are.”

Mr. Cosentino only picks what is ripe, transporting his fruit no more than a hundred yards from tree to stand. His selections are always juicier, plumper, brighter, and more flavorful than any other fruit I try. Luckily, he says, “nothing gets ripe all at once”. An obvious statement, but a good reminder when supermarkets offer 365-day availability of citrus. During my visit, the ‘season’ is technically over but there are still winter fruit to be had: huge, bulging pomegranates and bright, hearty persimmons. There are also tangerines coming in, much to his surprise, and he frets that his regulars might not stop by since there’s typically not an abundance of fruit this time of year. 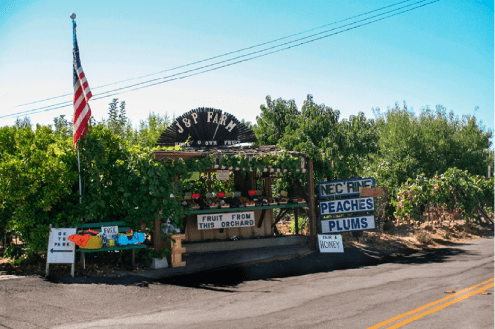 The stand is simple but effective, built by Mr. Cosentino himself for his two daughters in the mid-1970s. It gave them “something to do in the summers”. Eventually, it was his girls’ idea to give farmers’ markets a try. “They thought it would be fun”, Mr. Cosentino said, with the obvious love of a father relenting to the superfluous wants of a daughter (I know this voice; I’ve heard it many times in the permissions granted by my own father). When asked about farmers markets, he is polite, but I can tell he doesn’t think they’re all that great. “We’ve tried it, but it got too political,” he says at first. A moment later he elaborates,

“Down [at a local farmers’ market] I was selling my summer fruit, and that finished, and as soon as the apples started the first Saturday I took my apples down there. Ohhh, they said, you can’t sell apples. But I told them, I have apples now. They said, we have too many apple vendors now. We don’t want too many vendors of the same thing. You can come back next summer with your summer fruit. We never went back.”

Regarding a recent hunt for sweet potatoes, he continues, “they were $2 a pound [at the farmers market]. I could buy them for .75 at Smart&Final. I could buy them at Artie’s, which is already high priced, for $1.49. $2 a pound, ain’t no such thing.” I smiled, as it was appropriate for a man who had sold produce his whole life to be so agitated over these prices – let alone remember the numbers so effortlessly. 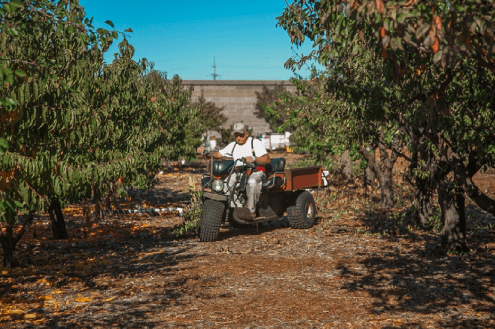 Mr. Cosentino’s passion is evident in his knowledge, which he offers minimally or when prompted. On a subsequent visit to the orchard, I envy his fruiting pomegranate trees as my shoes crunch down on crisp Autumn leaves. He takes a break from pruning to point out that he doesn’t dare pick them until the skins crack. “That’s how you know they’re ripe. Even the farmers markets won’t have them like that” (he says “that’s how you know they’re ripe” probably a dozen more times throughout our conversations).

There are Feijoas, something I’ve never seen in my 30 years of eating California produce. Mr. Cosentino points down to the left, to a tree-like bush. “Look, there’s fruit. You almost can’t see them. They’re green, just like the leaves”. I see small, bud-like fruit clustered in threes and fours. “I wait until they fall on the ground to pick them. They don’t change color, so you only know they’re ripe when they fall. Nature picks them!” He cuts one open for me to taste. A mini guava-like fruit, tropical with flavors of pineapple and a hint of banana. A Jamba Juice smoothie in fruit form. Why had I never tasted this before?!

He walks on, not waiting for me. He points out rose hips, growing on a lattice, saying he’s heard you can use them in cooking but has never tried it himself. His eyes dance as he warns me of his Lady Crabapples, “They’ll fool you. They’re a lot more flavorful than you think!”, then mentions they originated in France. With each fruit, he is able to site provenance, indicators of ripeness, period of dormancy, and when trees tend to fruit. He points out a Spring Crest peach tree, “it’s one of the earliest peaches of the season”. I ask him how he knows all this “Oh, I just know, after working on the orchard all these years.” He falls silent for a moment, then points over to his grape vines with his pair of mechanized shears. “Those out there, they’re going dormant too, just like the trees. I’ll prune those last” 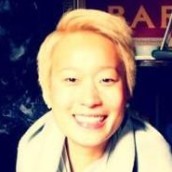