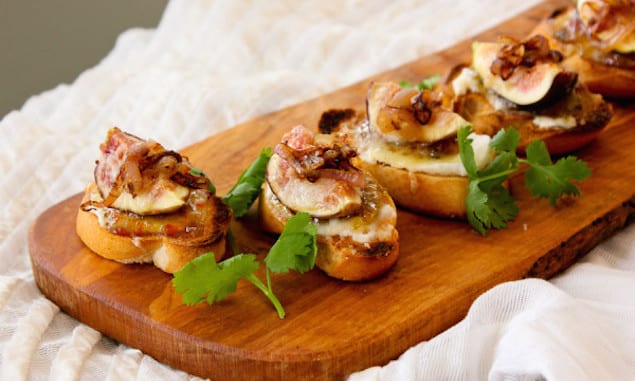 [adrotate banner=”44”] A sweet and savory fig crostini with jalapeño jam and caramelized shallots that tantalizes your tastebuds.
By Priscilla Willis 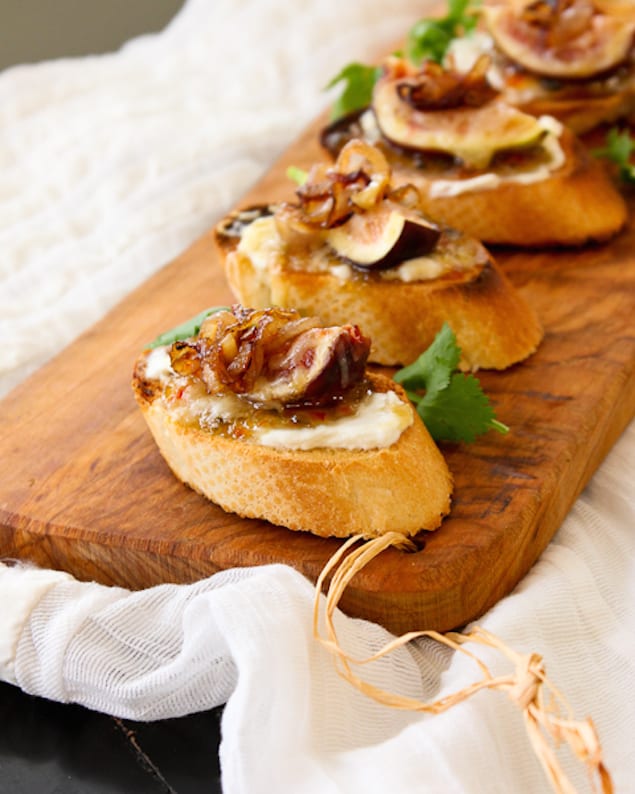 The name Rioja (pronounced ree-OH-ha) can refer to the region (in north central Spain along the Ebro River) or the wine made in that region.

In your wine tasting experiences you may have come across Tempranillo – this is the main grape varietal used to make wine in Rioja. Other grapes – graciano, mazuelo, garnacha – are often blended with tempranillo to make red or rosé wine. I received my Rioja wine 101 education at Potatopalooza, an FBLA (Food Bloggers Los Angeles) event, where the wines of Rioja were paired with all manner of scrumptious potato creations. 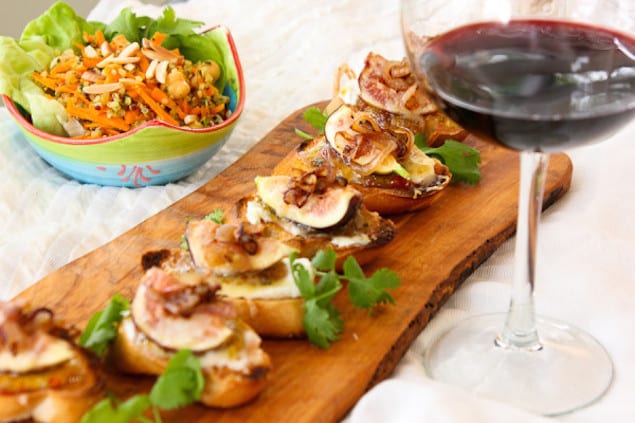 The character of tempranillo is largely shaped by the conditions in which it’s grown – what the French call terroir. Rioja wines can be elegant, subtle, and ethereally light like a great Burgundy; or have the assertive, velvety lushness and minerality of a Columbia Valley Merlot. Most Riojas are red, but there are a number of very quaffable rosés and a broad array of whites produced as well.

I selected a Benjamin Romeo Predicador Rioja 2009 for my little tapas party for two. It was a very reasonable $24.99 at Costco which has become renowned for their wine buying program.

A visual person, I was attracted to the simple image of the dark fedora… and the fact that it was rated 93 by Robert Parker/Wine Advocate. Aged 14-16 months in French oak barrels, the wine has a beautiful scarlet cherry color, with intense aromas of dark juicy fruit, spicy notes along with coffee and smoke. The flavor delivered silky, jammy dark fruit and an elegant, well-balanced acidity with a pleasant minerality in the lingering finish. I was very happy that I had bought two bottles because I’m sure it won’t be there when I return.

Wines from Rioja are unique in their broad compatibility with food. They have the right levels of acidity and subtle flavor that doesn’t overwhelm the flavors of your food. A charcuterie and cheese board is a perfect accompaniment but, unfortunately, is listed under “avoid” if you’re on a low-sodium diet like my husband. No worries, there are many other foods that pair well with Rioja.

For our intimate tête-à-tête tapas, I made a sweet & savory fig crostini with jalapeno jam and caramelized onion. Crusty baguette slices were layered with a light smear of Labne yogurt cheese (very low in sodium) topped with the jalapeno pepper jelly, a plump fresh fig, caramelized onion, and a sprinkle of grated Manchego cheese (sheep’s cheese from Spain). Perfecto!

Fresh butter lettuce cups of carrot salad with quinoa, chickpeas, and almonds rounded out our meal. The fig crostini and Rioja paring was a match made in heaven and I’m sharing the recipe today so you can enjoy it too. Stay tuned for the Carrot, Quinoa Salad, another sweet & savory combination that played well with the Predicador Rioja and was easily the best carrot salad I’ve ever had.