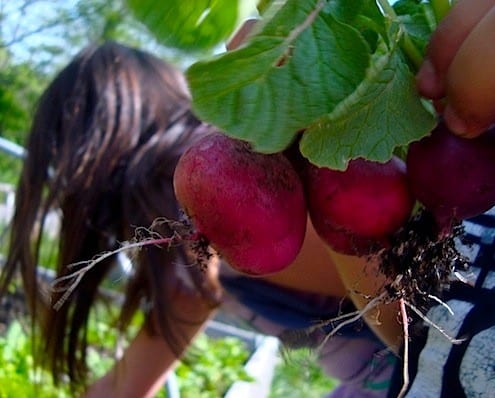 Erin Taylor is as a FoodCorps service member serving in…

A bunch of brave young epicures get their first taste of home grown radishes.
By Erin Taylor

A group from Miss Reilly’s first grade class stood around a raised bed with me. We peered through thick greens at shoulders of red, purple, pink, and white popping out of the soil.  “Do you guys remember which are the Easter Eggs?” I asked. They dutifully pointed at the colorful patch to their left. “Great! And what’s the other kind? Do you remember?”

The kids crowded closer, smushing each other to get the best view. They had planted and cared for these radishes. When they thinned the seedlings so each root had enough space to grow, some kids had tasted the sprouts. But those tiny leaves had only been the teaser. On a cloudless Friday afternoon they were about to claim the real prize.

I showed the young gardeners how to pull each radish from the base of the leaves and shake the dirt from the taproot. Some yanked out the first two plants they could reach. Others were more selective. “That one’s too prickly,” explained Jayden as she withdrew her hand from a Cherry Belle.

“I’m looking for a yellow one,” confided Galvin. I nodded, wishing him luck.

“Do we get to eat them?” Leo’s eyes were wide. He held up a purple Easter Egg the size of a tennis ball and color of a Japanese eggplant.

“I heard that you’ve been practicing your adjectives,” I told them back in the classroom. Miss Reilly and I had planned for the kids to taste raw and stir fried radishes and fresh lettuce from their school garden. She handed out worksheets with columns for each sample and instructed her students to use creative adjectives to describe the foods.

“If you’re nervous about tasting it,” she offered, “which other senses could you use to come up with some describing words?”

“You could use your eyes?” whispered Bryan.

Justice raised her hand, “maybe you could touch it?”

Miss Reilly served the lettuce while I became a prep cook for ten minutes– washing, chopping, and stir-frying in the back of the room. She made sure students had written at least three adjectives about one veggie before we served them the next. Kids filled their lettuce columns with words ranging from the objective– “green,” and “wet,” — to the editorialized–  “good,” “delishus,” and “tastes bad”.  Austin requested seconds. Alyssa asked if she could have the rest. Others gave a polite “no thank you.”

The kids overwhelmingly labeled the raw radishes “spicy”.  Brave young epicures proudly displayed the corners that they had dared to nibble. Leo told me that “it tasted gross, but I tried it anyway.” I didn’t tell him that I don’t particularly like radishes either. A few kids asked for “another cold one”. Happy to serve up “another cold one” as long as it referred to a vegetable, I morphed from prep cook to waitress and made my rounds with seconds.

When Miss Reilly and I brought out the cooked radishes, even those whose tongues still stung from the raw version allowed a second chance for the roots they had raised from tiny seeds.  Not everyone enjoyed the “warm ones,” but Jayden gobbled down her piece before it even touched her desk. Fortunately the harvest was so bountiful that those who wanted more could have seconds and even thirds of the “sweet”, “perpul” fruits of the class’s labor.

While the kids took advantage of a few precious minutes of playtime at the end of the day, I asked Miss Reilly what she wanted to do with the rainbow of leftovers.  “We could send them home,” I suggested.

“Perfect” she said, “I have some baggies.”

The afternoon bell rang just as I zip-locked the last bag. When Jackson’s mom walked into the classroom to pick him up he yelled to her over his rambunctious classmates. “Mom, look what we get to take home!” Jackson waved his radishes, coming dangerously close to smacking his poor mother in the face. “Can we eat them in our dinner?”

*Subjects’ names have been changed

Erin Taylor is as a FoodCorps service member serving in Massachusetts. She coordinates a school garden where she gets to hang out with kids in classrooms, the garden, and the cafeteria, and talk to them about growing, cooking, eating, and appreciating food. Erin has grown food on a farm, in the bed of a pickup truck, at an overnight camp, and next to her neighbor's driveway. She has prepared and served food in coffee shops, restaurants, dining halls, and her own kitchen.

Cooking the Magazines: Chicken with Kale and Freekeh-Lentil Pilaf