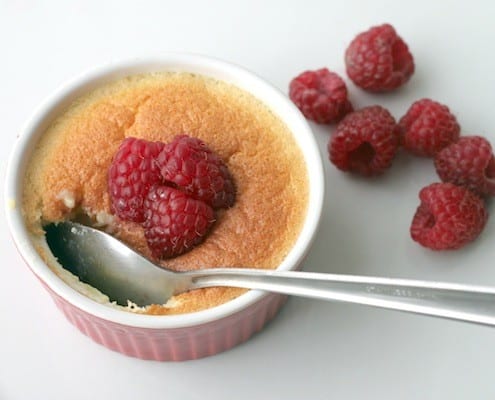 A combination of lychee, rose, and raspberry in a light, fluffy pudding cake.
By Amrita Rawat

One of my favorite pastry chefs is Pierre Hermé, the Frenchman who lifted the macaron to new heights with unique and inspired flavor combinations. Hailed as the Picasso of pâtissiers, Hermé created the Ispahan – a delicate combination of rose, raspberries and lychees – and put it in macaron form for Ladurée (the oldest macaron bakery in Paris). Hermé continues to experiment with these flavors in ice creams and other pastries.

I wanted to try to make my own unique version of an Ispahan dessert that would be unlike any other. I’ve recently been enamored with the idea of a pudding cake. There’s something wonderful about having a soft cake on top with warm pudding on the bottom. When I recently made a lemon pudding cake, all I could think about was how to adapt it to an Ispahan flavor. Although the lemon tones were delicious, the cake was very strong and better suited for the summer months. I wanted something a bit more delicate and refined, perhaps a cake that would make a great Valentine’s Day dessert.

After several attempts, I came up with this recipe. The result is a very soft rose-scented cake with bits of lychee in the pudding on the bottom. The raspberries on top are the perfect complement to the rose and lychee notes. I also reduced the sugar in the overall recipe to allow the fruit flavors to shine.

Although I added just a few raspberries on top of each ramekin simply for aesthetics, my friends added several more afterwards, just because the combination was so delightful.
A side note: I used canned lychees for this and generally find them to be just as delicious as fresh lychees. If you can get your hands on fresh lychees, though, by all means use them.

Our 20 Favorite Rosés for End of Summer