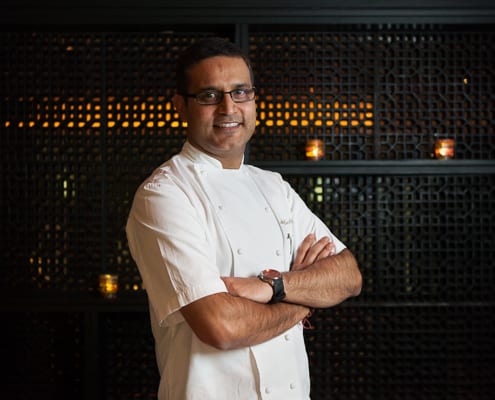 Atul Kochhar is an Indian born, British based chef and is widely acclaimed for his take on modern Indian cuisine. Reena Pastakia visited him in his restaurant Benares to understand more about his career to date, his plans for the future and to get some cooking tips.
By Reena Pastakia

How did your love for food start?

My love for food started very early in life.  My father used to run a catering business.  I saw it all happening in front of my eyes from the time I was born and so it was easy to get sucked in.  I decided rather than taking the normal traditional routes of becoming a doctor, accountant or engineer I’d follow the food route.

Would you encourage your children to go into the industry?

I was never encouraged; Cooking was a passion that came to me and I would like them to find a passion. Perhaps that has what has made me a better chef.  I still wake up every morning with great thoughts about what I’m going to do.  I’m excited about my work and I want my kids to be excited about whatever they do in life.  My father used to say that if you want to be useless be useless with passion otherwise it’s utterly useless!  That’s what I want to tell my kids.

You have revolutionized Indian food and made it more contemporary.  Was that always your aim?

I always thought that Indian food could be different but it was my upbringing that influenced my style; I was born into a Punjabi family, brought up in Calcutta and studied in South India.  Everything was jumbled up in my mind.  I wanted to use Punjabi ingredients, apply South Indian seasoning to it and present it to Bengalis. I think of it as unity and diversity which is the motto of India. When I lived in East India I was a Punjabi boy, when I went to South India I was a North Indian boy and when I went back to North India I had picked up a strong South Indian accent and so I suddenly became a Madrasi. I had to come out of India to become an Indian and here I could express the way I see my country, my ethos, my beliefs and that is a mix of everything.  My food has evolved and will keep evolving because that’s the way I love it – the flavours of India, the ingredients of the UK, the techniques of the world and there is nothing wrong with that.

What do you consider your signature dish?

I would normally say that I haven’t made it yet!  But there is a John Dory that I marinate with a herb paste made of mint, coriander, ginger and garlic.  It is pan fried and then finished in the oven.  I sprinkle fresh tomatoes with spices and roast them before serving them with the fish.  It works really well.

I used all of my crowns at Taste of London at the Benares stall.  My favourite dish was your grilled lamb chops with mint chutney – what is the secret to them being so tender and the flavour permeating through the meat?

We weren’t that expensive!  The secret to keeping the lamb chops tender is the right ingredient – the quality of the lamb chops.  I am not a magician the only thing I have is a passion for good quality ingredients and that’s what I always use.  We were using the best of British, prime, spring-time lamb.  They were marinated for a very short time as it was kid lamb which is very tender and it doesn’t need a lot to break down the muscle.  If I had used mutton chops it would be a totally different story altogether as it is a much tougher meat.  It doesn’t need that kind of marinade or cooking – you need to really braise them.  So understanding of the meat, produce, where it is coming from, which part of the animal it is coming from, what you need with it, which flavours will go with it, what technique of cooking will work – these are the things which we need to learn when Indian cooking.

Indian households are restrictive in the meats they use.  Did you use a variety of meats when you trained in restaurants in India?

I worked with Oberoi Hotels which are among the best hotels in the world so I had the liberty of using different kinds of meat.  But you are absolutely right but that is because of the economics and eating ethos of India; a lot of people are vegetarian.  Also over hunting and over killing of birds and animals has restricted as well for example partridge is extinct in India due to overhunting in the past. This country has got all these ingredients and an educated approach to what you should use and how much you should use.  Hence I use whatever is available to me.  Using local food has always been my mantra.  England is my local now and so I use all the local produce be it turkey, guinea fowl, quail or courgette flowers.

When you were invited to cook for Prince Charles at St James’s Palace, what was on the menu?

It was a five course meal.  The starter was assorted kebabs and the main course was chicken supreme.  The breast of chicken was filled with mild mushroom puree and served on a bed of Kashmiri pillau made with grapes and raisins along with five different accompaniments.  It was a gala dinner that went very well.

What has been the highlight of your career to date?

The highlight has been achieving a Michelin star for Indian food.  That has been the biggest high of my life let alone my career!  I always thought that Michelin stars were for Europeans and only French and English chefs would get them.  So I used to look at them from a distance and admire them.  When I was given a star I couldn’t believe it for days.

With restaurants in London, Dublin and on a cruise ship, how do you manage your time?

It’s the same mantra: Good training, good staff and consistency in the product.  That’s what we try to achieve wherever we are.  I get on with the cooking and I let the rest of the team get on with their work.

Indian cuisine varies wildly by region.  Which region’s food is your favourite and why?

I haven’t found one yet.  I’m still exploring.  I’m a greedy person and so I love each and every region.  I’m a fusion person and I like to mix up everything.

What are your plans for the future?

I don’t have a crystal ball!  I don’t know!  I live by the day.  I’m a person who plans my diary for the next two or three months and don’t look beyond it.  It’s pointless as the world changes so fast these days.

Which is your favourite non-Indian cuisine?

I love Thai food.  I am hooked on spices and so that could be the reason.

Where would you go for a curry with your friends after a few beers on a Friday night?

Busaba Eathai – especially if I am paying as it is cheap and the food is great!  If it is an Indian curry I would prefer to cook it myself.  I wouldn’t bother any of my fellow restaurants by taking my half drunk friends there – I would rather keep them home in my garden!

Do you distinguish between Indian and Pakistani food?

It’s hard to distinguish because pre 1947 what was Pakistani food?  I still lump them together – one border doesn’t do anything for me and the same goes for Bangladeshi food.  Yes it is regional food but if I go to break down regional food there are five or six regional foods within Pakistan!  So I would keep them under one flag – it suits me well.

Who is the main cook at home – you or your wife?

It is Deepti my wife and it’s the best way to keep it.