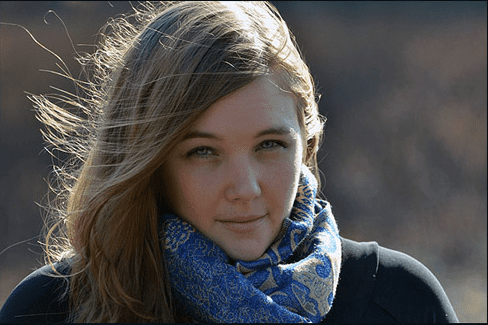 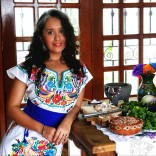 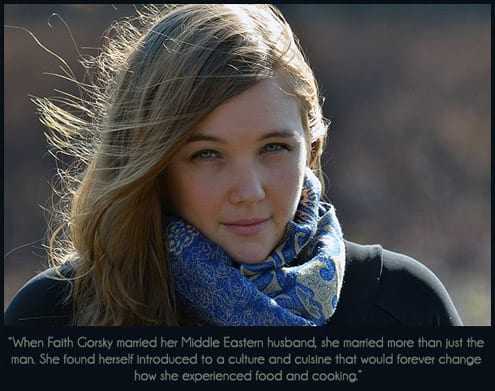 Today we have a special guest joining us, cookbook author and blogger Faith Gorsky. Faith has written a mouthwatering cookbook called An Edible Mosaic: Middle Eastern Fare with Extraordinary Flair. She is joining us today to share a little bit about her new cookbook.

Describe your cookbook to us, what should readers expect?

The book has over 100 authentic Middle Eastern recipes (along with photos taken by me), 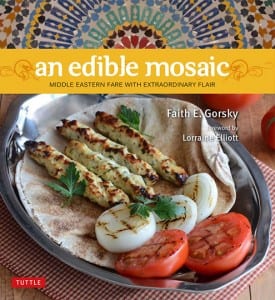 that are streamlined just a bit for the way we cook today. The recipes were mostly taught to me by my wonderful mother-in-law, Sahar, during the time I spent in the Middle East after marrying. If you’re like me and you enjoy Middle Eastern food but didn’t grow up learning how to cook it, I explain things in an approachable way with easy-to-follow cooking techniques – so this book is for you.

I also de-mystify a few exotic ingredients, cooking tools, and cooking techniques. And because cuisine and culture are so closely intertwined, I include a bit of Middle Eastern culture in the cookbook.

Both your cookbook and blog are named “An Edible Mosaic”, is there a story behind the name?

When I was in the Middle East, the craftsmanship there impressed and astonished me time and time again. Here in the U.S., many of the items we purchase were mass-manufactured in other countries; in Syria, they take pride in each item they make, and they make it the same way it’s been made for hundreds of years. The craftsmanship of mosaic in particular has always taken my breath away.

When I got back to the U.S. after visiting the Middle East for the first time,the word “mosaic” stuck out in my mind as a lovely description of food. Since a mosaic is a bunch of different small pieces that fit together, I saw it reflected in my cooking. I was cooking the Middle Eastern food that I had just learned from my mother-in-law, along with the traditional American food I had grown up with, as well as a few Indian, Mexican, Greek, and French dishes I’d been taught by friends along the way. As different as everything was, it came together seamlessly.

When I originally started by blog in May 2009, I was blogging under the name Thought 4 Food. I knew this title wasn’t the best reflection of my cooking and my food philosophy, but I wasn’t quite sure what to change my blog name to. Then one morning I had my answer…I literally dreamt of my blog title, An Edible Mosaic: Everyday Fare with Extraordinary Flair. Giving my cookbook the same name was a natural fit.

When did your passion for cooking begin?

I first noticed my passion for quality food back in high school, thanks in large part to my high school French teacher! I was a member of the French Club, and we met after school once a month to enjoy a French feast. Sometimes we cooked together and sometimes each student brought in a dish to share, but with dishes like Coq au Vin, Boeuf Bourguignon, and Crepes Suzette, I had no choice but to fall in love with good food.

In the book you mention learning to cook Middle Eastern foods from your mother-in-law Sahar. You also state that, “…The only way to learn how to cook from authentic old world cooks is to watch them in action. Nothing is written down… and certainly no measurements.” I’m sure Sahar is excited to see your family’s recipes put to paper and must be so proud of you too. Has she seen your cookbook and what was her reaction?

She is so proud! She treats me as though I’m one of her daughters, and so she is showing and telling everyone and beaming with pride. For me, this is incredibly humbling.

What was it like watching Sahar in her kitchen and cooking alongside her?

Watching Sahar in the kitchen is always like watching a well-rehearsed ballet. Every step is choreographed, and she moves freely around the kitchen with the grace and elegance of an experienced dancer. It is enlightening for me.

Which was the first Mid-East dish that you mastered? And can you tell us how you felt upon biting into it?

Fried Kibbeh (page 100). My mother-in-law loves to tell the story of when she first showed me how to make this dish…she and I were working in the living room at a coffee table as we shaped the kibbeh, relaxed and chatting happily as best we could – remember, she speaks Arabic and I speak English, and although we both know a little of the other’s language, it is oftentimes a challenge, but surprisingly we understand each other more than you might think! She formed one perfect torpedo-shaped kibbeh and after I saw her shape the first one, I joined right in. Of course my kibbeh wasn’t nearly as perfect looking as hers, but I soon improved and she said I was able to make kibbeh after seeing it made only once, which is something no one else that she has taught has been able to do. Here’s how she describes it: “I’ve tried to teach many Arabic women how to make Kibbeh Mekliyeh; it takes several times before they can do it, and some never even master it. Faith saw me make it once and the next time she made it herself. As we say in
Arabic, laha nefus ala el ekel (literally meaning, she has breath that is good for food, which means she has a deep passion for cooking).”

It was an incredible feeling that night when we sat down to dinner and my mother-in-law pointed out to the family the kibbeh that I had made.

Sense Memory: Tales of the Bartender

There are so many great recipes in the book. Which one is your favorite or the one you cook most often?

This is a hard question because I cook so many of these recipes so often. If I had to choose just one, it would have to be Lentil and Bulgur Pilaf with Caramelized Onion (page 82). Mike asks for this recipe at least once a week, and I’m glad he does because it’s a favorite of both of ours. At the end of the week when we’re not sure what to make for dinner, this is always our go-to meal. It looks like a simple vegetarian dish, but the flavors come together so perfectly making it completely addictive. Not to mention it’s healthy, vegetarian, and cheap!

What recipe, or dish, would you recommend to someone cooking Middle Eastern cuisine for the first time?

Chicken Shawarma (page 92)! (Or if they’re vegetarian, Lentil and Bulgur Pilaf with Caramelized Onion that I mentioned above.) If someone isn’t sure whether they like Middle Eastern food and you want to win them over, shawarma is the way to go and will convert even the pickiest of eaters. It’s basically the Middle Eastern version of fast food – perfectly spiced meat (it could be chicken, lamb, or beef, but chicken is my favorite) that’s crisp outside and tender inside. Normally it’s made with a vertical rotisserie, but I came up with a special method for making it at home without any special equipment. And my hubby says it’s even better than the shawarma he used to get back home in the Middle East.

If you could only use three words to describe Mid-East cuisine what would they be?

What did you enjoy most about writing your cookbook?

What I enjoyed most about writing my cookbook is the opportunity it gave me to delve into my husband’s cuisine and culture. When I make Middle Eastern food for my hubby, it brings the familiarity of the Middle East to him here in the U.S., which is comforting to both of us. And this book not only brought me closer to him, but also closer to my mother-in-law, father-in-law, and my hubby’s siblings. We are all united by a common love for the Middle East, and when they see the deep passion I have for their cuisine and culture, they are filled with joy…and the cycle continues because for me, there is nothing more rewarding.

The cookbook is available worldwide at bookstores and online at Amazon and Barnes & Noble. 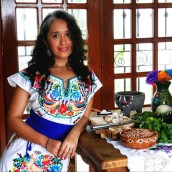