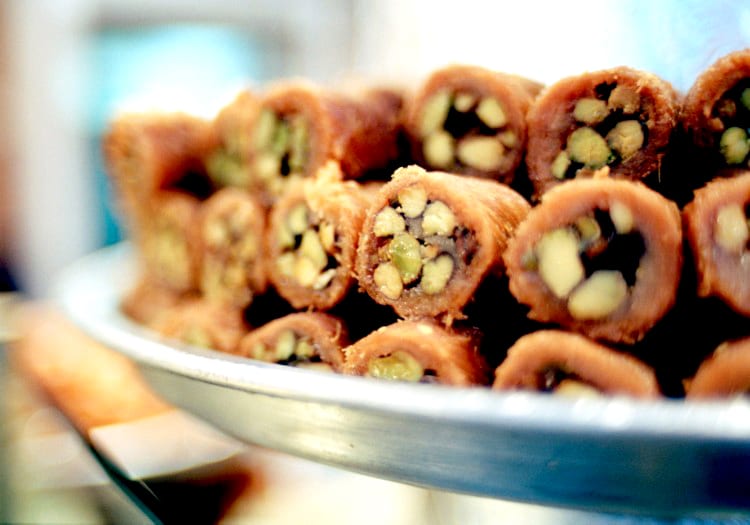 If you go to Stockholm, Malmö or any other Swedish city, you’re far more likely to find pizza and kebab than “traditional Swedish” foods.
By Sarah Clyne Sundberg

Palestinian and Lebanese immigrants have popularized kebab (a.k.a. shawarma) to the point where it has all but outdone the hot dog as street food. “Because kebab was brought to Sweden by Levantine immigrants it’s more of a Levantine kebab with red hot sauce and garlicky yogurt, as opposed to the Turkish version, döner, popular in Germany, which comes with dill yogurt. Still, what we know as kebab is rather Swedish. The expected filling, iceberg lettuce, tomato, onions, aren’t necessarily what you’d be served in Amman or Jerusalem” says Jonathan Metzger, Assistant Professor of urban and regional studies at KTH/Royal Institute of Technology, who wrote the Ph.D. thesis I Köttbullslandet (In the Land of Meatballs).

So top-notch kebab abounds in Sweden. And if the proof of acceptance is the step from street food, or ethnic specialty stores, to the standard supermarket, Kebab has made the leap. “Kebab shavings” are so integrated into Swedish culinary culture that they can be found in the supermarket freezer section.

The most successful story of culinary integration in Sweden is pizza. It arrived in Sweden in the 1950s and was thoroughly popularized by the 1970s. The Swedish pizzeria serves a function similar to the local pub in Britain – every town has at least one.

It is tempting to pin this import on Italian immigrants who arrived in the 1950s as guest workers. But it was far more common for pizza parlors to be run by immigrants from former Yugoslavia. “Croatia has a pizza culture of its own. The pies there are more akin to Swedish pizza; heavier with more toppings and cheese than Italian pizza.”

Metzger theorizes the way pizza took hold had to do with the zeitgeist. “Sweden was opening up to the world. It was fashionable to be curious about other cultures.For the first time more people had the opportunity to travel abroad.” The pizza became a symbol of something international, interesting and exotic.

The dish known as pizza in Sweden bears a definite resemblance to its Italian cousin, but is its own animal. Tomato sauce and plenty of cheese are essential. After that anything is possible. Pizza with roast beef and béarnaise sauce and kebab pizza being the most iconically Swedish variants.

So if Swedes eat pizza and kebab more often than they eat pickled herring and meatballs, are there rules for when to eat what?

“The food regarded as typically Swedish is served at national holidays like Christmas, Easter and Midsummer. You’d have to be pretty offbeat to serve something like Ethiopian injera for Midsummer. On the other hand, most people would probably cook something foreign if they wanted to impress friends at a dinner party,” says Metzger.

That said, traditional Swedish fare, husmanskost – the food you find at IKEA, or on a smorgasbord – is making a comeback. Where baby boomers tend to serve quiche, a Greek salad, or perhaps an Italian pasta dish if they wanted to impress guests, highly fashionable young Swedes are part of the global resurgence of rootsy, locavore and artisanal foods. “It has become trendy to serve husmanskost, Metzger says. Some academic friends who had me over for dinner recently impressed me by having spent two days preparing traditional Swedish dill-stewed-meat.”

I’ll Have That To Stay Please: Swedish Coffee Culture