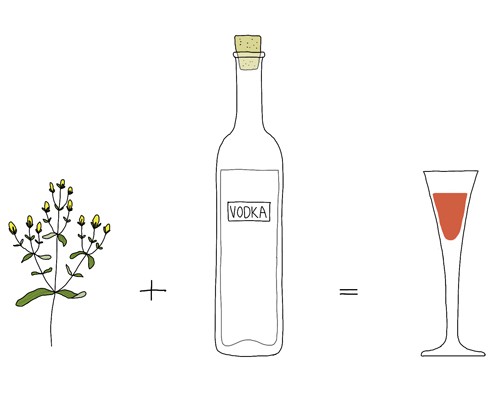 At the end of June or the beginning of July is when St John’s wort starts to bloom. In Sweden, the plant is both common as a perennial in gardens and wild in the woods. I find them every year next to my house on the edge of our gravel road. I pick the flower or rather the buds to soak in vodka. In Sweden we call the spirit Hirkum Pirkum which comes from the Latin name of the plant, Hypericum perforatum.

As I’ve said before, St John’s wort is supposed to heal angst and depression. In the old days it was used to drive spirits away. You just needed to hang some twigs of the herb over an image of the ghost or even the devil and that specific spirit would leave you alone.

For the snaps essence: Pick about two tablespoons of St John’s wort buds (skip the flowers that are in full bloom). Rinse and clean them if neccessary. Put the flowers in a jar or a bottle. Cover with 200 ml vodka and soak for about 8 hours. Strain and add some more vodka if you like (I added about 200 ml). The result is a pink and pretty delicious snaps! (You can soak it longer if you want a sharper taste).

Johanna Kindvall is freelance designer who works with illustrations, graphics and architecture. She loves to cook, eat and draw; a combination she have been sharing on her cooking blog, Kokblog since 2005. Her recipes are more about what you can do, less about how you make them.Johanna is a Swede based in New York City. During the summer she works from her little cottage in the very south of Sweden just an hour from the Danish capital of Copenhagen.