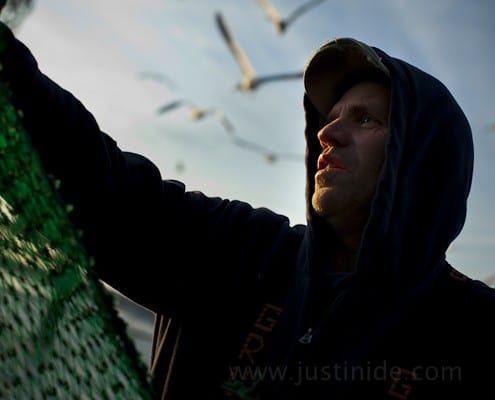 Justin Ide is a veteran photojournalist and former Peace Corps…

There’s been an uptick of Chef chatter on places like Facebook and Twitter about “Maine Shrimp,” and I’ve seen them as a featured ingredient on menus around town.  I didn’t really know what all the hype was about because I didn’t really know what they were talking about, so of course I became intrigued.  After some digging on line I discovered that they are indeed a “local in season” product, and there is a very narrow window to harvest these little guys – and that right now was the time to get them.  I wanted to find out more so I contacted Shrimper Captain Ed Eastman and his wife Carolyn, and Wednesday I spent the day trying to catch pandalus borealis.

Around 1898 Johan Hijort, a Norwegian marine zoologist adapted earlier designs of deep-sea trawls and discovered enormous stocks of pandalus borealis in the North Sea. Subsequently, in the mid 1930?s when Hijort came to the US to get an honorary degree from Harvard, he hypothesized that the deep-sea shrimp would also be found off the New England coast, and after some personal research aboard the vessel Atlantis, he found exactly what he predicted and thus began the U.S. shrimp fishery.

The Maine Shrimp season is short and controlled. This year the local season allows fisherman to be on the water on only Monday’s, Wednesday’s and Friday’s, and after the start of the season on January 2nd it’s only expected to last until maybe mid February, depending on the harvested catch. Because 90% of all Maine shrimp are all caught in the Gulf of Maine by shrimpers there, local Massachusetts and New Hampshire fisherman have to work that much harder to bring in their catch.  I arrived in Seabrook, NH a little after 4:30 in the morning. A cold breeze of sea air blowing off the water, as I pulled on an extra fleece and rubber boots. I met Captain Ed and boarded the Sweet Carolyn, named for his wife, as he stowed a few crates on deck and the rumble of the large diesel engine pierced the complete darkness.  The Sweet Carolyn, a 45 footer made in 1986, has been Ed’s workspace since 1988 when he first started working on it as a deckhand.  It is his now, free and clear, and one of a number of vessels in his personal fleet of fishing boats.  Shortly after I arrived, crew member Jimmy Basnar, arrived with Dunkin’ Donuts in hand. As we shoved off, and he lit a Winston, Jimmy said to me, “Do you smoke? … Do you drink? .. We’ll you’ll do both by the end of this trip,” with a laugh.

With a tin of Copenhagen in one hand and the the throttle in the other, Captain Ed guided us out of Seabrook Beach in the pitch dark, snaking our way around sand bars and between boats, before heading to the open water and due east about ten miles.  With an authentic New England accent Cap’n said the best part of being here was that “I’m my own boss.” He continued, “I grew up doing it since I was a kid, and when I turned 19 I got my captains license. I just enjoy it … ” ending with a hearty laugh and a smile, “I don’t have to answer to anybody but my wife.”   Just after sunrise Jimmy, who has been with Ed on the Sweet Carolyn for two years, began setting the nets.  “It’s a 75 foot sweep,” explained Cap’n Ed, “and 90 feet long.  The doors spread the opening,” and “we’ll be fishing at about 50 to 52 fathoms.”  As the net rolls out, Jimmy works to guide it, and attaches the doors as the final piece of the net slips overboard into the cold clear North Atlantic.

As the first haul came in, after two hours of dragging, Captain Ed and Jimmy realize that they almost nothing to show for it.  Slightly frustrated, the they reset the net after realizing the catch was inadvertently left open during the first trawl. “Things happen” said Cap’n as he guided the boat on another path once the net was out, hoping the next haul will make up for it.

After I took a short nap in a fold up chair inside the wheelhouse, the pitch and yaw of the waves rocking the ship like a baby, I was stirred awake by Jimmy pulling on his rain gear as he headed out to bring in the nets.  This time the pay off was better, but light, and contained some herring and mackerel, not what we were really looking to bring back.  After the third haul, which brought returns similar to the second, Cap’n Ed decided to turn the Sweet Carolyn around and we started back toward port as Jimmy separated the remaining shrimp and loaded them into boxes. On the way back I took the time to ask Captain Ed what was the best thing about his job.  “I just love the ocean,” said Captain Ed Eastman,  “I don’t think I could do anything else, I never have.” He continued  “if I couldn’t do this I don’t know what I’d do.  I just keep doing what I do …  I try to lobster fish, I shrimp, gill net for dogs (dogfish) and keep myself busy … and try to make a years pay at doing what I’m doing.”   It wasn’t a great day of shrimping for the Sweet Carolyn, and Jimmy summed it up saying “We made the fuel, so we get to go again,” referencing the fact that the shrimp they caught and sold paid enough to cover the $200 dollars in fuel used in a day, but not much more.

For me it was an amazing look into the local fishing scene, and another enlightening glimpse at the efforts local farmers and fisherman make on our behalf.  I am humbled and privileged to have met Ed and Jimmy, both of whom have salt water in their veins, and I would encourage everyone to go out and get some Sweet Maine Shrimp while you can.  I had the most amazing scampi this evening, shrimp complements of Ed and Jimmy, and as Ed said when I asked him the difference between Maine Shrimp and the stuff we usually find in the store, he replied “these here, there a delicacy, but they are not a big shrimp, but they are very flavorful.”

Justin Ide is a veteran photojournalist and former Peace Corps volunteer. He has recently turned to food and food industry photography realizing that is where his heart and soul reside. When not on assignment, Justin can be found chasing wild trout with a fly rod, or cooking in the kitchen with his wife Susan, under the watchful eyes of their two Labrador retrievers, Utah and Normand.

How to Make the Perfect Cream Puffs