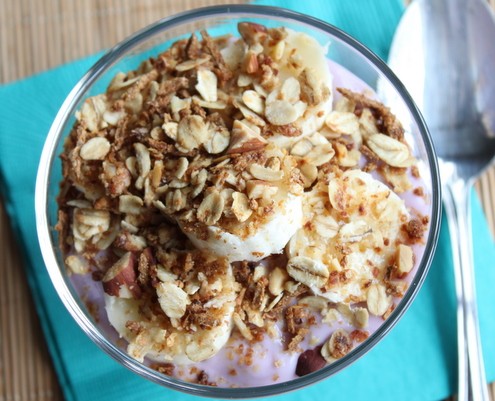 Making your own granola is something Honest Cooking applauds. Healthier, tastier and a lot more fun than store bought versions.
Text And Photo By Kelsey Hilts

Granola, originally known as granula, was invented in the United States in the late nineteenth century.  Many people claim that it was re-invented during the 1960’s when fruit and nuts were added to the mix to make it more of a health food.  There is no set recipe for granola but it generally consists of oats, nuts and sometimes dried fruits that are baked together with honey until crunchy.

Many store-bought versions of granola are loaded with excess sugar and other unnecessary preservatives and ingredients.  But because granola is so easy to make, there really is no reason not to make it at home so that you can control what is in it.

This version of granola is full of fiber and other healthy ingredients.  I got the recipe from my aunt but I often adjust it according to what is in my pantry, experimenting with different combinations of nuts and seeds.  I like to sprinkle it over low-fat yogurt for a satisfying breakfast or snack.

1. Toss all of the ingredients together.  Spread them onto an ungreased baking sheet.  Bake the granola at 350°F (175°C) for 15-30 minutes.  The granola will turn golden brown when it is done.  Watch it closely and stir it frequently (every 5 minutes or less) so that it doesn’t burn and stick to the pan.  Stir it when you remove it from the oven and then let it cool on the pan.  Store it in a sealed container. 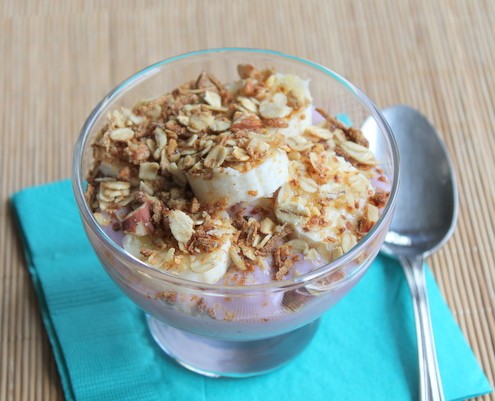