How to Perfect Your Madeleines

Gaúcho-Style Flatbread or “Grilled” Skirt Steak (fraldinha) with Chimichurri Sauce Flatbread is an ultimate Brazilian creation. A dish that is prepared using Soy Sauce as a marinade. It is a recipe that can be served as a quick main dish or as an appetizer, once sliced.
By Denise Browning 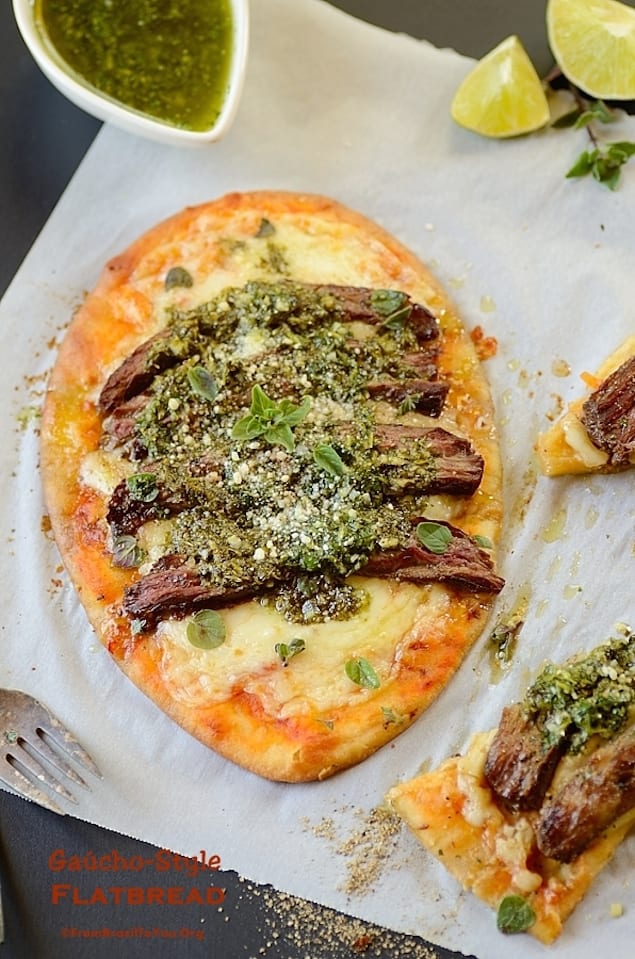 Gaúcho-Style Flatbread or “Grilled” Skirt Steak (fraldinha) with Chimichurri Sauce Flatbread is our ultimate creation… a dish prepared using Soy Sauce as a marinade, natural browning ‘agent’, and flavor booster. It is a dish that can be served as a quick main dish or as an appetizer, once sliced.

Our gaúcho-style flatbread is a family favorite recipe! The term gaúcho (Portuguese: [ ?a?u?u] ) refers to Brazilian ‘cowboy’ from Southern Brazil as well as to residents from the state of Rio Grande do Sul. In Southern Brazil, skirt steak (or fraldinha — traditionally only salted and grilled) is a popular dish which is often served accompanied by chimichurri sauce, the South American pesto. This green sauce is originally from Argentina, yet widely consumed in Southern Brazil. Having leftovers permitted me to use both the skirt steak and chimichurri sauce as toppings for this flatbread (and pizzas), as well as fillings for sandwiches and tacos.

Print
Prep Time
30 mins
Cook Time
10 mins
Total Time
40 mins
“Grilled” Skirt Steak marinated in soy sauce with Chimichurri Sauce is an ultimate Brazilian creation. It can be served as a main dish or an appetizer.
Author: Denise Browning
Recipe Type: Main
Cuisine: Brazilian
Serves: 4
Ingredients
For the Skirt Steak:
For the Chimichurri:
For the Flatbread:
Instructions
Prepare the skirt steaks:
To prepare the chimichurri sauce (a type of South American pesto):
To assemble the flatbreads:
3.2.1275
See Also
Featured