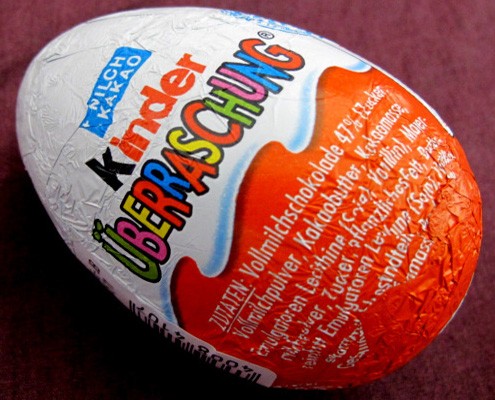 This iconic German sweet turns out to be Italian. And it is still classified as contraband in the US. Steen Hanssen reports from Berlin.
Text And Photo By Steen Hanssen

“Kinder Überraschung” is perhaps one of the most iconic of all German sweets for children. Every German child has grown up with the Kinder surprise egg and from my own childhood in the 1970’ties I have strong memories of pestering my mom to buy me a Kinder egg while shopping. Today with my six year old daughter the spectacle is played out once again but unlike me she usually wins.

The Kinder chocolate brand is in fact not German at all. It’s produced by the Italian company Ferrero, who are also behind the equally iconic “German” chocolate bread spread “Nutella”. Still recall the profound chock of learning this, much like discovering that Haribo gummi bears and the Haribo salty liquorice “Piratos” were not from Denmark but indeed invented and produced in Bonn, the former capital of West Germany.

Inside the 20g white and dark chocolate egg shell lies a little oval yellow plastic canister containing a small stick together toy including a tiny instructions manual. These toys have of course become collectors items and spurred significant online debate on the toy’s taxonomic rank, classification and hierarchy. There’s even a hard core sub-group of Kinder egg connoisseurs dedicated to collecting just the instructions manuals (called BPZ in German, which stands for Beipackzettel). These instruction manuals are considered much more rare and valuable and are widely traded at online auctions.

Critics have argued against the Kinder sales pitch of associating a toy with candy and in political correct circles it’s considered somewhat bad taste to give your kids any products from the “Kinder” brand, including the colorful annual Kinder Christmas advents calendar or even buying the “Nutella” chocolate bread spread. Responsible parents should of course only buy healthy sweets that are organic and fair traded with dried fruits, nuts and other boring stuff.

In America the Kinder surprise egg is classified as a contraband by the Food and Drug Administration (FDA). The FDA have declared Kinder eggs illegal referring to a 1938 Federal Food, Drug, and Cosmetic Act that prohibits embedding “non-nutritive items” in confections. This law was recalled in 1997 and accusations quickly arose that this was a result of successful lobbying from giant food producer Nestlé trying to keep out a competitor from the US market. However in rest of the world kids do love Kinder surprise eggs and other Kinder products and for this coming Easter I’ll surely hide a few eggs in the garden for the traditional Easter egg hunt…