Sandwiches. They’re the best thing to happen to lunchtime since sliced bread. Which is probably why so many of the world’s most talented chefs can’t resist experimenting with unexpected ingredients in an attempt to elevate the art of sandwich-making. They’ve certainly succeeded. From broccoli with peanuts to avant-garde cheesesteaks, we’ve traveled north, south, east and west to discover and share these 12 outrageously good sandwiches from across America. Napkin not included.
By Jennifer M. Wood 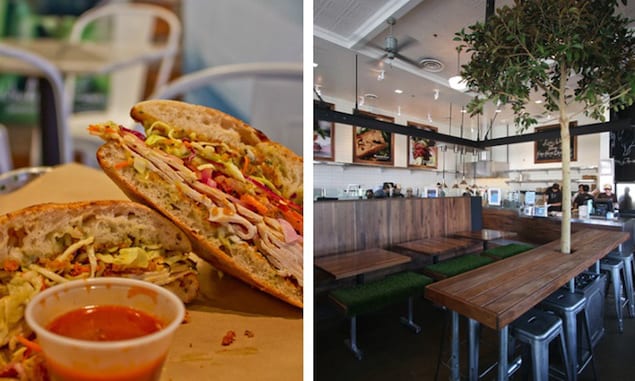 “Not So Fried” Chicken

Since 2006, the eco-conscious gastronomes at Mendocino Farms have been putting a handheld spin on classic entrees at each of their six Los Angeles-area locations. Their dedication to sourcing the best local and organic ingredients has resulted in the “Not So Fried” Chicken Sandwich, on which shaved and roasted free-range chicken is rolled in the restaurant’s signature “Krispies” for texture. “One of the most popular summertime dishes is of course, fried chicken,” says chef Judy Han of her inspiration for the dish. “I wanted to create a menu item that was healthier but just as delicious as the original.”

At-Home Tip: “To create this dish at home, you can utilize simple roasted chicken or even easier—a rotisserie chicken from your favorite market,” says co-founder Mario Del Pero. “Whip up a simple mustard slaw, add tomatoes and onions. For the Krispies: use tempura batter, add water and fry it up and top with a side of BBQ sauce.” 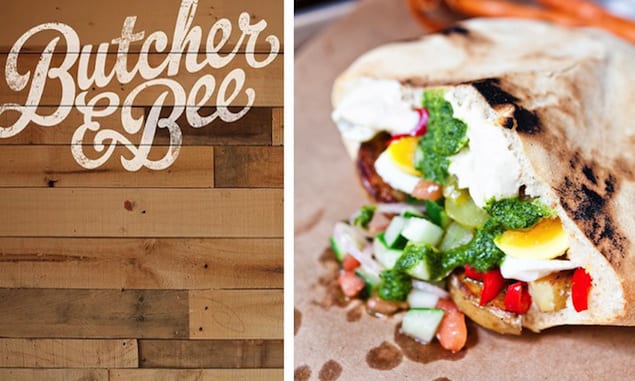 Diners never know what to expect at Charleston’s Butcher & Bee, as the menu (which is written on a chalkboard and shared via Twitter and Facebook) changes daily. But one sandwich that has proven particularly crave-worthy, and with good reason, is the Sabich, the restaurant’s new-fangled take on the popular Israeli pita. “This sandwich is personal to me,” says owner Michael Shemtov. “Growing up, we ate potatoes, hard boiled eggs and fried eggplant on Saturday mornings as our family meal. Putting these items in a pita is an idea that started in Israel, but bringing it to the South was our idea.”

At-Home Tip: “Each component is important to the overall flavor,” says Shemtov, who warns: “don’t skip the tahini, Israeli salad and schug. Also, layer the wet ingredients through the pita with the potatoes and eggs, so you don’t have a bunch of dry stuff at the bottom of your sandwich.” 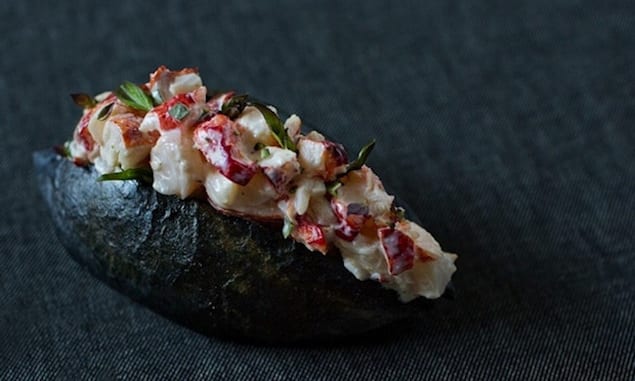 Now here’s a sandwich that’s almost too pretty to eat. But you will. And you won’t regret it. At Hinoki & the Bird in West Los Angeles, chef David Myers puts a distinctly Asian twist on a New England staple with his green curry and Thai basil lobster roll, which he serves on a charcoal bun. “We wanted to have a fun twist on one of my favorite classics,” says Myers of the popular summertime sandwich. “The lobster is cut up and seasoned with a Vietnamese green curry aioli and fresh shallots. I love the depth of the curry as well as the slight heat it invokes.”

At-Home Tip: “At Hinoki & the Bird, we make the roll with 20 percent Japanese charcoal powder, which lends a fun color to the soz bun and a nice contrast to the lobster itself,” says Myers of what is probably the toughest element to replicate. “It was the genius idea from our executive chef Kuniko Yagi. If you are making this at home, you can use any soz roll for the bun, like a brioche roll or even a hot dog bun.” 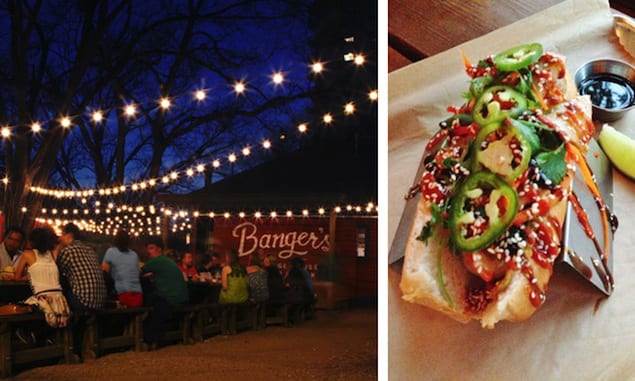 Don’t let the self-described “sausage house & beer garden” label fool you: the menu at Banger’s in Austin is anything but straightforward. Case in point? The Koreaninspired Dak Bulgogi, a Bulgogi chicken sausage topped with Sriracha, kimchi, oyster sauce, cilantro, carrots and jalapenos with a side of soy caramel for good measure. “The inspiration was pretty simple,” says head chef Ted Prater. “I love the taste of
Korean food and so I wanted to see if I could incorporate that into a sausage.”

At-Home Tip: “Just stay true to traditional Korean spices and let those do the work for you,” says Prater 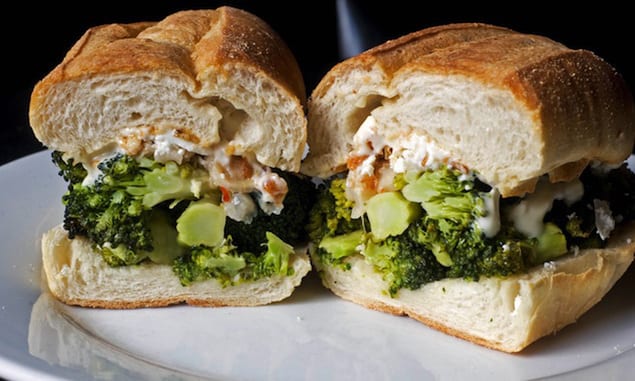 Who says only carnivores get to have all the sandwich-eating fun? At New York City’s No. 7 Sub, which boats two locations in Manhattan and two in Brooklyn, the chefs experiment with everything from zucchini to cauliflower. But broccoli seems to be the
reigning crucifer. “Broccoli is far and away my favorite food,” says chef Tyler Kord, “and I wanted to make it the star of a sandwich. I picked lychees to give it a bright, sweet and spicy pop; ricotta salata to give it a salty, briny component; mayo for creaminess; and peanuts and fried shallots for crunch.”

At-Home Tip: “Any vegetable can be great on a sandwich,” insists Kord. “The trick is cooking it in a way that keeps it meaty and crunchy, because overcooked and watery makes for a sloppy sandwich…it’s nice to have something pickled, something salty, something creamy and something crunchy.” 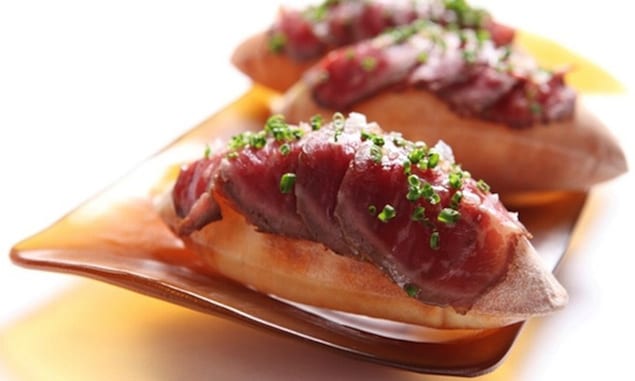 Located within the SLS Hotel in Beverly Hills, The Bazaar by José Andrés is one of the City of Angels’ hottest tables. But popularity
doesn’t have to mean pretentious. Nope, not even in Beverly Hills. Among the chef’s most daring creations is the Philly Cheesesteak, an avant-garde incarnation of the sometimes-sloppy east coast comfort food, this one made with Wagyu beef, topped with hot cheddar cheese and served on air bread. “The Philly Cheesesteak is my way of paying tribute to an American Classic,” says Andrés. “The dish originated at minibar in DC [in 2005] and quickly became very popular. We now only have it at The Bazaar in Beverly Hills, but I think one day we will export it to the whole world.” 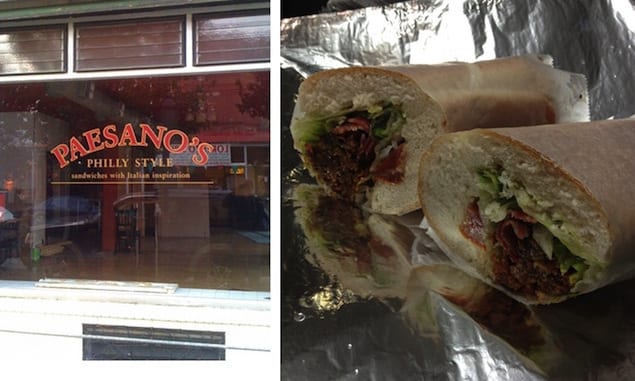 If L.A. can be known for its Philly cheesesteaks, then Philadelphia can certainly make a case for being the country’s Italian sandwich capital. You’ll find the best of both worlds at Paesano’s, which describes its menu as “Philly style sandwiches with Italian inspiration” and orders a tasty lineup of innovative eats. Among them is the Liveracce, a sweet/salty/spicy mix of crispy chicken livers with salami, roasted tomatoes, sweet orange marmalade, gorgonzola spread and much more. “The inspiration for the sandwich is from the people of our city, and in the city people eat what they can rather than what they prefer,” says partner Nathan Baynes. “This is a modern day twist on peasant food.”

At-Home Tip: “For anyone making this gem at home, be sure to add a little black pepper and smoked paprika to the flour before tossing the marinated livers,” advises Baynes. “[It] adds seasoning to the core of the sandwich.” 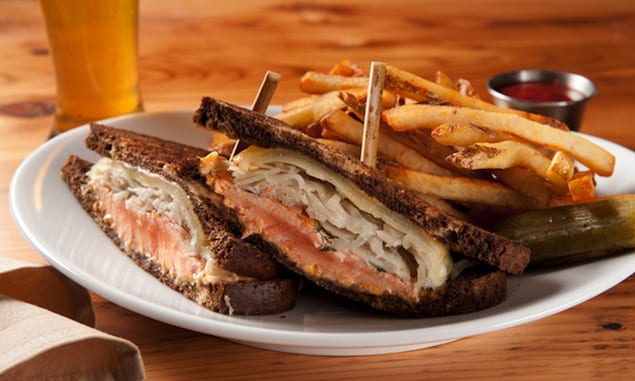 Short of leaving out all of the good stuff, how can you up the healthy factor of a Reuben? Executive chef Kevin Humphreys of Spur Restaurant & Bar at Jackson Hole’s Teton Mountain Lodge has the answer: Salmon. “The inspiration behind the Twisted Reuben came from wanting to use a healthier alternative, such as fish, as well as simply wanting to do a fun twist on what is a somewhat traditional sandwich,” says the award-winning chef. “I use picked fennel and onion instead of sauerkraut, Haystack Havarti instead of Swiss [cheese] and tomato aioli instead of the Thousand Island dressing.”

At-Home Tip: “Pickle the fennel and onion a few days prior to making the sandwich and the salmon should be cut thinly at an angle to create a large enough piece to cover the bread and to give the sandwich a slimmer profile so it’s easy to eat,” says Humphreys. 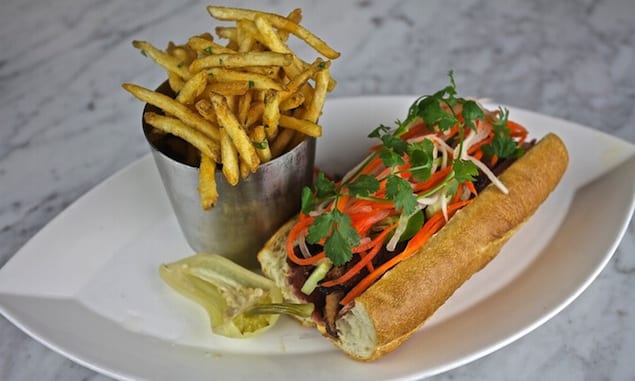 Leave it to a Vegas chef to up the ante on a traditional Vietnamese sandwich. Inside The Venetian, (http://www.venetian.com/) renowned chef Anthony Meidenbauer has turned what could have been just another gastropub into a truly exciting dining adventure. “We have a lot of great Vietnamese restaurants in Vegas, and I love a great bahn mi sandwich,” says Meidenbauer. “So this was my tribute to a favorite lunch delight. A great bahn mi should always be simple and fresh with bold flavor and I think we pulled that off.”

At-Home Tip: “Start with a good fresh baked baguette,” recommends Meidenbauer. “We use pork belly, which can take more time to cook properly, so you can always use pork butt, simply sliced and marinated in some soy and chili, then grilled. For the pickled vegetables, just slice some carrots and daikon radish, bring one cup of rice vinegar and a half-cup of sugar to boil, then pour over the veggies, allow them to cool, then refrigerate.” 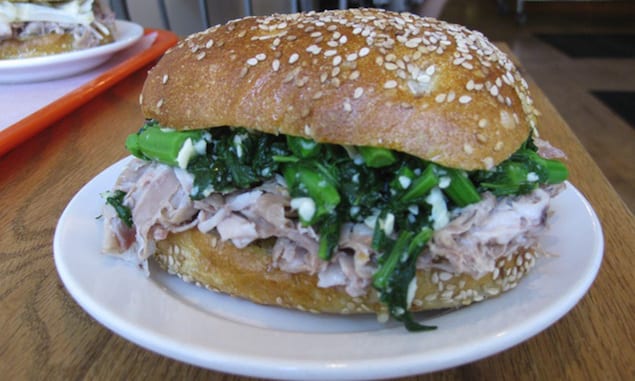 Baked beans and cream pies just weren’t enough of a culinary legacy for the Boston based sandwich artisans at Cutty’s. So each Saturday, they create a special, one-day only Pork Rabe sandwich—chock full of slow-roasted pork, sautéed broccoli rabe and
sharp provolone cheese on a sesame seed roll. “I lived in Philly for a bit, where the pork/rabe/prov combo is king,” says owner Charles Kelsey. “Our version is an homage to the great places, like Tommy DiNic’s, John’s Roast Pork and Tony Luke’s in the City of Brotherly Love.”

At-Home Tip: “Making the meat is super easy,” says Kelsey. “Liberally salt a pork butt and refrigerate it for a couple of days (this really helps to tenderize and season the meat), then all you have to do is slow roast it in a 300-degree oven for a few hours until it’s tender. When you make the sandwich, don’t skimp on the sharp provolone and make sure to use the most expensive extra-virgin olive oil you can afford.” 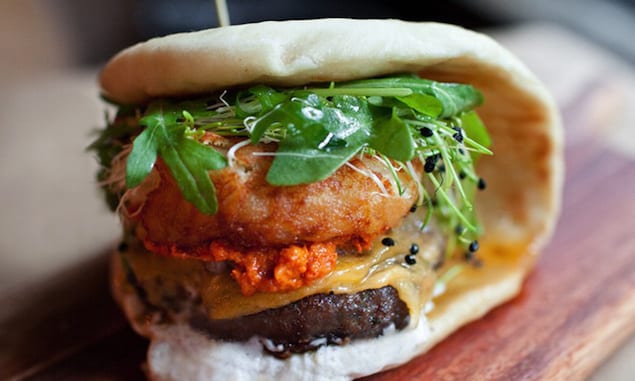 There’s a sandwich revolution happening in Downtown L.A. Call it the Bäco Movement. Because that’s the name that chef Josef Centeno has appropriated for the flatbread sandwiches he has developed as his signature. Beginning with a crispy pork belly and beef carnitas version, Centeno’s sandwich lineup now numbers more than a half-dozen varieties, including The Toron, a mix of oxtail hash, cheddar tater and horseradish. “It’s a burger that’s not a burger… inspired by a burger,” says Centeno of the popular creation. “It’s what I think of as the flavors of a good middle American diner burger with my twist, in a bäco form.”

At-Home Tip: “You can’t… that’s why you’ve got to come in,” says Centeno. “In seriousness, it is a pretty labor-intensive sandwich and a complicated recipe, but what isn’t complicated is the idea of a creative take on familiar flavors. This is my unique spin, but in that spirit, I’d tell people to just play with these flavors and see what happens.” 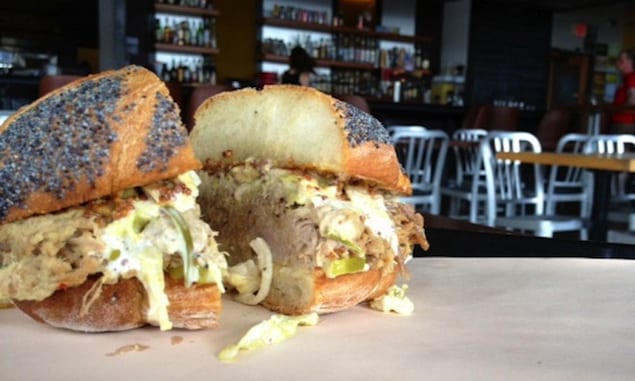 Southern-style pork is getting a Pacific Northwest makeover at Bunk Sandwiches in Portland. Less napkin-needing than its Carolina counterpart, this popular eatery’s version comes with apple cabbage slaw, pickles and mustard. “The inspiration for the sandwich was the classic Carolina-style pulled pork sandwich with coleslaw,” says co-owner Tommy Habetz. “We didn’t have a smoker at our first Bunk Sandwiches location (we didn’t even have a hood), so we decided to reserve our bacon drippings from the bacon for our breakfast sandwich so that we could confit the pork for the pulled pork, infusing the pork with the bacon’s smokiness.”

At-Home Tip: “That would be my tip to the home cook,” Habetz continues. “Save your bacon drippings!”