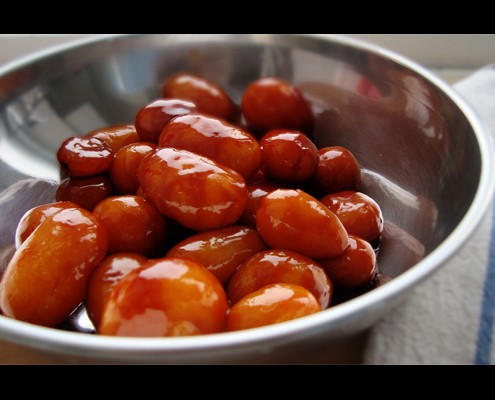 These sweet and sexy looking spuds are a must on every Danish Christmas table.
By Kalle Bergman

Before I met my Danish wife, I was convinced that the highest level of “fullness” a man could reach was through the Swedish Christmas dinner. In my world, three hours of constant buffet eating had to be the most heavy and numbing food experience anyone could be exposed to. A wall of small dishes, from cold to warm. First an exuberant and almost aggressively hungry pace, the first cold plates of herring are devoured easily. Then slightly slower over the meatballs, Christmas ham and prince sausages. Fork and knife are rested more often than before. Finally, in time for Janssons Temptation, rather desperate expressions are shared across the table. Scattered sighs, as participant after participant realize that there are still dishes on the buffet that has not been tested yet.

The Swedish Christmas fullness is special (and very dear to me). It is numbing, heavy and swelling – and for a long time I believed that this was the Everest of fullness.

But that all changed when I met my wife.

Because I didn’t know that there was another door. That somewhere, right in the very darkest and most distant corner of the Swedish Christmas fullness, was a slightly lit last door. A door with a discrete warning sign. A door with the text “Danish Christmas Dinner”.

The Danish Christmas dinner is a 9 on the Richter Scale. A Defcon 1. Why? Well, first of all it incorporates all the ingredients you need to make a belly bursting culinary atomic bomb. Butter, sugar, potatoes, pork, duck, fat, cream, cherry sauce, red wine, jelly, cream and a little bit more cream. But the ingredients themselves are not the main issue. Because if it was all in the fat and the carbs, you could just eat a little bit less of everything and steer clear of food coma. No, the main problem with the Danish Christmas dinner is that it is so amazingly good that the “eat less method” is almost impossible to implement. A small bite more turns into two small bites more. Two turns into three, and three turns into burst pant buttons, meat sweats and dinner guests lying stretched out on the floor. It is the Danish Christmas Curse.

One of the key players on the Danish Christmas table is the Brunede Kartofler – Browned Potatoes. Christmas time is tater time in Scandinavia (hell, any time is tater time in Scandinavia), and these ones might just be the sexiest spuds alive. Small boiled potatoes, cooked in butter and melted sugar. Golden, sticky and sweet. Wonderful and deadly at the same time. A perfect representative for the Danish Christmas Curse.

Print
Prep Time
10 mins
Cook Time
30 mins
Total Time
40 mins
On the Danish Christmas table, this is probably the most classic side dish.
Author: Kalle Bergman
Serves: 4-6
Ingredients
Instructions
Notes
TIP: During the rest of the year, I like to spruce these potatoes up with a little fresh sage or chopped chili at the end - but for Christmas, I always serve them in this traditional manner.
3.2.1230