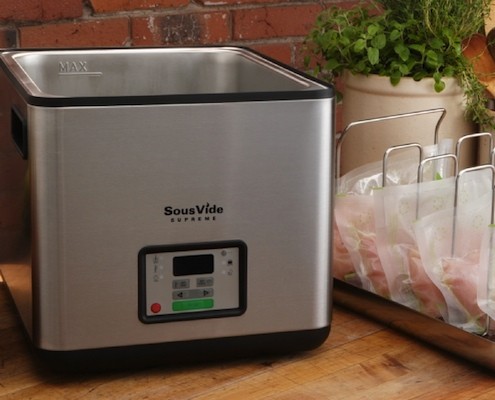 Stocking Up for Better Home Cooking

The basic idea behind the sous vide cooking technique is simple. Vacuum pack the ingredient you want to cook, then immerse it in warm water and keep it there for a shorter or longer time (depending on what you’re cooking, that can range from minutes to days).

The result is meat, fish, poultry and vegetables – cooked perfectly and evenly without that ever present pressure of removing it from the heat at an exact time to keep it from over cooking.

Sous vide has been around since the 70’s, but caught the attention of a new generation of chefs during the last 5-10 years. Now, it’s a staple technique in ambitious kitchens across the globe and has started to move from industry to home cooking in the last two years or so.

The SousVide Supreme came along in 2009, as one of the first ever sous vide products aimed at the ambitious home cook and restaurants that couldn’t afford the more expensive industrial machines available. The product has been well received all around, and this Christmas the company aims at becoming the culinary Christmas gift of the year by launching a Holiday Promo Pack priced at 469 USD. Honest Cooking decided to kick the tires and take it for a spin to see if it keeps it’s promises. 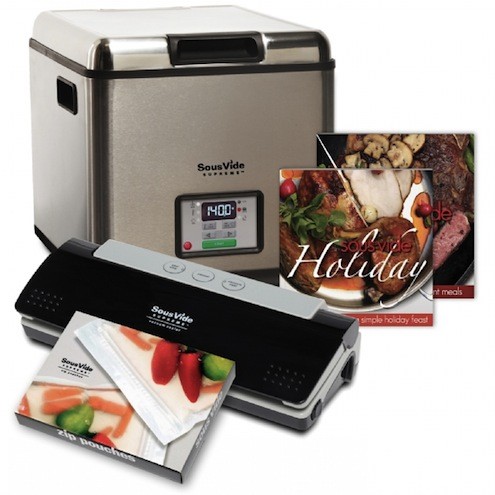 The promo pack contains the SousVide Supreme water oven, a vacuum sealer, a box of vacuum bags and 2 sous vide cookbooks. Basically everything you need to be able to cook like a pro in your own kitchen. The oven measures 9.9”/12.6”/6.8” – like an oversized car battery (but doesn’t way nearly as much, so it can be easily moved). 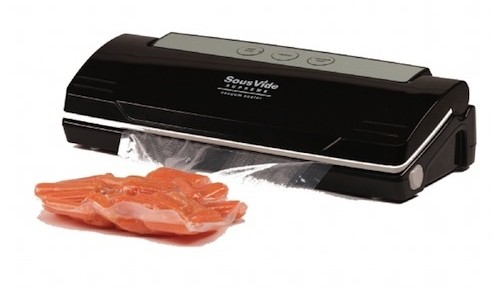 VACUUM SEALER
The vacuum sealer is your first step towards sous vide heaven. This machine sucks the air out of the bag, and seals in all the juices and spices. The process is simple. Place your proteins and spices in the vacuum bag, move the bag to the sealer and press a button. 10 seconds later, it’s signed, sealed and all you need to do is deliver it to the water oven. 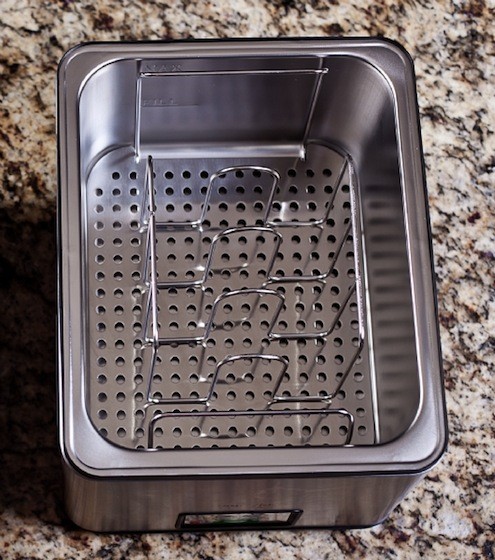 WATER OVEN
The water oven is a large car battery sized metal box with an LCD display in the front and a removable lid. Operating it is super simple. Just add water to the “fill” mark, turn the machine on, choose a temperature and press “start”. When the water reaches your target temperature, drop in the vacuumed packed ingredients, and well – go about your day. Come back a few hours later, and your meat (or what you’re cooking) is done. If you’re a little late – don’t worry. Unlike cooking in an oven, sous vide doesn’t overcook even if you overcook (fish and poultry can become a little mushy if you cook it for hours and hours more than recommended). 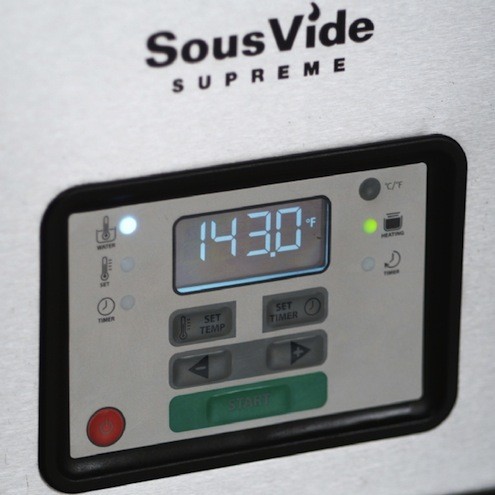 One thing you need to know is that sous vide doesn’t do Maillard reactions. This means that meat will come out perfectly cooked – but it won’t have that sexy grilling / broiling brown crust we all love. The solution to this pretty straight forward. For a steak, take it out of the vacuum bag when it’s done, and give it a minute on each side on a super-smoking-hot grilling pan before serving.

Sous vide works extremely well with almost any kind of food. A large expensive rib eye, cooked for 7 hours at 133F is perfectly red all through. And cheaper cuts benefit even more from sous vide. Brisket and shortribs, cooked for 48-72 hours come out juicier and more tender than ever.

Oysters, pad dried and then vacuum packed, cooked for one hour at 140F has the flavor of oysters but the consistency of mussels. Chicken is cooked through, but without losing consistency and juiciness. Same thing with fish. Bye bye to dry.

And burgers. Oh, the burgers! Medium rare through and through with just a very thin brown crust from the pan – it’s juicier than you can imagine.

FINAL JUDGEMENT
The newest kitchen gadgets are usually bought by the more advanced home cook, but the best thing with the SousVide Supreme is that it is so super simple to use and operate that you don’t even have to know how to cook to use it. Just vacuum pack your meat / poultry / fish, dunk it into the water at the desired temperature – and that’s it. Even the dummiest of dummies will be able to cook perfectly red steaks with this technique.

Honest Cooking is actually a little bit in love with this product. We’re sous-vide cooking everything at the moment, and we’ve yet to find something that doesn’t come out great. Over the next few months, we’ll be featuring our favorite sous vide recipes here – so keep watching this space.